I’ve never forgotten that ex-soldier telling me his reason and it’s why I’m so passionate about anti-war stories like Charley’s War and Ragtime Soldier, its natural successor, now available as a free download https://www.millsverse.com/download-great-war-dundee-comic/

It tells the story of a young soldier at the Battle of Loos and asks the question everyone – including myself – rarely asks: Why? And it provides a chilling answer that makes provably more sense than the establishment historians lies.

The ex-soldier I met was a traveler and an eco-saboteur and the original basis for the character Finn in Third World War. He was one of those ‘nose-ringed climate change crusties’ that Boris Johnson loathes. I asked him why he joined the army and he said because of “A love of the Green and because I read war comics as a kid.”

I was writing a further story for Crisis about British soldiers in Northern Ireland so I asked him about his grim experiences in a military prison in NI close to the border with the Republic. They were chilling. He’d tried to get a national newspaper – The Mirror – interested but they eventually turned him down. So it was left, once again, to comics to do the job our media should be doing, but are too scared of their masters to carry out. The story should appear in a later volume of Third World War now being reprinted.

As the co-creator of Battle comic, I took seriously what he had to say. ‘War is Hell but kinda Cool’ films like Apocalypse Now – and yes, Full Metal Jacket – were used to psyche up American soldiers before the first Iraq Invasion. And I believe the MOD have invested in some Action-man style toys. Glorifying war in boys stories has a long and dirty history that goes beyond George Orwell’s scathing criticism of them to before the First World War. The boys’ stories of that era were deliberately designed to psyche up a generation for the murder and mayhem of the trenches. So it’s no good pretending we don’t have a responsibility if we produce war comics.

I think it’s possible to make anti-war stories more exciting, funny and enthralling than ‘War is Cool’ stories, as Ragtime Soldier demonstrates. Not to mention Catch 22, M.A.S.H., or even – obliquely – Peaky Blinders. Those gangsters are the product of WW1 and its stance on the war in the trenches is far from glamorous.

Writing Charley’s War and Ragtime Soldier is for me a kind of penance for co-creating Battle. Anti-war is the one genre where I wouldn’t have minded my story being ripped off, but fat chance of that! Why? Because it takes three times as much effort to write an anti-war story: you have to think more about your characters; there are more static scenes, and it takes more research, especially with the media blackout on WW1. Far easier for a hungry hack to write a story with lots of action and explosions and some bitter ‘War is Hell’ words of wisdom at the end.

The fact that mainstream readers – kids – made an anti-war story, Charley’s War, the number one story in Battle for longer than any other and preferred it to ‘War is Cool’ stories is an unpalatable fact that publishers – motivated purely by profit – will always ignore. That’s too uncomfortable for them.

But to get back to the origins of Battle: Warlord had just come out and was a million seller. So IPC asked John Wagner and myself if we’d produce a counterpart. I remember our reaction – as children of the 60s – was one of real concern. There was probably more awareness about glorifying war back then than now. The idea of ethical progression ‘onwards and upwards’ is an illusion, particularly in comics. The dull and dire forces of conservatism are ever there to crush innovation and creativity. We voiced our concern and publisher John Sanders said that maybe there was a compromise. Perhaps it could be part war and part adventure or historical. On that basis we went ahead.

We quickly realized it had to be all war if it was going to compete with Warlord, so we did Battle with all WW2 stories. I ‘took the King’s Shilling’. I felt – and I’m pretty certain John did, too – that if Battle had subversive elements it would make it okay. The principal one I recall was being ferociously against any officer heroes in Battle. Warlord, after all, had as its principal character a peer of the realm. Fuck that. So Sergeant was about as high a rank as any hero was likely to get. Obviously in time, long after I’d gone, this was to change but I think that subversive element was still there. Eazy may be a Major, but he sure don’t look like one! Hence why later on in Action I had the first German heroes in comics – to challenge the wretched British glorification of war, which is worse than ever today.

But it is in Charley’s War and now Ragtime Soldier where I really provided an alternative to attitudes and stories that are in desperate need of updating. I’m told Commando Comics are open to new thinking. I’ve seen some examples and it does look rather promising. But for me, the best way forward – a way I think I personally could learn a lot from – is in guerrilla comics. If you’re after something fresh, funny and powerful check out the work of Darren Cullen: https://www.spellingmistakescostlives.com/.

Darren’s Action Man: Battlefield Casualties videos are impressive and drew blood – The Daily Mail and The Sun came out spitting their hatred of them, so they were a genuine threat to the status quo. Good. We need writers with new energy like Darren in mainstream comics to challenge us, to make us think and to still provide commercial entertainment. Sadly, I’m not aware of any, apart from Darren.

Instead, ‘War is Hell but kinda Cool’ rules. 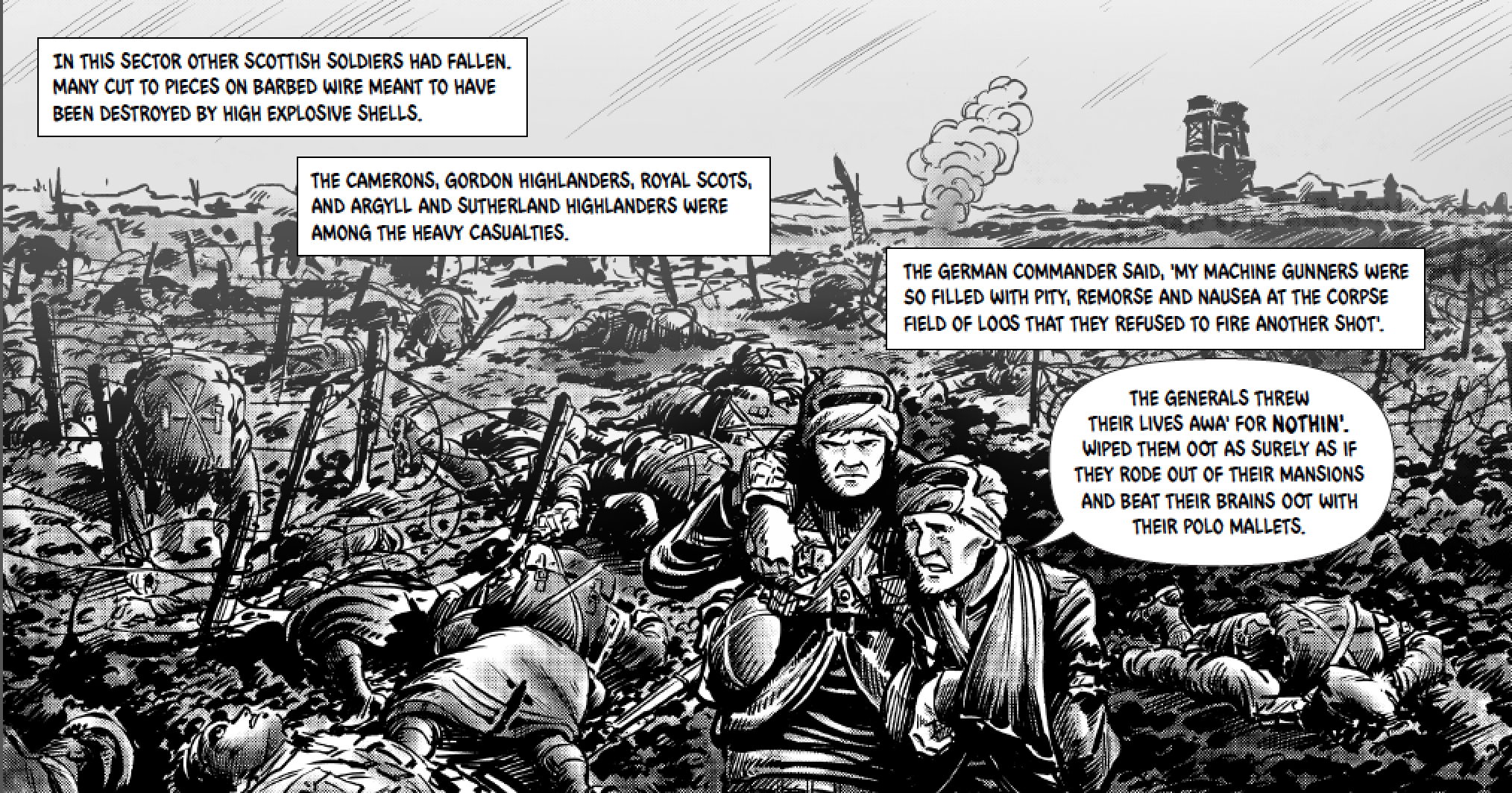