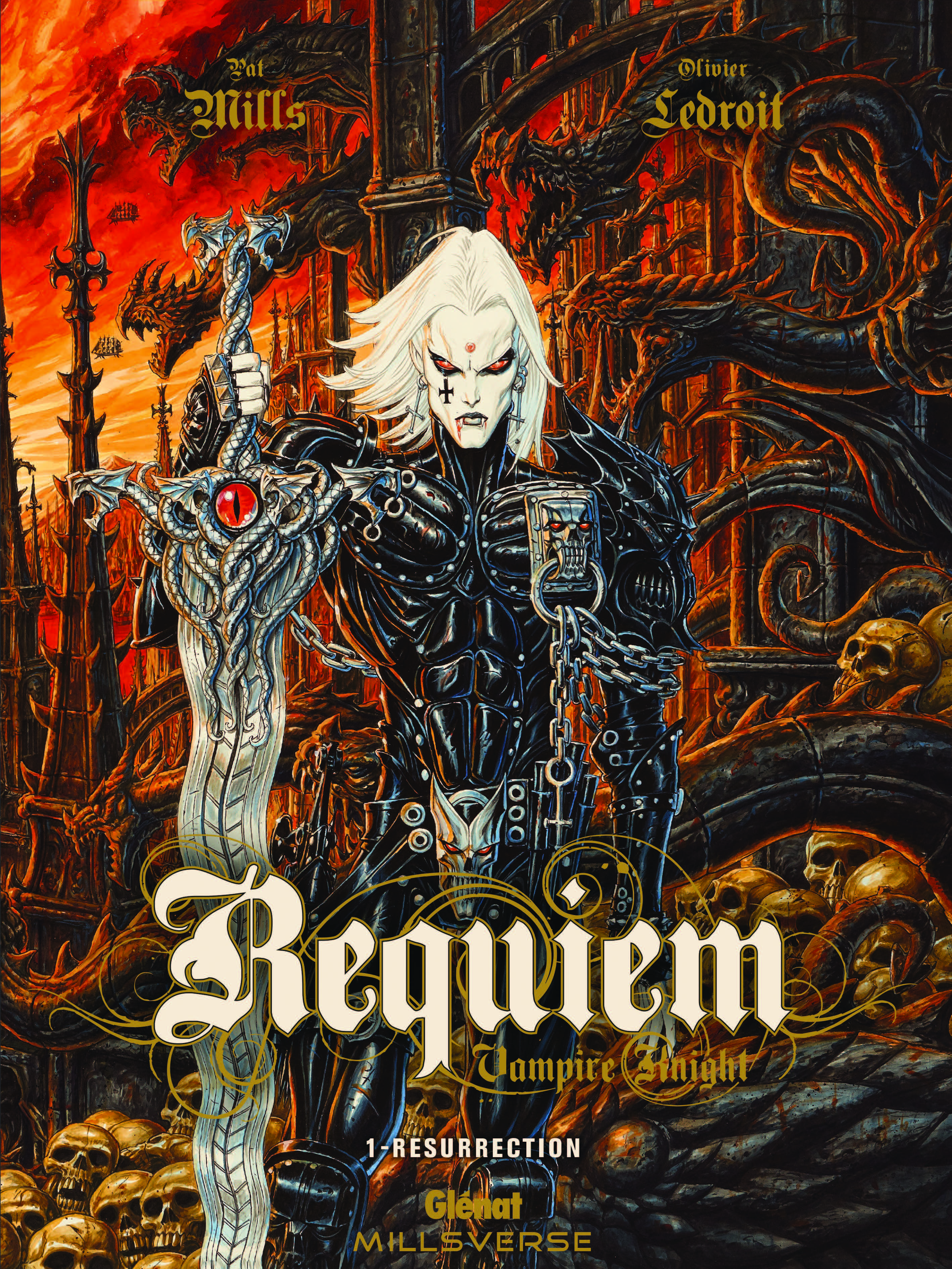 Hey Vampire lovers! Are you desperate to sink your fangs into digital editions of our best-selling graphic novel series, Requiem Vampire Knight?

I’ve heard from many of you guys on this issue, and some of you just aren’t into signing up with Comixology (where we’ve been selling the series for a couple of years now).

So we decided to make your day gruesomely better – you can now get your talons on DRM-free editions of volumes 1 and 2 over at our Gumroad store! We’ve made Requiem available as a PDF or a CBZ file, which we hope will suit most readers’ requirements, but if there’s a demand for another format, we’ll supply it.

These editions feature stunning new wraparound covers from Olivier Ledroit (included as a high res image in the digital pacakge).

The new releases are thanks to Editions Glenat, who took over the Requiem universe last year, and are doing a fantastic job reissuing and repackaging the series. To date, they have released the first three volumes in French print, with volume 4 due out in July. 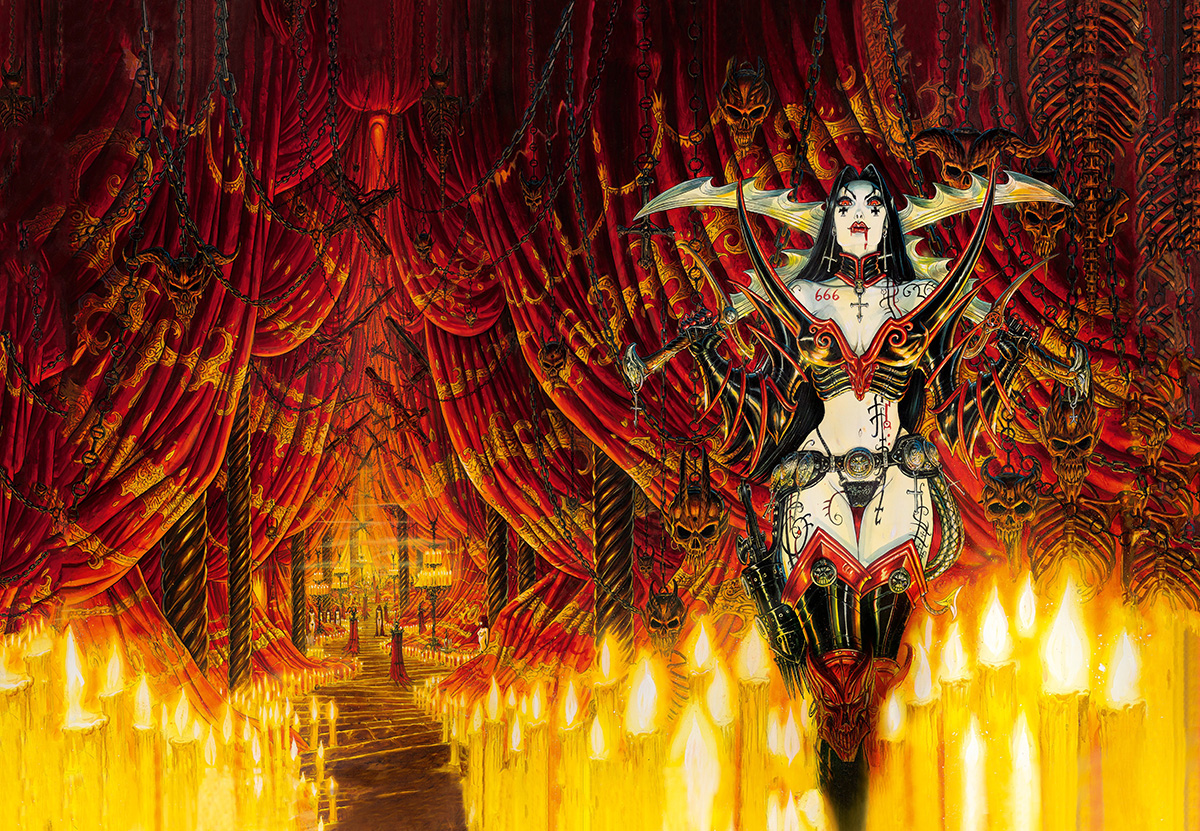 Even more exciting is the fact that artist Olivier and I are finally able to complete the series after a hiatus of several years. The long-anticipated volume 12 is due for French publication at the end of 2017, and we are hoping for a same day, English language digital release. We’ll then round off the series with volume 13 in the not too distant future… 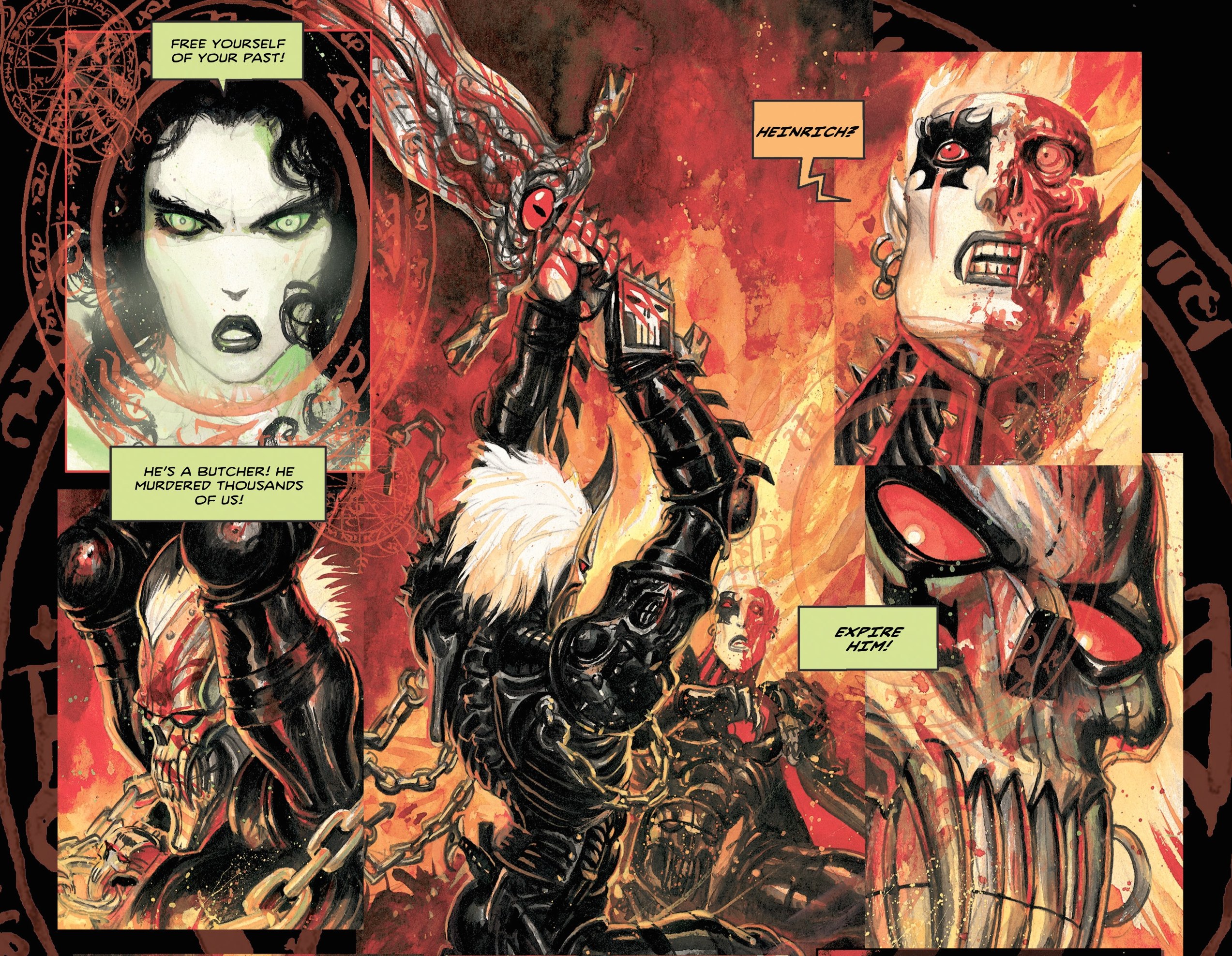 Rebecca urges Requiem to avenge her death. From Danse Macabre

Olivier Ledroit has to be among the top 10 living French fantasy artists. For readers who enjoy my work on 2000 AD and Marshal Law, and are looking for more of the same, you will find plenty of venom against the powers that be, and plenty of dark comedy, in Requiem Vampire Knight.For example, in the series you’ll find:

A thinly-disguised Mother Teresa as Mother Terror – Pirate Ghoul (Volume 2). I originally chickened out and tried to censor my own script, but Olivier had more balls than me and insisted on putting my full abusive version back in.

J. Edgar Hoover, in all his transvestite splendor on Earth and also appears as the Obergrosse Pirate Mitra – who out-Jabbas Jabba the Hutt 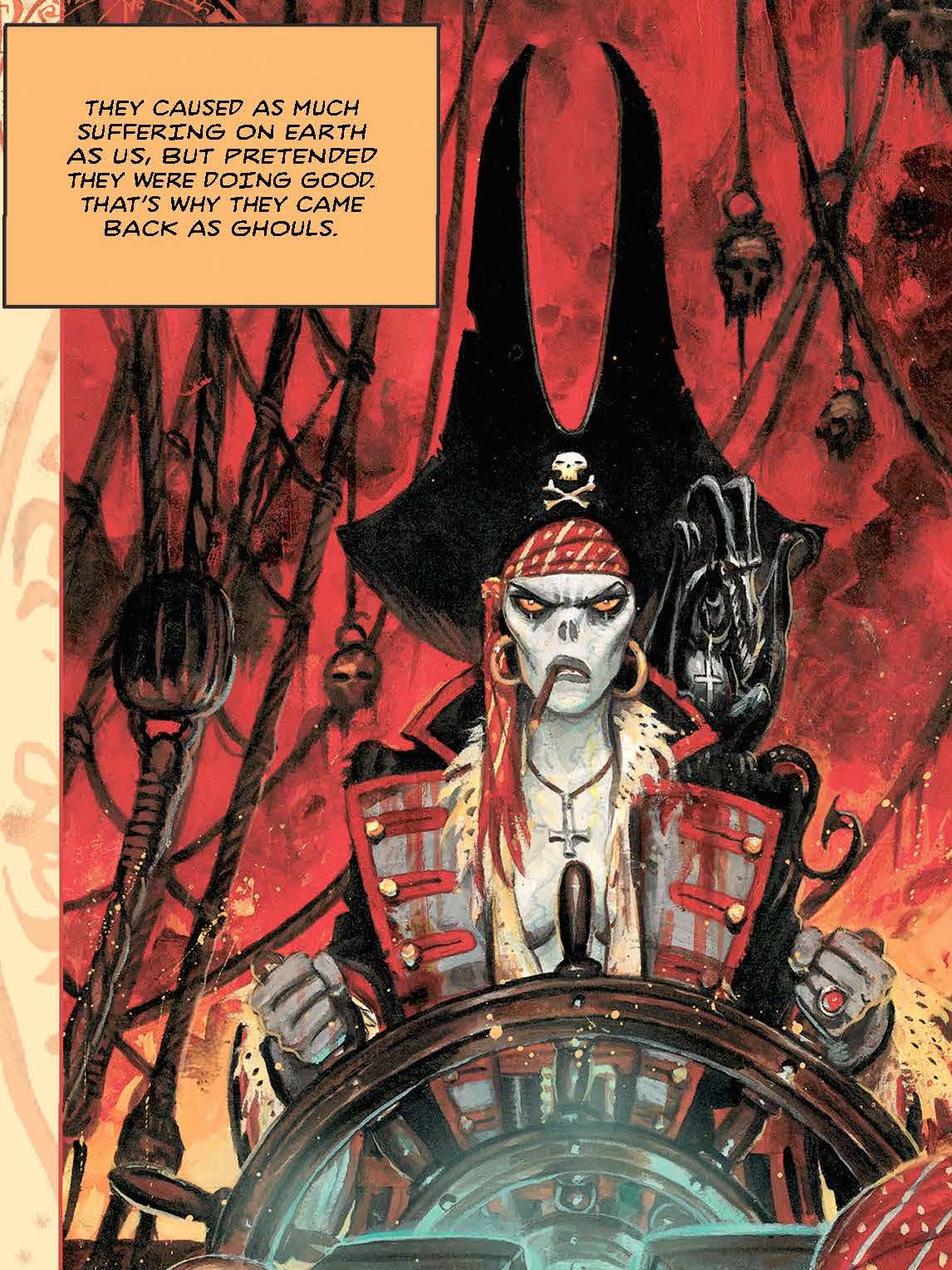 Aleister Crowley at his very darkest as Black Sabbat – the Chancellor of the Bank of Blood.Cute demonic characters, like the Devil’s Dictionary, in the tradition of Grobbendonk from Nemesis The Warlock.

Robosaurs knocking hell out of each other in a future war.

Bizarre Baroque weapons, such as the Piano Gun, reminiscent of similar crazy weapons in my story Defoe (17th Century Zombie Hunter.) Not to mention the holy water bullets, reliquary grenades and an Angelic missile, with “an authentic Seraphim inside”, for those with fond memories of the battle scenes in Nemesis The Warlock.

And 2000 AD fans will enjoy the reappearance of Torquemada, this time as a crazed werewolf. Yes, he’s still a religious maniac. I’m surprised you had to ask. 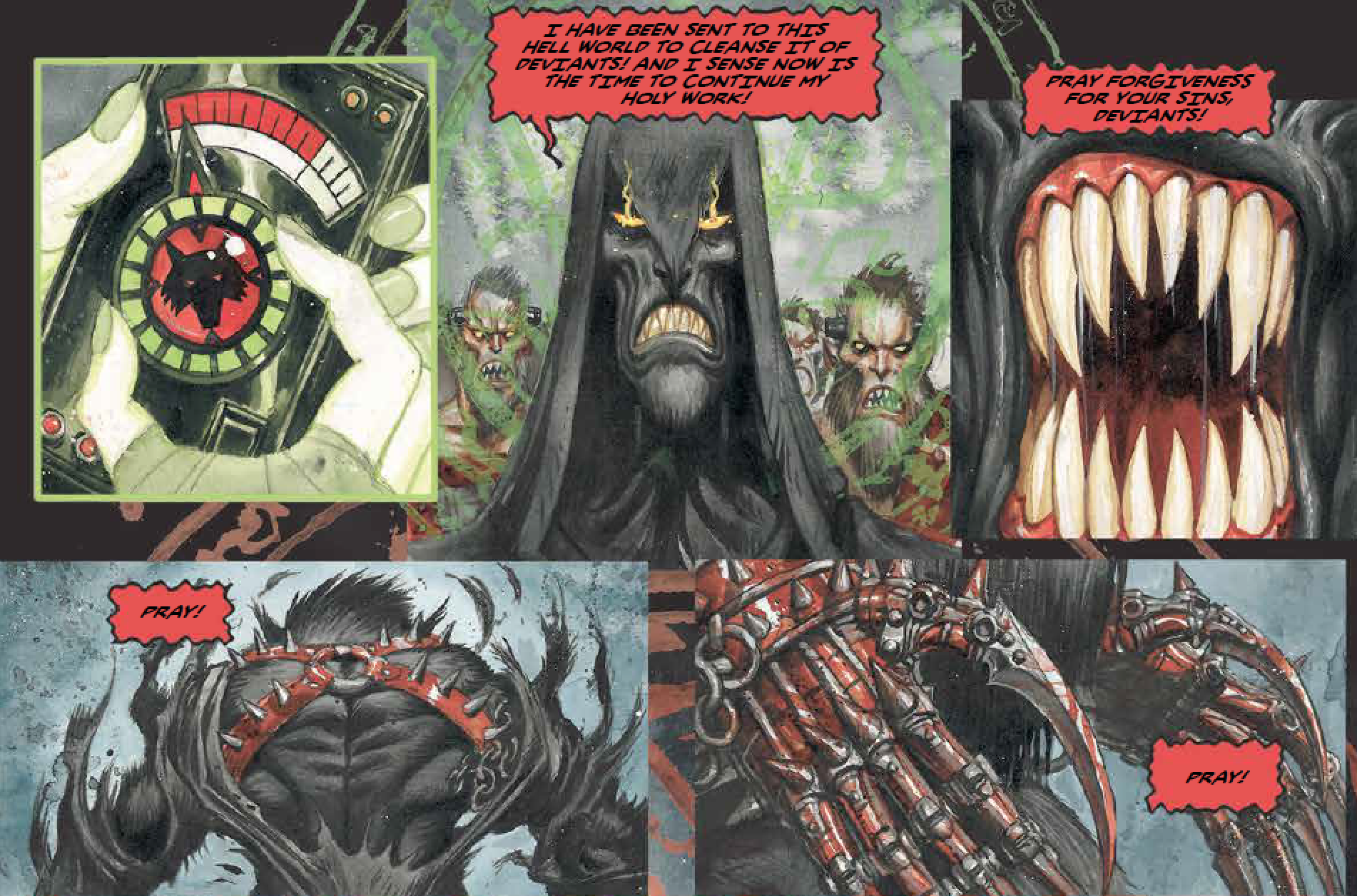 All in all, Requiem has a very Anglo-American/2000 AD quality about it – in fact, it was originally going to be bought by 2000 AD, but that’s another story…Check out Resurrection and Danse Macabre at Gumroad, and see what you think.

Hello Pat,
Was wondering if we will get to see Claudia vampire knight reprinted in a English language version similar to how you’ve packaged requiem?
Those heavy metal versions are hard to track down in the u.k and the quality of the one issue I managed to get is bloody poor.
All the best
Matt

I’m not sure what the plans are for a print copy – that’s something that new publisher Glenat will make a decision on. But I know that they want me and Franck Tacito to complete the series.

If there is enough interest, we’d release the existing Claudia’s digitallly in English. We have another two Glenat editions of Requiem to upload first, plus we want to get Requiem on to Kindle – so we’d definiteliy consider tackling Claudia at that point.

Thanks Pat and Olivier for continuing the series. It’s great to here that Vol. 12 and 13 will be published anytime soon. I already feared it was done for. In Germany we had a publishing house called “Kult Editionen” releasing Vol. 1-11 as hardcover issues but it has gone bankrupt since. Do you know if we will ever get Vol 12 and 13 as printed copies or do you have another publisher up in your sleeves (Finix?) to republish the entire series again?
All the best,
a huge fan of the series since its first days in the Heavy Metal Magazine

Hey, thanks for the Requiem love!

It may be a little early for Glenat to be thinking about foreign editions, but it’s useful to know the situation with the German publisher. I’m sure Glenat will get around to it eventually, and as soon as we know anything we will let you know.