Basing a character on someone in real life is just a starter, a jumping on point. Thus my version of Judge Dredd, notably in my Cursed Earth saga, is based on one of my old teachers – the grim and manic Brother James. Similarly, Torquemada, the sinister dictator in the Nemesis the Warlock series for 2000 AD is inspired by another old teacher – the notorious Brother Solomon, the self-proclaimed ‘Swinging Monk’, whose crimes are recorded on various websites, including my own. I’ve written about both characters in Be Pure! Be Vigilant! Behave! 2000 AD and Judge Dredd: The Secret History. But it’s more than finding some similarities to draw upon, like their black uniforms, their cold aloofness and fanaticism. There are significant differences, too. James’s moral compass was skewed, to put it mildly, while Dredd’s is not. So, invariably, we sample from real life, rather than base an entire fictional character on someone we know. 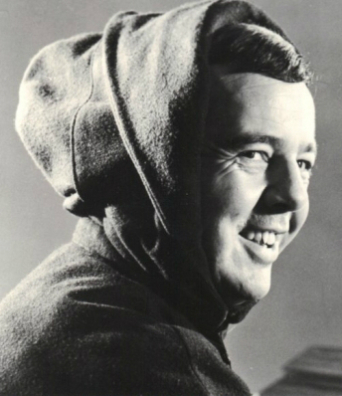 Mike Mercado AKA The Swinging Monk AKA Bro Solomon

So in the case of Dave Maudling, the protagonist of my Read Em And Weep series, he is not just a fusion of my co-author, Kevin O’Neill, and myself. Other elements come from elsewhere. For instance, Dave’s dislike of his young readers is an attitude that was sadly commonplace in comics at that time, but not one we shared or agreed with. So we took that element, amplified it, and created a character based on the W.C. Fields archetype, who supposedly hated kids. Editors also seemed to dislike their jobs as much as they disliked their readers; they saw working in comics as failure. They dreamed of escaping, by writing novels or working on more ‘prestigious’ magazines, but rarely did so. These unpleasant and negative attitudes are actually gold dust for creating a character. Today, if I meet someone with negative attitudes, chances are I’ll be following them around with my notebook. Here’s what Kevin and I did with them:
Greg looked up from reading the pages of The Caning Commando, The Spanker’s number one story. ‘Dave, what are we doing …? Two grown men editing The Caning Commando. It’s embarrassing.’

‘A teacher with a cane who single-handedly defeats the Germans?’

‘You forget we won the war. So we have a right to cane them.’

‘There must be something we can do to improve it.’

Dave shook his head. ‘Changing the Major’s story requires effort, which I’m not prepared to make and our readers are not prepared to read. We could shuffle the pages in any order and they wouldn’t notice, as long as there’s caning and there’s Germans.’

Greg steeled himself to look at the story again, shuddered, and shook his head sorrowfully. ‘I’m just praying I can find a publisher for my novel.’

‘Greg, you’ve only got one unpublished novel. I’ve lined my loft with mine. I’m sorry to say you look like a lifer to me. You have a comic pallor. You’re here for the long stretch. Come to terms with your sentence. It’s always best.’

‘But we’re writers,’ Greg insisted. ‘We’ve got to keep trying.’

Dave sucked on a liquorice pipe, trying to extract imaginary smoke from the pink ‘embers’ in the bowl. ‘But what is a writer, Greg …?’ He nodded at their Imperial typewriters. ‘It’s a typist without prospects. Face it, we’re failures. In fact, we are over-qualified as failures.’

‘Don’t you ever have dreams, Dave?’

‘Wet dreams, once. But not anymore. I’m getting old.’ Dave smiled. ‘From now on, Greg, it’s a nice long slide towards the grave.’ He reflected on this for a moment and then added: ‘Actually, I’ll get to the cemetery twenty years ahead of our readers. They’ll have to endure two more decades of this shite.’

‘I know what you mean …’ agreed Greg. ‘I never tell anyone I work in comics. I always say I’m in publishing.’

‘I share your sense of shame. A chimpanzee would be ashamed of this job. At least they can organise a tea party. Our readers drink out of the tea pot.’
(From Read Em And Weep 1: Serial Killer)

But being a future cop like Dredd, a dictator like Torquemada, or a comic editor like Dave Maudling is still only a surface layer of character. It’s just a job description. Their true character is only revealed under pressure. Then the mask drops and we see who that person really is.

With Dredd in the Cursed Earth saga his mask does drop and we see his true personality. There are glimpses of genuine humanity underneath his robotic, emotionless exterior and I’m sure that’s why that particular saga was such a runaway success. There’s his protective attitude towards the alien Tweak; his disgust at the crimes committed against aliens, and his fury at the town of Repentance, which he orders to be razed to the ground. That rage is pure Brother James.

With Dave, he is later shocked out of his complacency: his mask drops and he ends up protecting kids. That forms the basis of his emotional journey.

The key is to know your characters really well and what you want to do with them. A checklist is invaluable. I’m currently at an early stage of writing a novel about an assassin/vigilante. Here’s my checklist, based on the material I’ve currently written for his character development:

Once you know your characters well, you’ll know how they interact and how your story can go forward. If all this sounds a little daunting, time-consuming and overly-methodical, and you’re not wired that way, don’t be disheartened. There are alternative ways of creating characters.

Free association, for example, AKA ‘staring into space’. It’s working with the subconscious and the muse. So, when I created Ro-Busters, the group of second-hand robots who formed the legendary disaster squad in Starlord and 2000AD, I went about it entirely differently.

Suitably cut off from the outside world and its distractions, I simply stared into space. For a while – a long while – no ideas came. Then slowly, very slowly, they began to emerge. Speeding up, I covered some twenty or more pages with completely random lines of robot dialogue and ideas: whatever came into my head. I just typed it. Then I circled the lines with different colour pens, looking for connections between them. Gradually, four robots stood out above all the others: a working class robot; a war robot; a giant bulldozer robot, and a robot boss. Ro-Jaws, Hammerstein, Mek-Quake and Howard Quartz. Their dialogue defined them so well, I knew who they were instantly without having to create complex back-stories for them. They had come straight out of my subconscious. 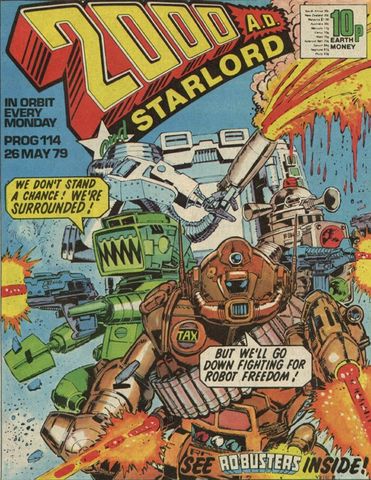 Similarly, when I created Rico, Judge Dredd’s evil clone twin, I literally dreamed him up. Without a single idea or preconception in my head, I just sat staring into space and the story shaped itself in my mind, ready-formed and in astonishing detail. It told me how Rico had been imprisoned on Titan and was now returning to Mega-City bent on revenge: killing his brother Judge Dredd. I scribbled it all down in a trance. The character was so successful it became the basis of the first Dredd movie.

But it’s not an easy process ‘dreaming up characters’. It’s emotionally intense, and it doesn’t always work out so simply. When it does, because it’s come from some uncharted part of the mind or soul, which has its own mysterious agenda, it rightly becomes very personal and important to me. I call it my muse – more about her in a future post. Hence why I’m still precious about Rico to this day and object to another writer helping himself to my character for three text novels, without a by-your-leave. All the excuses and all the spin in the world from those concerned cannot make that right.

For writers who have dreamed up or otherwise created their own characters, my congratulations. The character’s emotional journey is vital to the construction of the story and I’ll go into that in more detail next week.

If there’s any other storytelling subjects you’d like to know more about, do say and I’ll try and make them the subject of a future post.