Finally! Volume One of the English language edition of my Claudia Vampire Knight series is out now on digital for just £2.49/$2.99. Previously, it had only been available in French, apart from appearing in Heavy Metal magazine. Sorry it’s not available in print yet, but we hope if this goes well we can do a paper edition at some time in the future. Meanwhile, the guided view particularly suits this art.

It’s a 6 volume series; covers are by Olivier Ledroit, the Requiem Vampire Knight artist, and interiors are by Franck Tacito, famed in France for his hilarious 666 series (writer: Froideval). It’s hard for me to be objective, but Lisa tells me Claudia is funnier, darker and more 2000AD in style than Requiem. 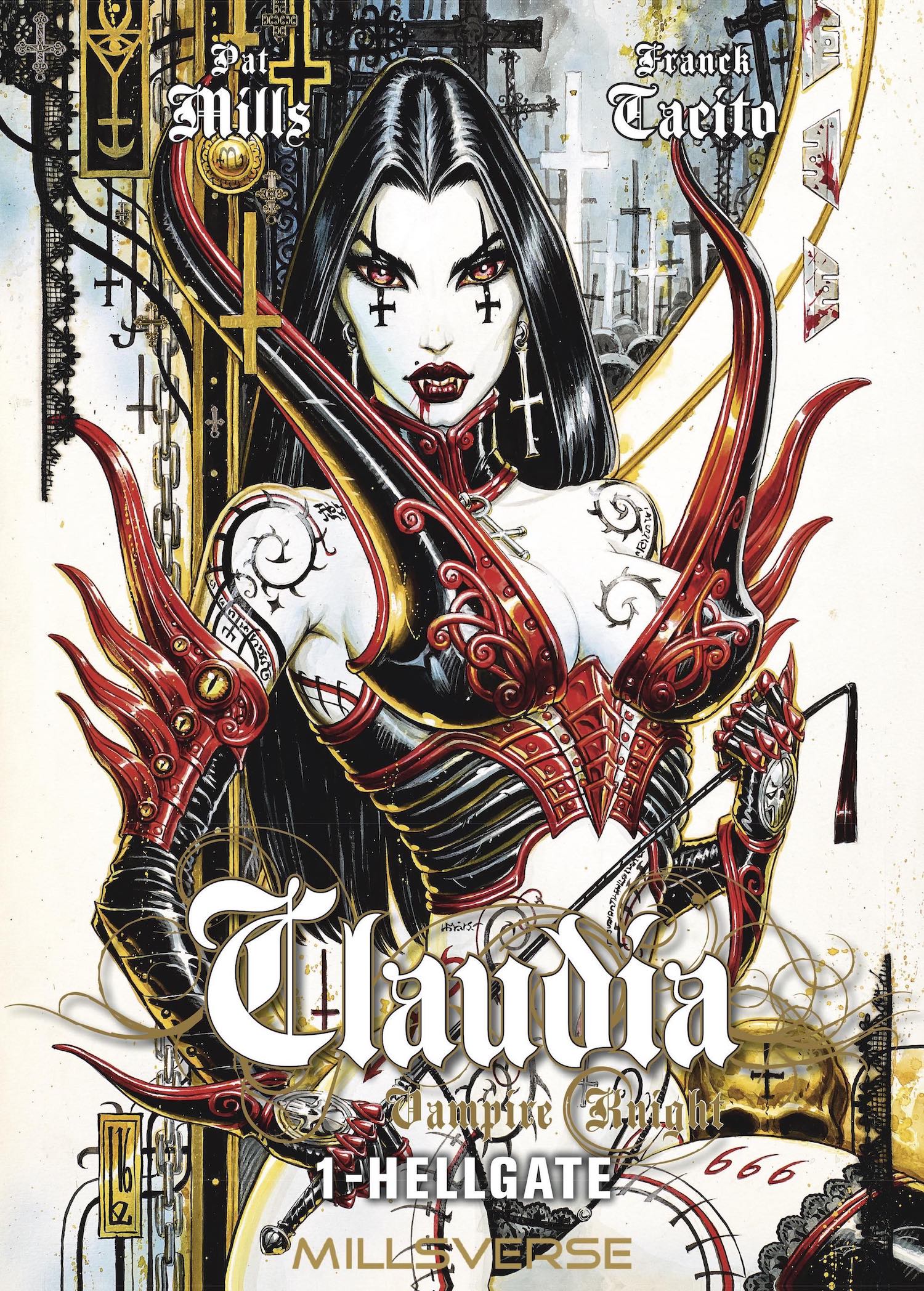 So what’s it all about?

Claudia Vampire Knight is the darkest and most beautiful femme fatale in the nightmare world of Resurrection, previously introduced in Requiem: Vampire Knight.

When one of her blood sacrifices on Earth goes wrong, she descends through a Hellgate into Resurrection, where she is submitted to violent transformations and training in the Dark Arts to become Lady Claudia Demona.

She fights 1950’s small town America Zombies and then encounters the Bitch Pumpers. They are a gang of bizarre and monstrous serial killers, led by Martini Shot. He killed Silver Screen Goddesses when he was alive and now runs Hellywood (the last film shot of the day was known by film directors as ‘the Martini Shot’). 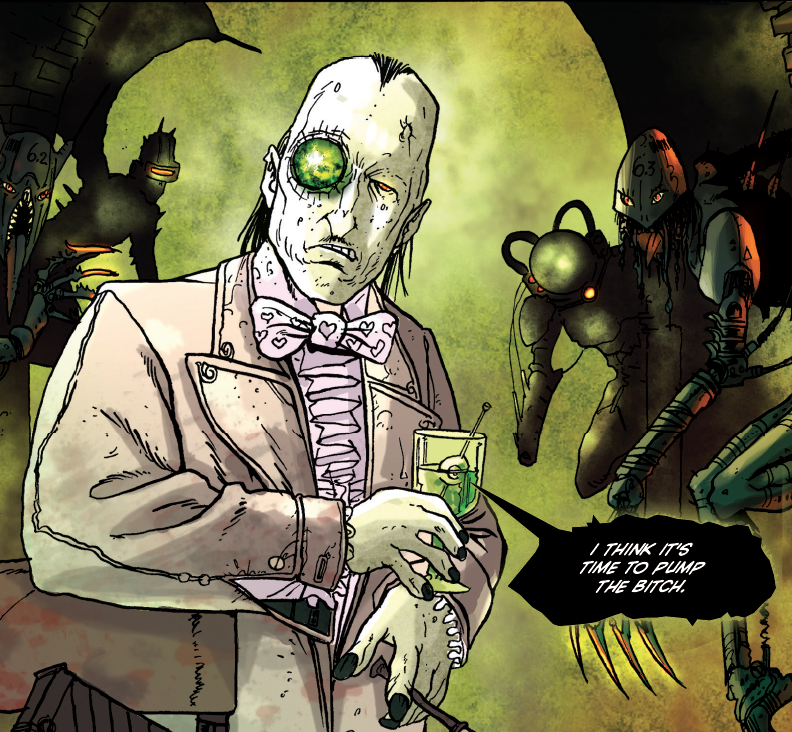 Claudia must deal with these threats as well as the Vampire Hunter known as the Black Pilgrim, and return to Earth in time to sacrifice her innocent daughter on her 21st Birthday or face Eternal Damnation.

In between, she still finds time to visit Herods, the top Vampires department store, and order herself a luxury coffin as well as choose designer victims to satisfy her lust for blood.

The Earth scenes always begin in Gippeswick, which is the medieval name for Ipswich, my home town in East Anglia. Ipswich has a creepy reputation: it inspired its American namesake in Massachusetts – where the last great witch trial took place – and Eastwick in the movie Witches of Eastwick. It also had occult connections with Salem. And now it has inspired Claudia. Maybe that’s why she has always stood out as a villain in the Requiem series.

Back in the day, we had an annual Requiem event, and the cosplay winner had an entire comic page of Claudia, tattooed on her back! 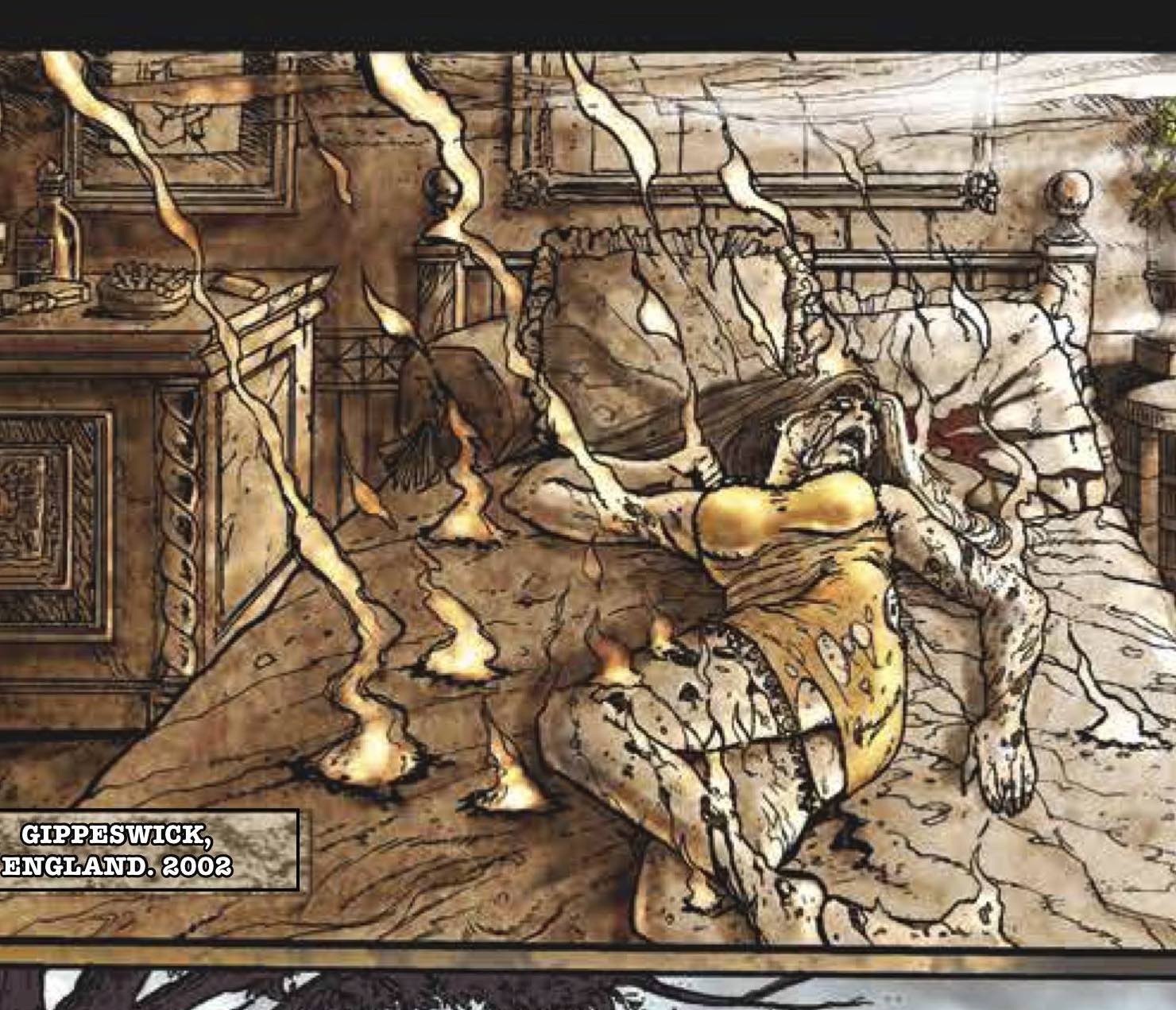 Claudia’s not like Vampirella or Red Sonja: she’s a uniquely dangerous, evil and seductive villain. You will not find anyone else like her in Fantasy.

Here’s two of my favourite images from Vol 1: 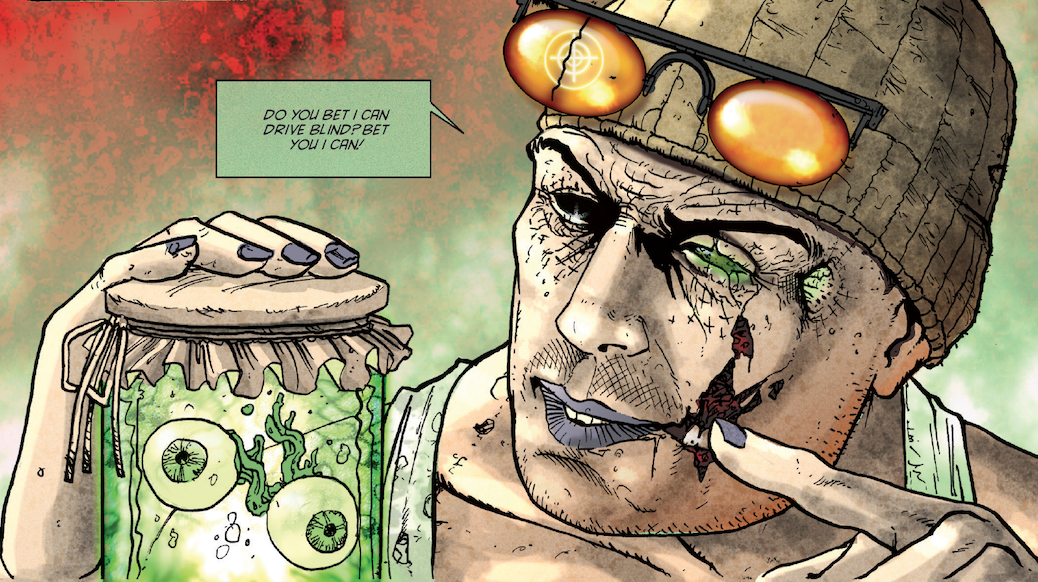 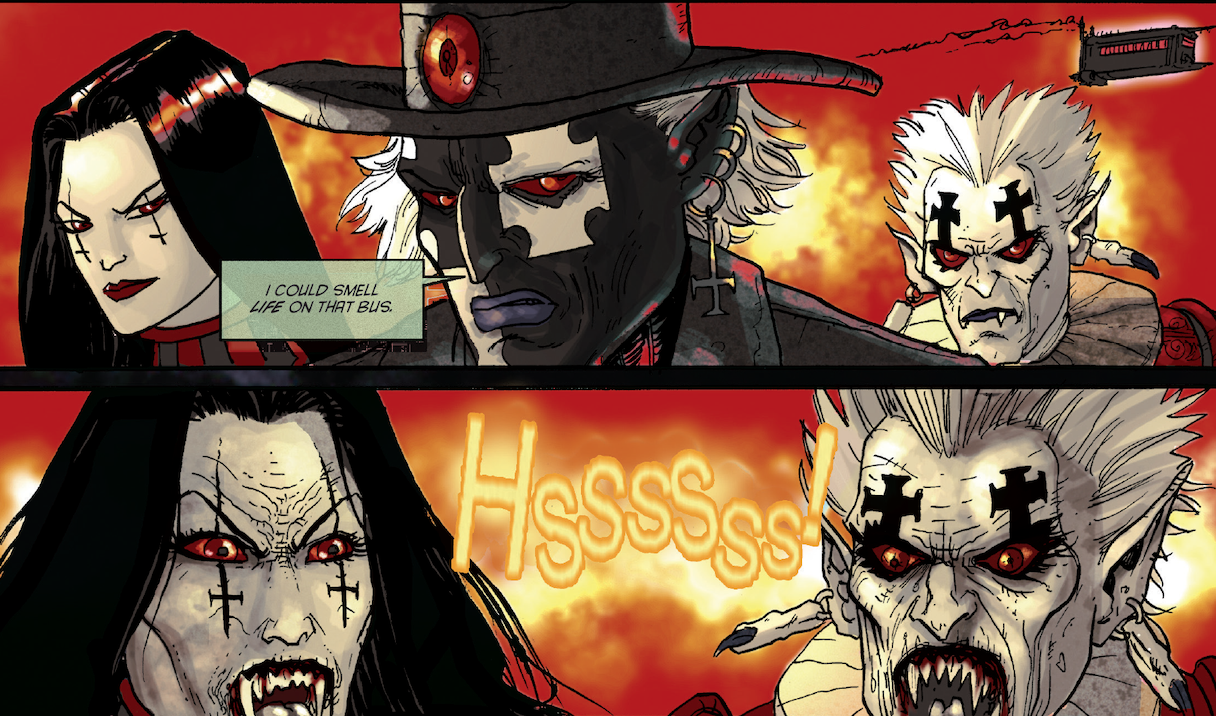 The sexually-repressed Black Pilgrim is one of my favorite villains in this Claudia series. His mantra ‘Dirty Thoughts! Dirty Thoughts! Oh, Lord – save me from the Dirty Thoughts!’ still makes me chuckle, despite being written 20 years ago! Yes, that’s when I began Volume One, and Volume Six is only just going to the artist this year. 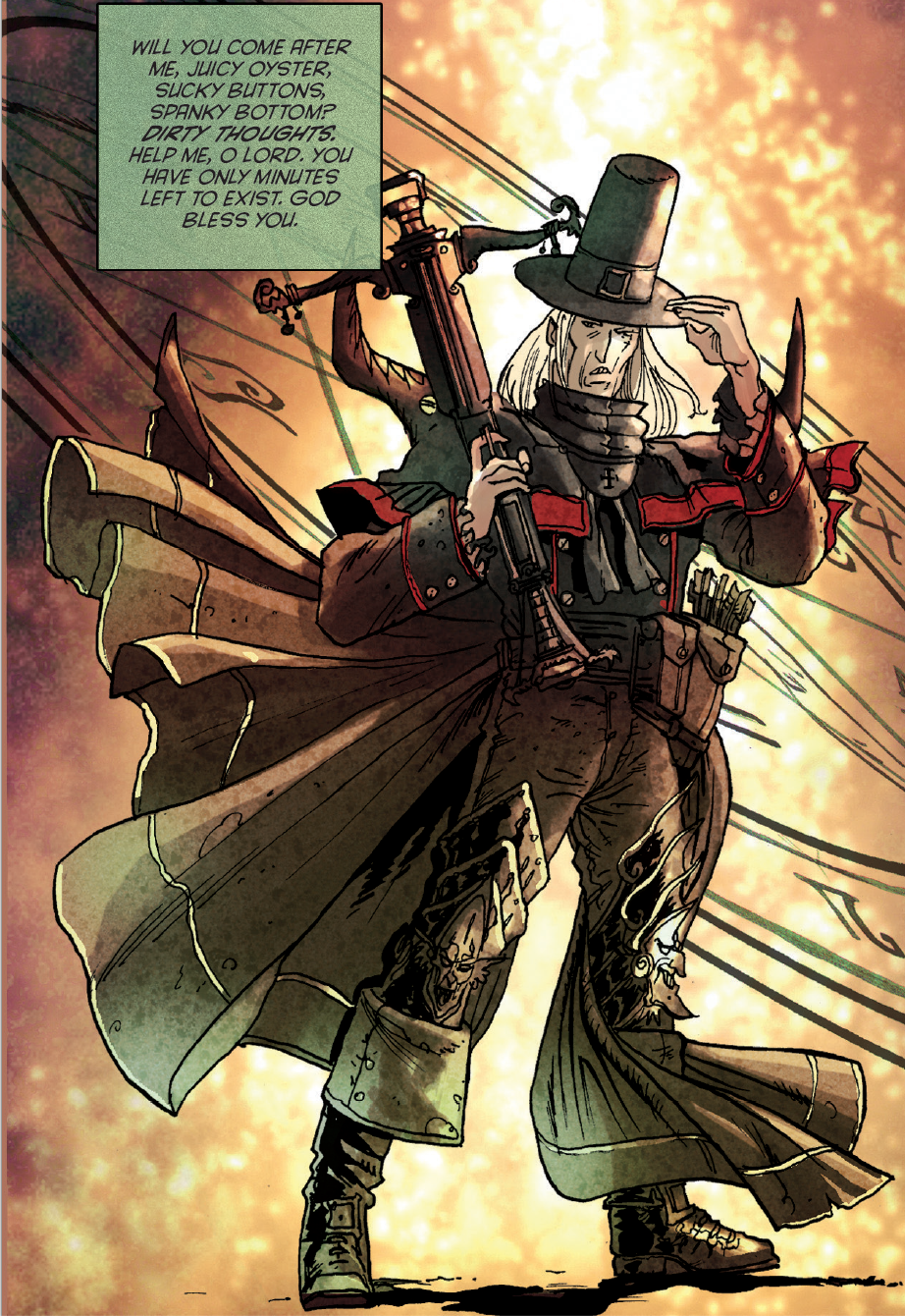 But I promise you it’s been worth the wait.

P.S. Lettering is by Ken Reynolds who has done a superb job, making the book very accessible for an Anglo-American audience.