Spoiler alert: This post contains an excerpt from Goodnight, John-Boy, revealing the secrets of Dave Maudling’s past.

Last week, I wrote about how I develop characters. For example, their motivation, background, speech, physical location. Everything that goes into making them seem like real people. Of course, real people develop over time, and what we find fascinating is watching fictional characters change in reaction to circumstances and conflict. But in comics, characters often don’t make any kind of emotional journey and that is their strength and their weakness. We like the reassuring cosiness of characters who never change, who are the same year after year, and often don’t seem to have any kind of private life. We don’t want them to get religion, make good or bad financial investments, marry, leave their job, or fall out with good friends. All the things we do ourselves in real-life. When they’re well written and drawn, like Judge Dredd, stasis stories work, but if they’re poorly executed, the character becomes boring and will probably be axed. In films and novels, however, an emotional journey is mandatory. The protagonist has to be changed by the events that he has experienced, notably by the ending scene. It’s one reason why comic book characters often don’t work in movies or text novels. For the most part, my characters always seem to have made an emotional journey, so here’s a run-down to show how it works.

Ro-Busters. The robots stop being a disaster squad that rescues humans every week, and escape. Some go to another planet, while Ro-Jaws and Hammerstein become involved in many further adventures, which explore the complexity of their characters. Defoe. He is an ex-Leveller and feels guilty because he is now working for King Charles as a zombie hunter. Zombies are not the true enemy for Defoe. Arguably they are a metaphor for the poor: the Living Dead. He realises he should really be hunting Vizards – rich superior heroes – instead. But he is now married, has two children, and family responsibilities. He daren’t put his family at risk, so he resigns and returns to his old job as a sedan-chair carrier. But his need to kill the Vizards is too great and he eventually succumbs to it. Currently, he is working as a detective for the Crown, while secretly killing the Vizards.
Savage. He hates the Volgans but in his latest adventure ends up becoming emotionally involved with a Volgan secret policewoman. At the same time, he realises the enemy he has fought all his life is not the real enemy: the Allies and Volgans have secretly colluded to create an eternal war to control their populations. So in a future adventure he will need to find a new sense of purpose and direction. ABC Warriors. From a series of bitter conflicts with each other, exploring their characters and weaknesses, they finally unite to face their greatest enemy who is also their creator: Howard Quartz. Marshal Law. In the Savage Dragon story Marshal Law still kills super heroes, but there is an upbeat ending where he realises that a lot of his hatred for heroes is actually self-hatred. He has finally found a hero – himself. This was breaking the stasis that fans often prefer their heroes to remain in. Accordingly, some years ago, at a Spanish convention, a Spanish fan came up to me and said, ‘I love Marshal Law, but you are a bastard for that ending.’ And then ran off. 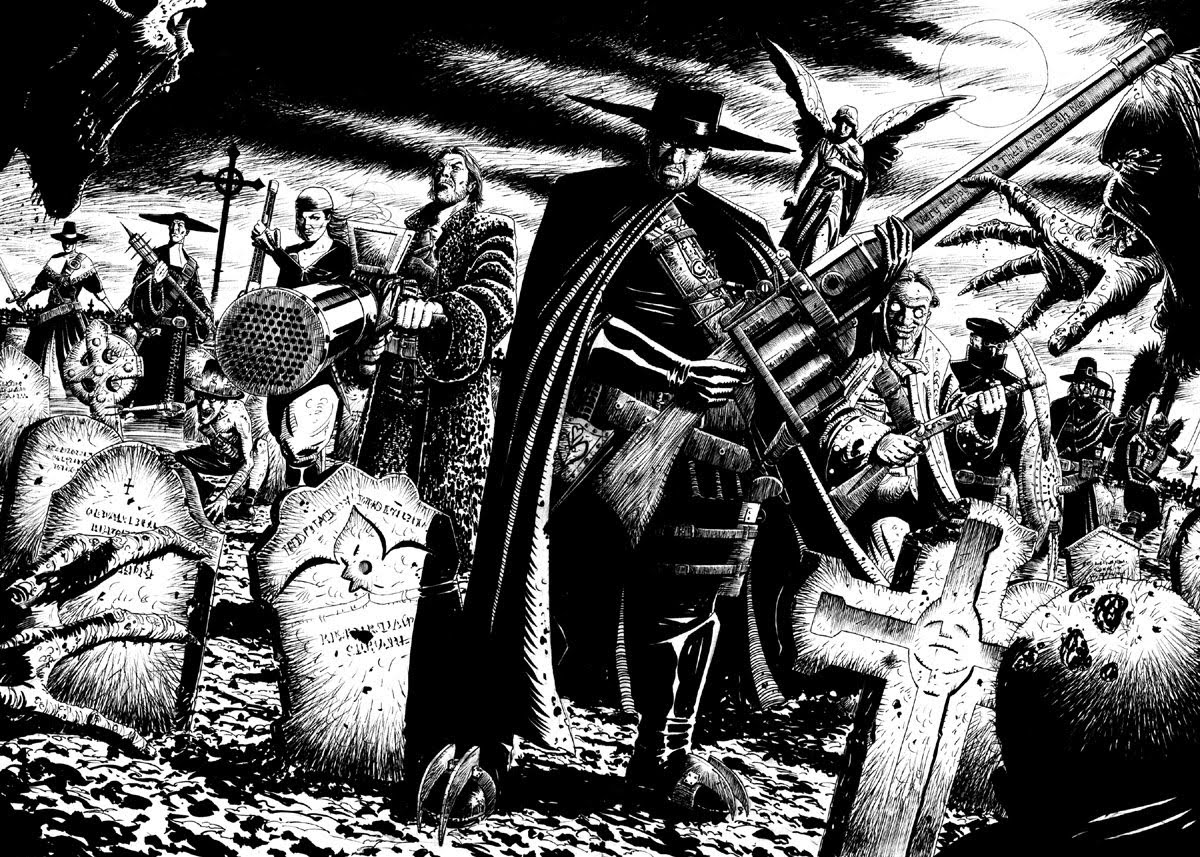 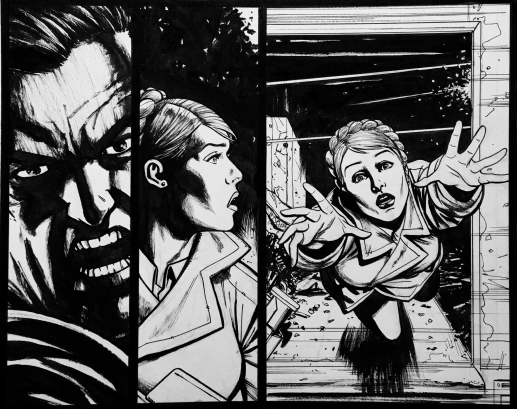 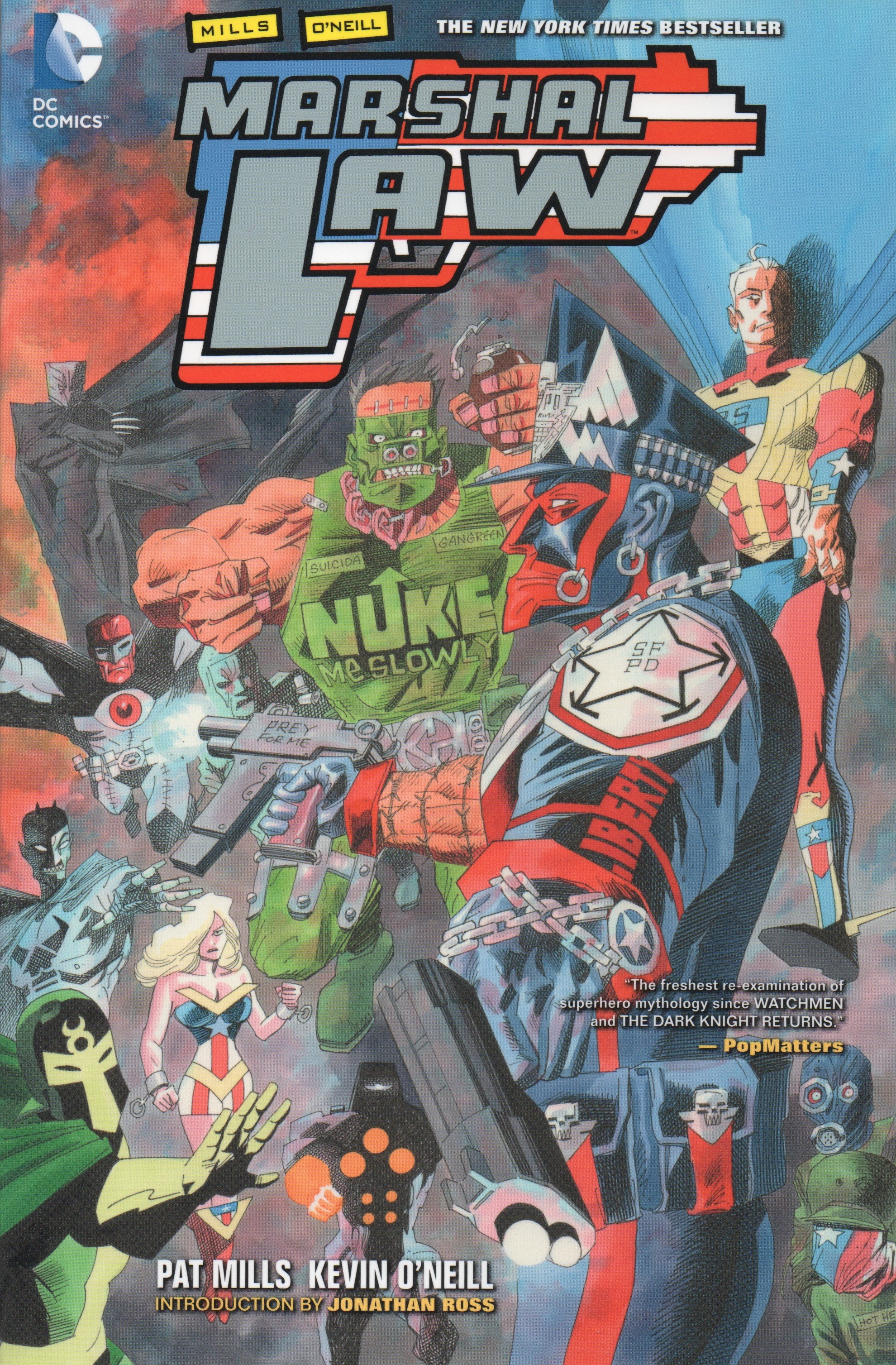 Marshal Law COPYRIGHT ©  Pat Mills and Kevin O’Neill
In novels, in addition to plot, there has to be emotional development for key characters. A good example is the evil newsagent sub-plot in Read Em And Weep. The series begins with an eight-year-old Dave Maudling going into his local newsagents and asking for a Fourpenny One, his favourite comic. In response, Mr Cooper, the newsagent, punches him in the face: a typical ‘fourpenny one’. Cooper continues to make Dave’s life a misery – punching him in the face every Saturday. Years later, when Dave is an editor at Fleetpit publications, Cooper turns up in his life again as a storeman. Aware that Dave is secretly living in the attic, he blackmails him for money. Dave is so under Cooper’s sinister spell he gives in, until one day he snaps and finally fights back. Then he discovers the newsagent may have been his mother’s murderer, and decides to shoot him. This is where we join the scene:

Spoiler Alert! If you haven’t yet read Goodnight, John-Boy and you don’t want to spoil a key reveal, click here to scroll to safety.

A trembling Cooper saw the new resolve in Dave’s face and his heart sank again.

‘No! You can’t kill me, Davey,’ he pleaded desperately.

‘You? You? You think I’m crazy enough to believe a low-life like you could possibly be my father?’

‘I’m not lying,’ said Cooper, ‘I am your father.’ There was real conviction in his face and in his voice.

…Dave felt sick to his stomach. He was lost for words. Maybe that was why he was drawn into going back to the shop every Saturday, because, on some deep subconscious level, he sensed the newsagent was his real dad.

‘Cheer up, Dave,’ Cooper grinned. ‘It was only a bit of “How’s your Father?” if you’ll pardon the pun. And everyone was rutting like stoats in them days. That’s why there were all you baby boomers.’

Cooper smiled triumphantly at him, aware he had the upper hand once again.

‘I told her to flush you while she had the chance.’ He grinned at his son. ‘I’d flush you now if you weren’t so big.’

Having hit this dramatic high note, events in this sub-plot can only get worse. Not just through physical events, but emotionally. Dave has to change in response to what he has just heard. In girls’ comics it is often easier to create an emotional journey for characters. Indeed, female readers expect it, rather than resist it, as in the Marshal Law example cited earlier.

Thus in my serial Girl in a Bubble, published in Jinty, the heroine lives inside a large plastic bubble because she has no immunity to disease. Any physical contact with the outside world, and she will die. She is looked after by a female scientist who feeds and punishes her through control gloves inset into the side of the bubble. Then a tearaway girl sneaks into the building and finds the girl in the bubble. She tells her she thinks that there is nothing wrong with her. Gaining courage from her new friend, the heroine briefly leaves the bubble and discovers it’s true. The scientist’s treatment has cured her, but she wants her to remain in the bubble so she can continue experimenting on her. The tearaway encourages the heroine to run away and find her mother. But when her mother opens her front door, she rejects her own daughter and slams the door in her face. She had given up on her daughter and adopted another girl to take her place. But now the heroine has grown stronger as a person, and overcomes these latest challenges. Eventually, the mother is united with her daughter, and the scientist is punished. 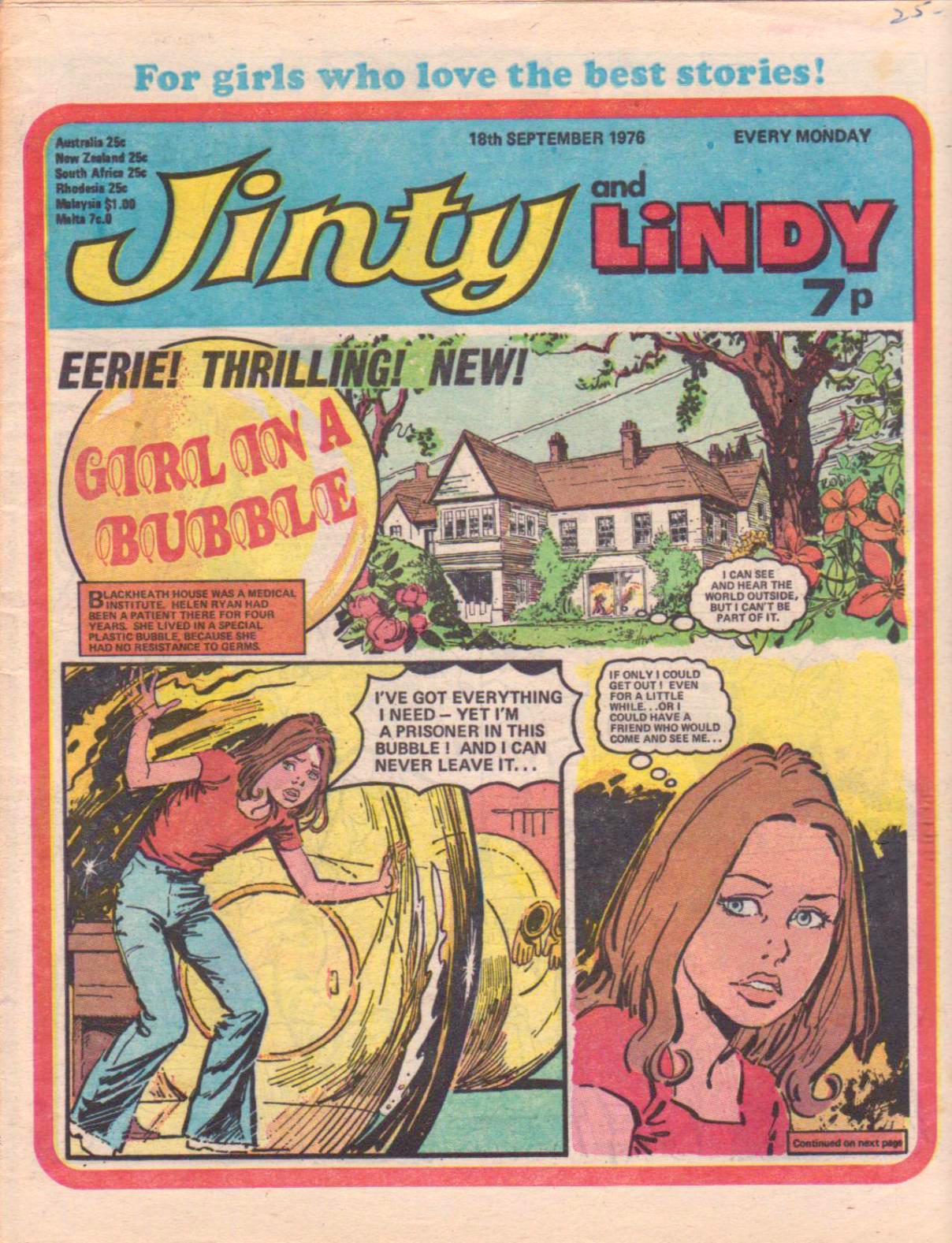 Once again, the situation has to get worse and worse before it is finally resolved. If that serial – and other girls’ comic serials like them – seem totally over the top, then consider the novels of Gillian Flynn. Gone Girl and Sharp Objects are equally wild. In suitably toned down form, they would make for great girls’ comics serials. In the unlikely event that girls’ comics ever return to the newsstands and I was invited to write for them again, I would study the works of Gillian Flynn and similar authors for contemporary inspiration. Note that in Girl in a Bubble, the situation was in stasis, until the inciting incident when the tearaway girl discovered her. Then her life would never be the same again. More about inciting incidents next week.