THAT DIDN’T MAKE THE FINAL CUT

From time to time I want to show some of the fantastic art that’s been submitted for Space Warp that hasn’t been possible to include in the comic. It’s no reflection on the artists’ talents – it’s just sometimes their style didn’t quite fit, or there was a stronger alternative, or there just wasn’t enough time to develop their work.

The first one to kick off the series is undoubtedly:

Here are some of my favourite images of Dave’s work. I love that stylised, very clear, almost Japanese look to his work. There’s also a touch of Brett Ewins and pop-art about it.

I always felt I didn’t quite know how to develop it further and that with more insightful direction on my part, Dave’s work would have really blossomed. That’s why if another suitable job on Space Warp comes along, I’m definitely going to see if he’s up for it.

Not least because Dave has been remarkably resilient, bouncing back from my long essays on his work and what I felt was missing, always patient and always surprising me with new and interesting revisions. He’s a true professional. Many another artist would have fallen at the second or third or fourth fence – but not Dave. That’s also an important quality in an artist and – believe me – it’s often in short supply.

But not on artists who are either working for Space Warp or have come close. Because to get the quality needed, the art and my stories, too, have to go through considerable revisions and tweaks.

But it’s worth it: to produce a mainstream comic of excellence where creators finally own the rights to their own talent and are rewarded with a fair royalty share– a process that is long, long overdue.

That’s why Space Warp is so important. You’ll see the exciting results in the coming months as we now have five out of the six artists needed.

You can see more of Dave’s art here: 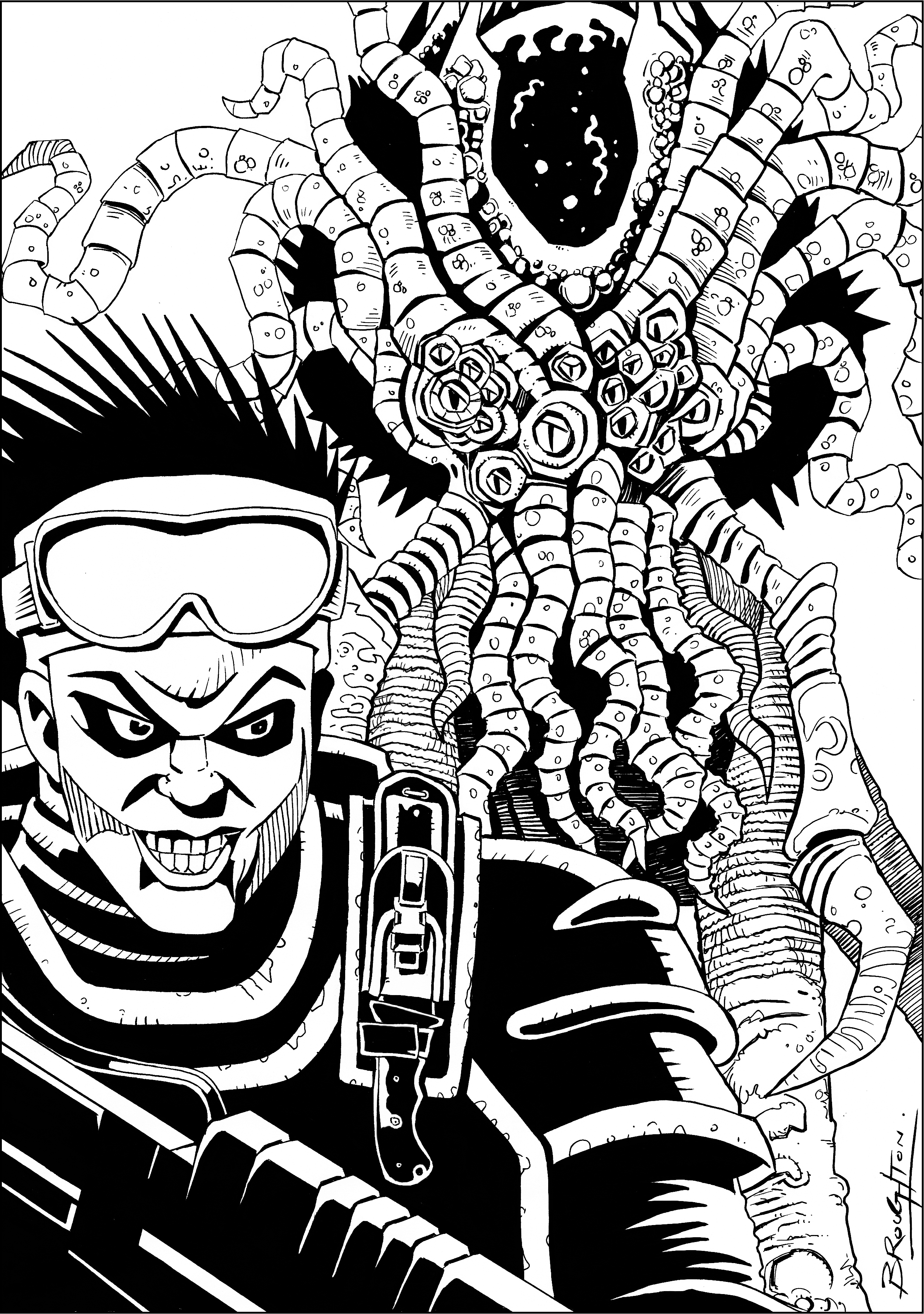 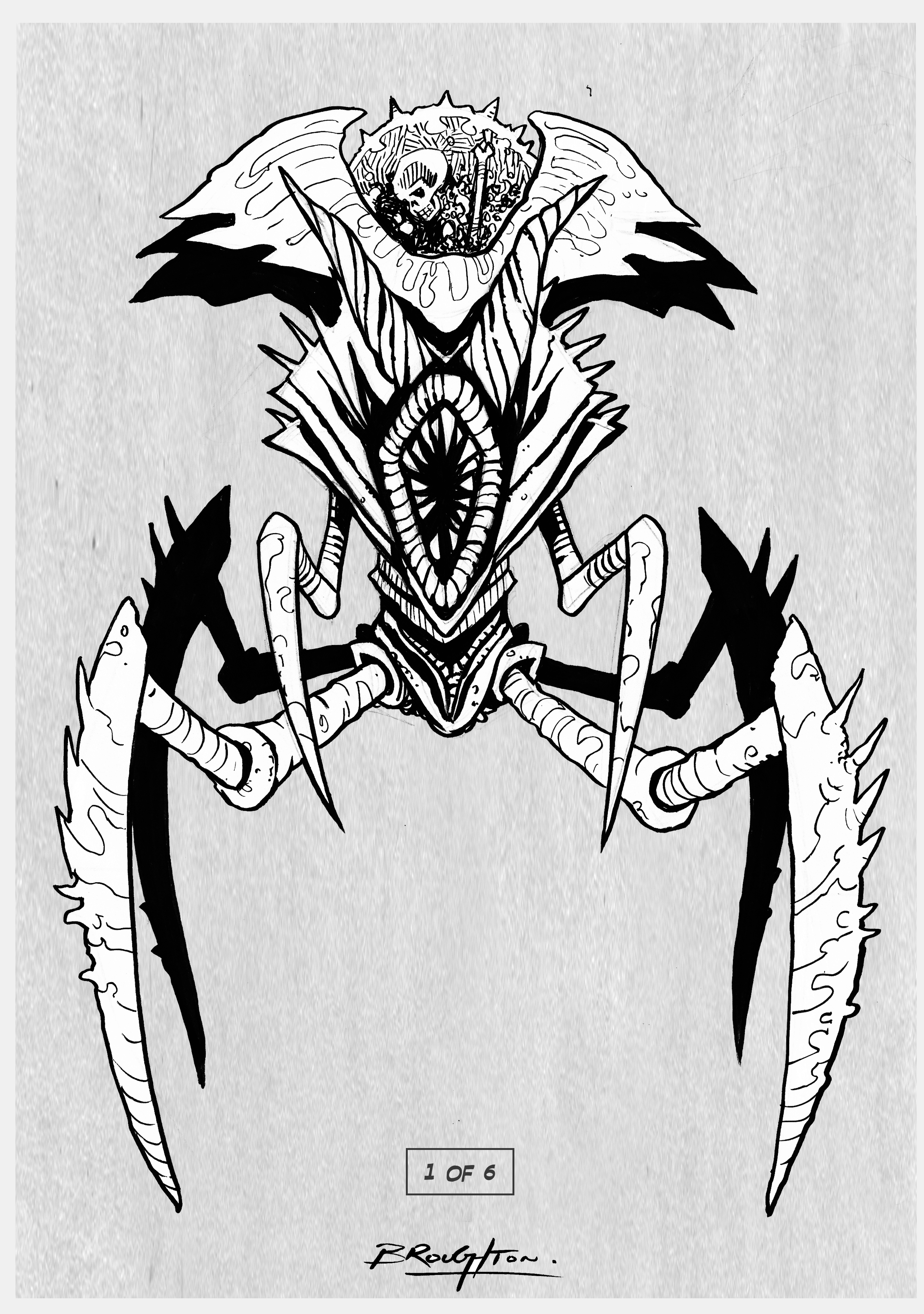 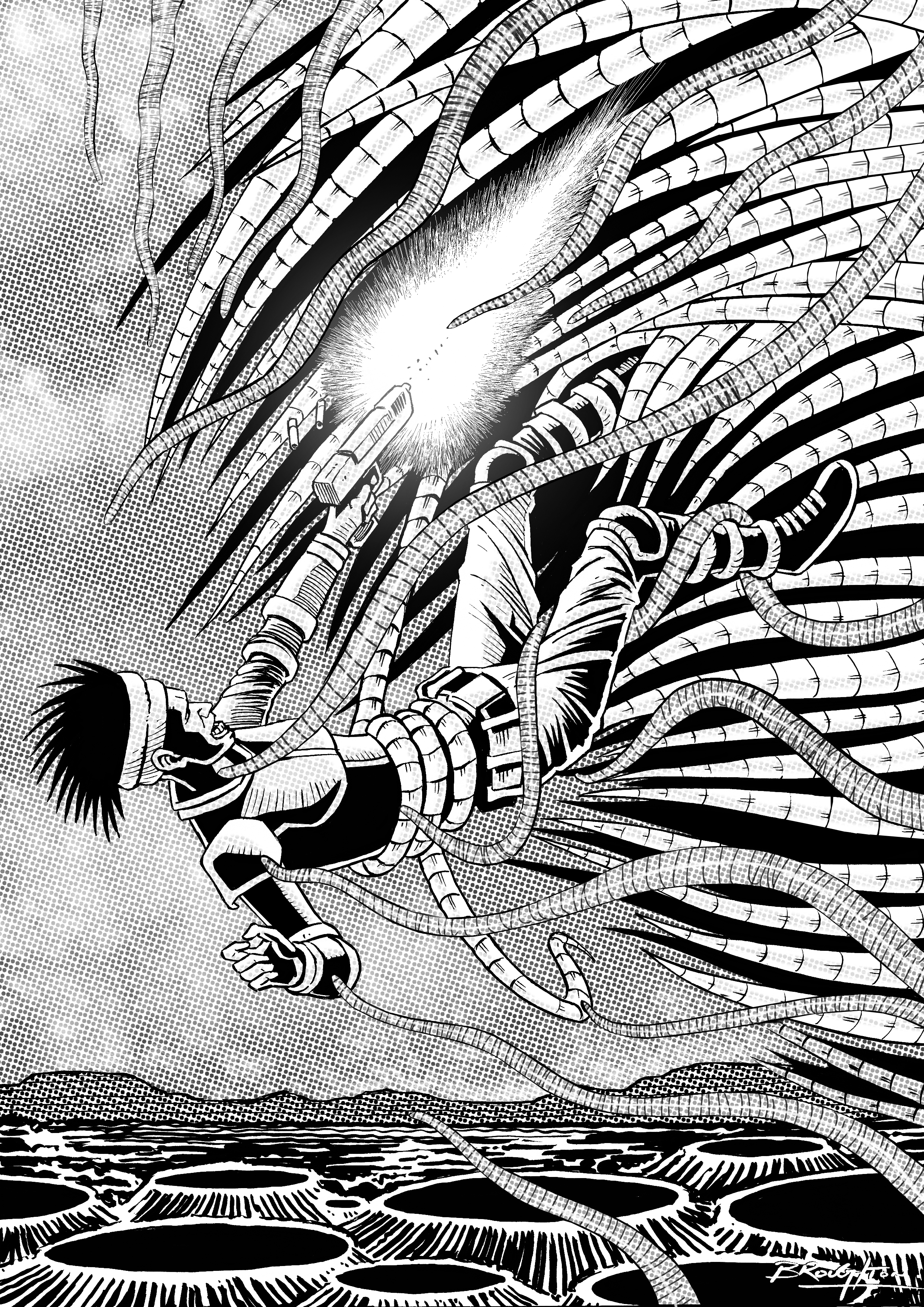 The second example of great art that didn’t make the final cut is:

It was surprising how many artists had problems bringing out the menace of the Bacteria Eater, particularly as I’d supplied several references which showed their scary potential.

I see the Bacteria Eaters as having something in common with Martian Tripods, Mars Attacks monsters and the Daleks. Not to mention spiders, robots and octopuses.

Jim’s captured their menace perfectly in this scene.

SF1 is set on an Earth where, thanks to the Space Warp, microbes have become macrobes – a kind of nightmare version of Fantastic Voyage, only we haven’t shrunk: the bugs have grown!

Under a ruling of the Galactic Supreme Court, because humans are predominantly composed of bacteria (it’s true), we are therefore a legitimate and legal target for the Bacteria Eaters. They are based on the microscopic bacteriophages that look really scary under the microscope.

Still thinking about their name. Bacteria Eaters is a bit long and obvious, Bacteriophages doesn’t sound right to me and Macrobes is the general name for all the bugs.

Inspiration will come to me – I hope!

So thank you, Jim, for bringing the monsters to life! It’s definitely got the savagery needed. Jim is using SF1 as sample pieces for his Fine Art course. I’m sure, later down the line, we’ll see much more of his work.

Good luck with your course, Jim. 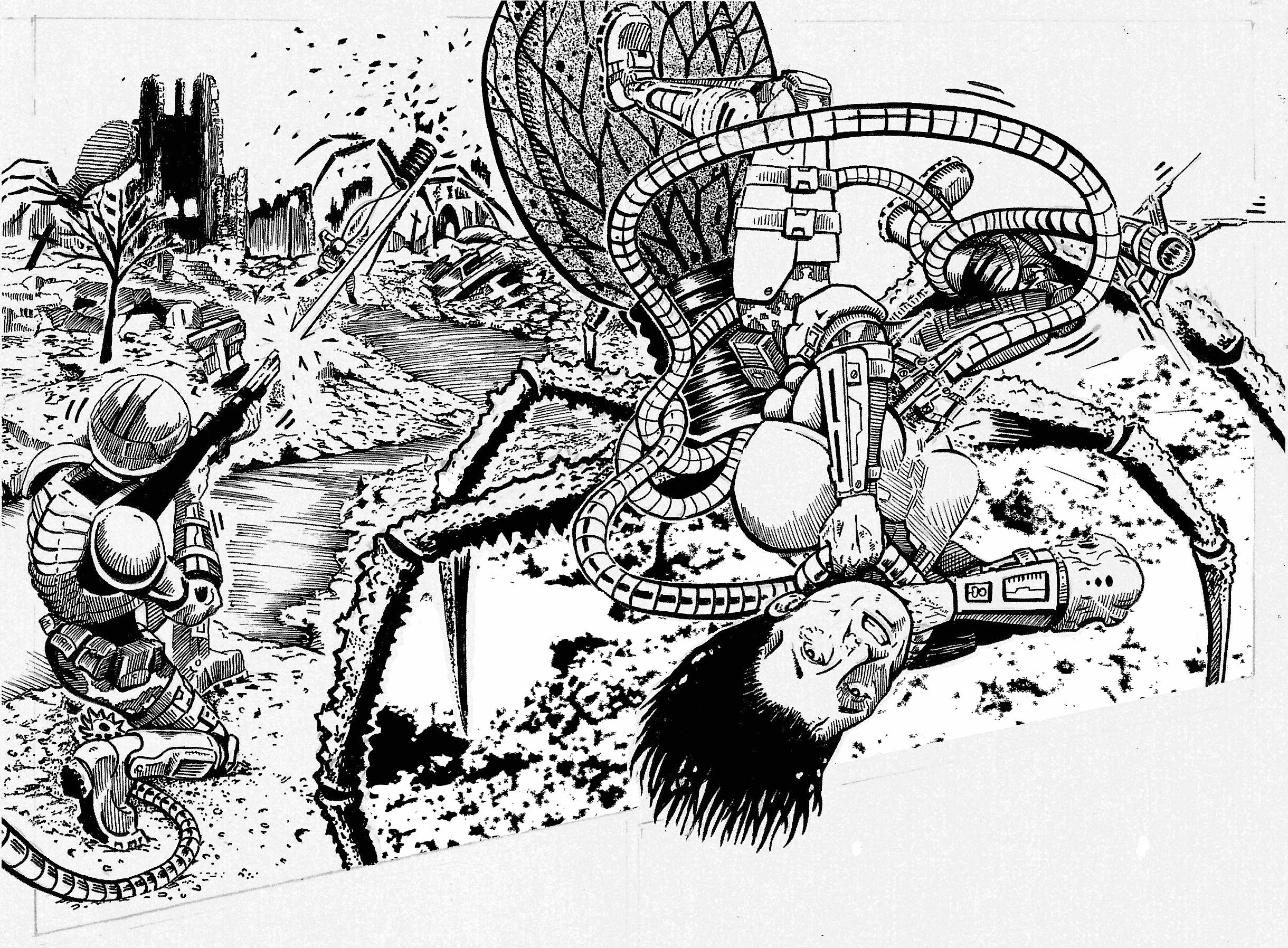 The third example is:

Simon designed Dis, Capital of Hell, within hours of the story appearing on this site.

(Not to be confused with Diss in Norfolk, btw)

In this example, I absolutely love his interpretation. No reservations. I find it really chilling, although I have absolutely no idea why. It’s not so much the tortured souls: maybe it’s the strange and alien shape of the buildings? It definitely strikes a nerve.

Here’s what Simon had to say about his page:

I’d read HellBreaker, and got this stuck in my head. Just the first page that came to me, when you described the main character. So, I wanted to draw on things like Dark City, Metropolis, and Event horizon to work all the elements of this almost corporate version of a sci-fi Hell Into it. Huge floating megaliths imprison the Infernals. Even within the walls themselves, the filth and depravity of the lives they led, so thick it becomes a solid foundation for their own tormenting cages.

However, we have Ian’s equally amazing but totally different interpretation of Hellbreaker.

Simon created the excellent Space Warp symbol. Plus he has many more creative ideas yet to appear in the comic.

Lots of chopping and changing is possible when a mainstream comic is creator-owned. But if you sell all rights, how many artists can afford to say, ‘I want to revise what I’ve already done and take a week or two doing a new version. For no money.’

It happens very rarely. Artists and writers simply can’t afford to go through self-imposed revisions when we sell all rights to our work and only receive a ludicrously small royalty for our efforts – if we’re lucky.

Surprisingly, though, it happened recently on Sláine – with the brilliant Leo Manco who upended and revised his work several times which will be greatly to the benefit of 2000AD when it appears maybe the end of this year, and, of course, Rebellion. His Sláine work was already 8/10 the first time. Now it’s 12/10. Believe me, his changes took him WEEKS! Seriously! And he made them for FREE!

I guess he did other work elsewhere to subsidise his Slaine work. That’s why it’s taking him so long. It’s something artists and writers sometimes do if they love a story that much and Leo clearly loves Slaine. 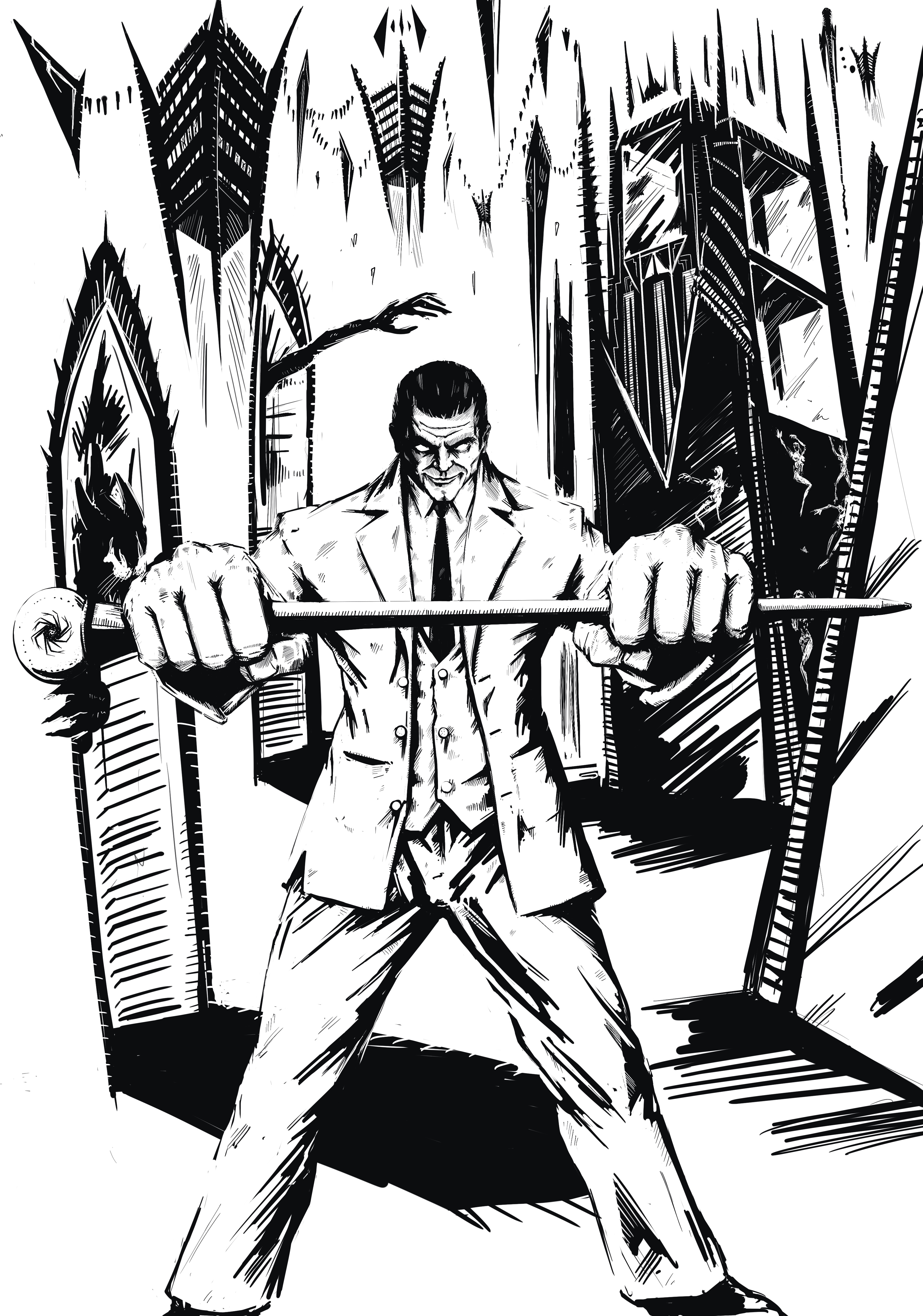 I particularly liked his alien robot SLAYER aka SCHLOCK.  It has a sinister and mysterious quality that I found very compelling.

It’s tough to get the right look for an alien machine, but I think Alan really cracked it.

More examples of Great Spacewarp Art soon.  Plus the real thing as we’ve almost got all our artists for the project! 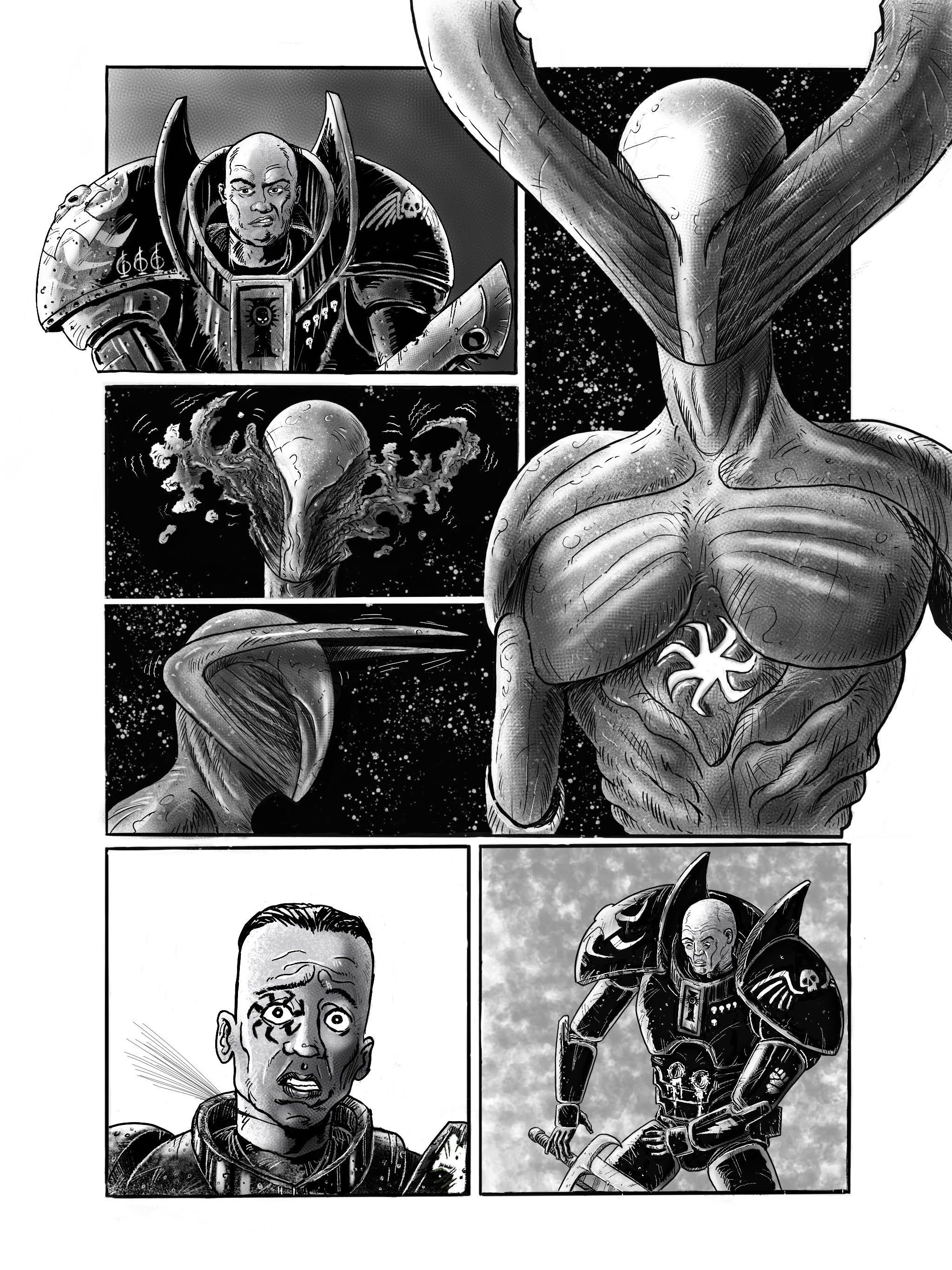 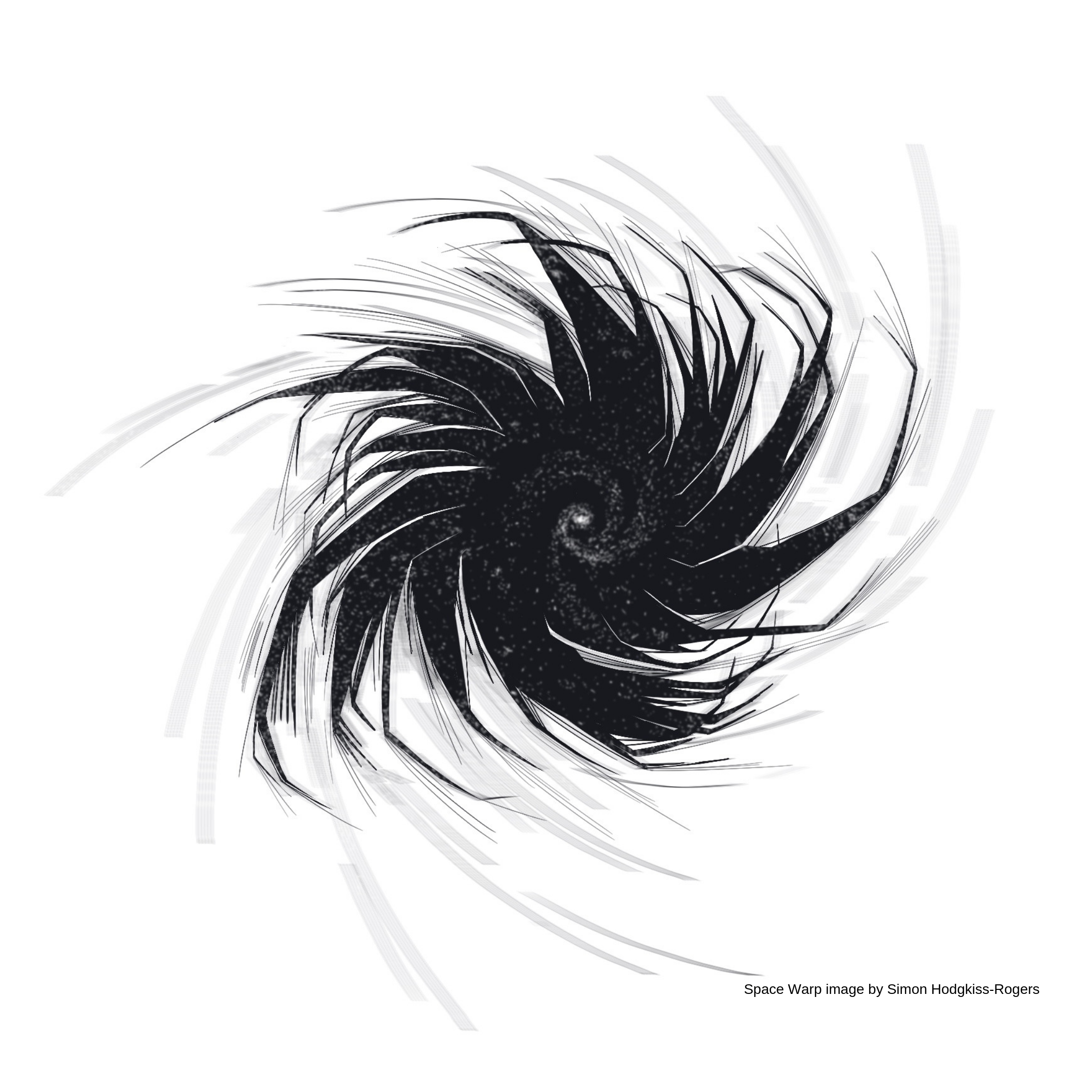