GREAT WAR DUNDEE – THE WAR IN COMICS AND POPULAR CULTURE

I’m really looking forward to being in Dundee on Friday and participating in this great comic launch. Below is the official press release, with a detailed schedule.  Hope to see you there! — Pat Mills

A comic telling the story of the immense impact the Great War and its aftermath had on Dundee is to be launched at an event in V&A Dundee on Friday 20th September 2019. The publication, produced by the Scottish Centre of Comic Studies, will draw on the resources and knowledge that the Great War Dundee Partnership (GWD) has introduced to the public domain over the last few years.

The main story is written by legendary comics creator Pat Mills, who worked at DC Thomson before creating the hugely successful British science fiction comic 2000AD. In the 1970s, Pat Mills started work on one of the most acclaimed war comics of all time, Charley’s War. This poignant and realistic tale tells the story of Charley, an ordinary soldier in the trenches during the First World War. For the GWD comic, Pat has written a story about a Black Watch soldier returning to Dundee in the aftermath of the War, and his attempts to adjust to civilian life. The artist is Gary Welsh, one of the University of Dundee’s recent graduates. The story is inked, lettered and produced by Phillip Vaughan, edited by Chris Murray, and is published through the University of Dundee’s comics imprint, UniVerse.

The other strips included in the comic are ‘The Women’s Toon’, written by Erin Keepers and Hailey Austin, with art by 2000AD artist Anna Morozova, and ‘Casualties of War’, written by Calum Laird and drawn by Elliot Balson. All these creators are graduates of the comics programme in Dundee. Legendary comics artist, and veteran of the war comics genre, Ian Kennedy, provides the cover artwork.

The comic will be launched at a free event titled Great War Dundee – The War in Comics and Popular Culture which will take place on Friday 20th September 2019 at V&A Dundee. The event pulls together many of the threads of the GWD projects that have taken place since 2014. The event will cover topics such as the presentation of the Great War in comics and games, and attendees will get an opportunity to learn about the process of creating comics and to develop their own comic strips.

The event is free and tickets can be booked via Eventbrite. It starts at 10am, with talks about the war in comics and games followed by a comics workshop. The afternoon session will include talks by the comics creators, and a special appearance by Pat Mills and Ian Kennedy, and several others, and the launch of the comic. Later in the evening, from 18:30 to 20:00 in the Dundee Creative Comics Space in The Vision Building, there will be a signing event with Pat Mills. No tickets are required to come along to this.

Billy Kenefick, Chair of GWD commented that “Great War Dundee has played a leading role in commemorating the First World War and its impact on the City of Dundee for the last eight years. With Great War Dundee – The War in Comics and Popular Culture taking place at the V&A Dundee the project draws to a close. But through the website, social media, and ongoing research, education and community outreach projects Great War Dundee will maintain local and national interest in the First World War for many years to come as we continue to tell the story of the people of Dundee and a city at war.”

Professor Christopher Murray, director of the Scottish Centre for Comics Studies, said “We are delighted to be working with Great War Dundee to bring this comic to life. GWD has revealed so much about life in Dundee during the war that was not previously in the pubic consciousness, and we have drawn on some of that for this comic. We are also hugely honoured to be working with Pat Mills and Ian Kennedy, two legends of British comics with deep connections to Dundee who have made such significant contributions the genre of British War comics. Ian has delighted comics readers for decades with his incredible talent, and Pat wrote the best war comic in the world! It has been a particular pleasure to have so many of our current students and graduates work on this comic alongside these legends. Gary Welsh, Erin Keepers, Hailey Austin, Calum Laird, Anna Morozova and Elliot Balson have done incredible work here and we are very proud of their achievements. We look forward to sharing the comic with the public at the launch at V&A Dundee!”

GWD and SCCS: The Great War Dundee Partnership Group have been working together since 2011 to coordinate a Dundee-wide approach to commemorating the First World War. The University of Dundee’s Scottish Centre for Comics Studies runs Dundee Comics Creative Space with co-funding from The Rank Foundation. It supports a comics studio, Ink Pot, and provides workshops for children and teenagers:

About The National Lottery Heritage Fund : Thanks to National Lottery players, we invest money to help people across the UK explore, enjoy and protect the heritage they care about – from the archaeology under our feet to the historic parks and buildings we love, from precious memories and collections to rare wildlife. www.hlf.org.uk.  Follow us on Twitter, Facebook and Instagram and use #HLFsupported. 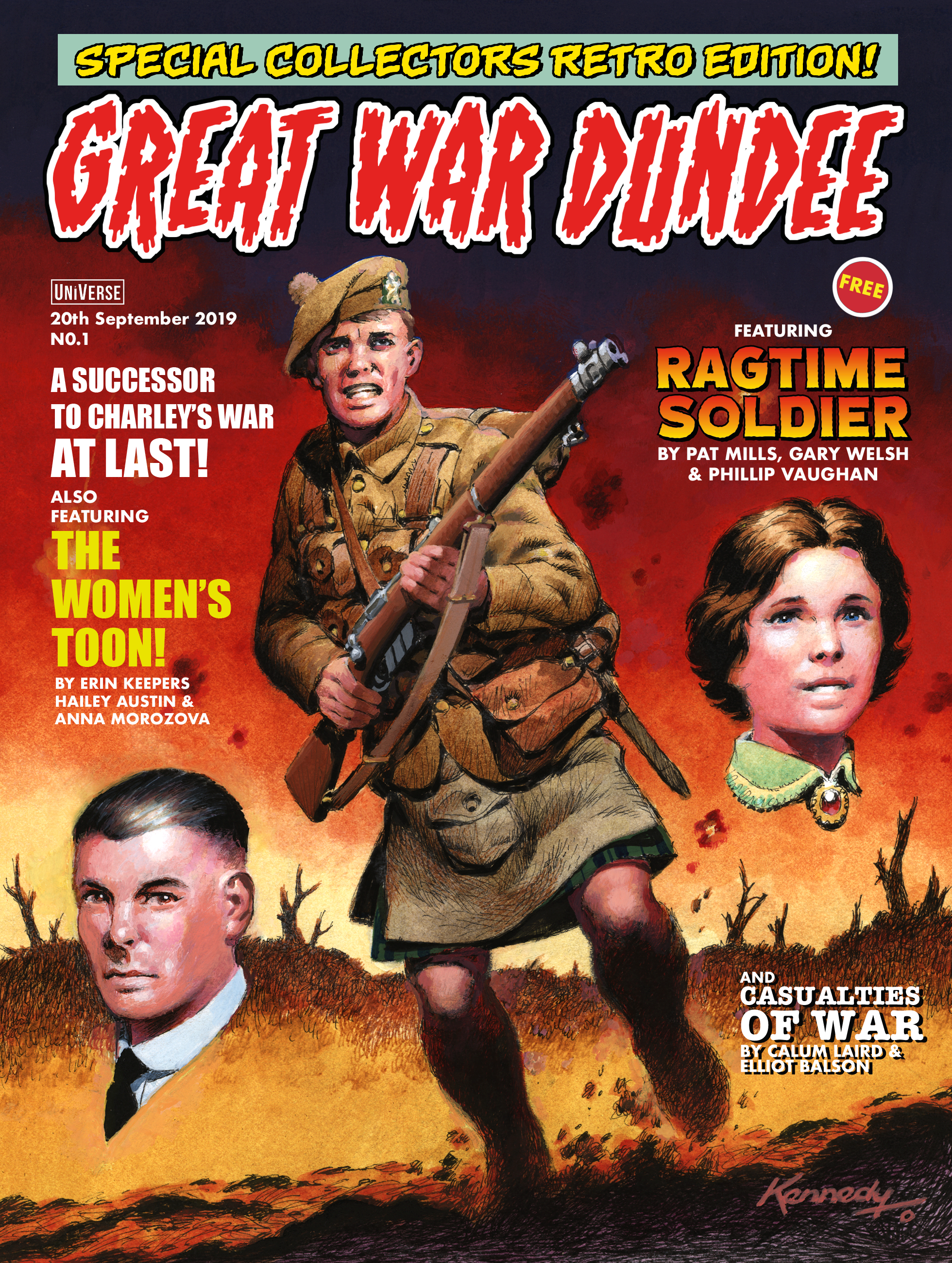