I’m delighted to announce our next Spacewarp project: a new, full length, all-action adventure featuring one of our Spacewarp characters: Hellbreaker.

Hellbreaker: Fire in the Blood stars Anton De La Rue, an assassin escaped from Hell to punish the living, and Detective Inspector McNeil who is determined to send him back to Eternal Damnation.

I’ve finalised the story outline, Ian (Hellbreaker artist creator) designed the key villains, and he’ll shortly be starting work on the strip art. We hope to publish at the end of the year or early in 2023.

Here’s what I told Ian when I saw his promo art for Fire in the Blood:

‘I found the image engrossing, disturbing, mysterious, fresh and original, dangerous, exciting and sexy. It’s taking us all somewhere we haven’t been before!’ 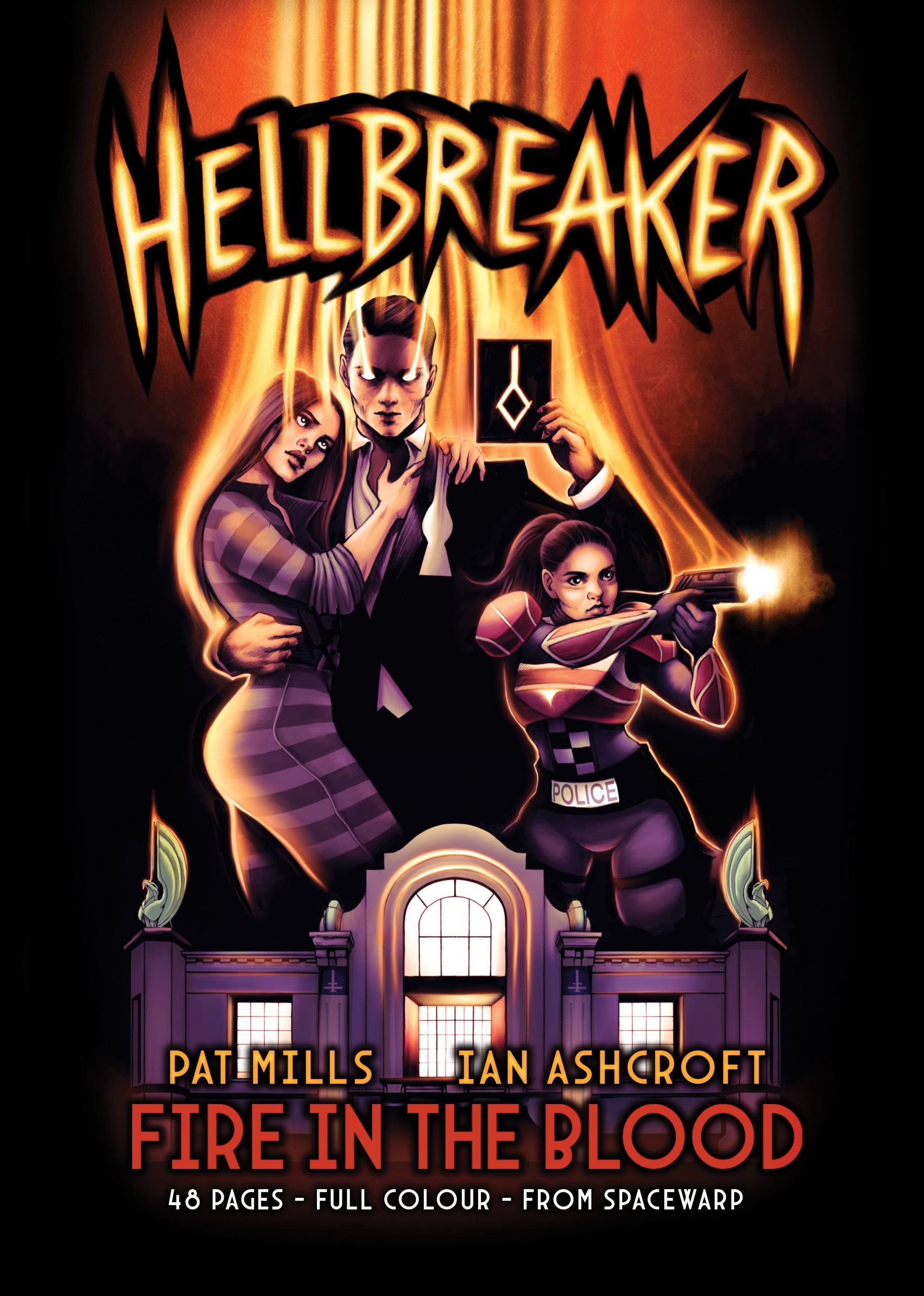 I hope you agree! Sorry it all took so long, but ‘hurry, hurry, hurry’ and ‘cut corners’ is the curse of mainstream British comics. After a lifetime of putting up with ‘fast food comics’ thinking, I wanted to take my time with our Spacewarp stories.

Now we finally have enough Spacewarp sales data on Issue #1 to confirm this was the right strategy and to see the positive road ahead. And to tell you all about it!

Everything also took longer because of Covid, and getting feedback on the Spacewarp Punx edition that sold on the UK and Irish newsstands. But this was really important to me because the newsstand was once the true heart of comics – it’s where it all began. So getting newsstand distribution for an independent comic was a MAJOR achievement, thanks to the efforts of distributors Get My Comics.

Currently, the profits and projected sales on future Spacewarp titles make it viable to continue, but we’re also vulnerable to any sudden, unexpected changes in the market – such as wars and pandemics!

So we’re proceeding cautiously, particularly as prices are suddenly and steeply rising on so many raw materials, as I’m sure you know. And that’s even before the Ukraine conflict. Thus my French publisher of Requiem Vampire Knight tells me that since the war began, paper availability has become problematic. In Spacewarp’s case, printing costs and and shipping could go up, and unexpected delays can scupper schedules.

While the market is still in flux, a safe bet is for us to produce a one-off Spacewarp full-length, complete story: Hellbreaker: Fire in the Blood. It’s quicker to produce, has potentially similar sales, fewer production costs and therefore higher profitability.

I think the clincher for me was when a ten-year-old Spacewarp reader told me he liked Hellbreaker in particular because, ‘He’s like James Bond, but on fire!’

And it’s in colour, which is another big step forward for us!

Why colour? We’d originally planned to do Fire in the Blood in black & white, but Ian sent us a coloured page he’d done of Hellbreaker from Spacewarp #1 and it blew us away! He also showed us how he can create crisp B&W art from his coloured pages, which gives us the potential to publish a B&W edition in future. Of course, coloured artwork takes a lot longer to produce, so it had to be Ian’s decision to go ahead. 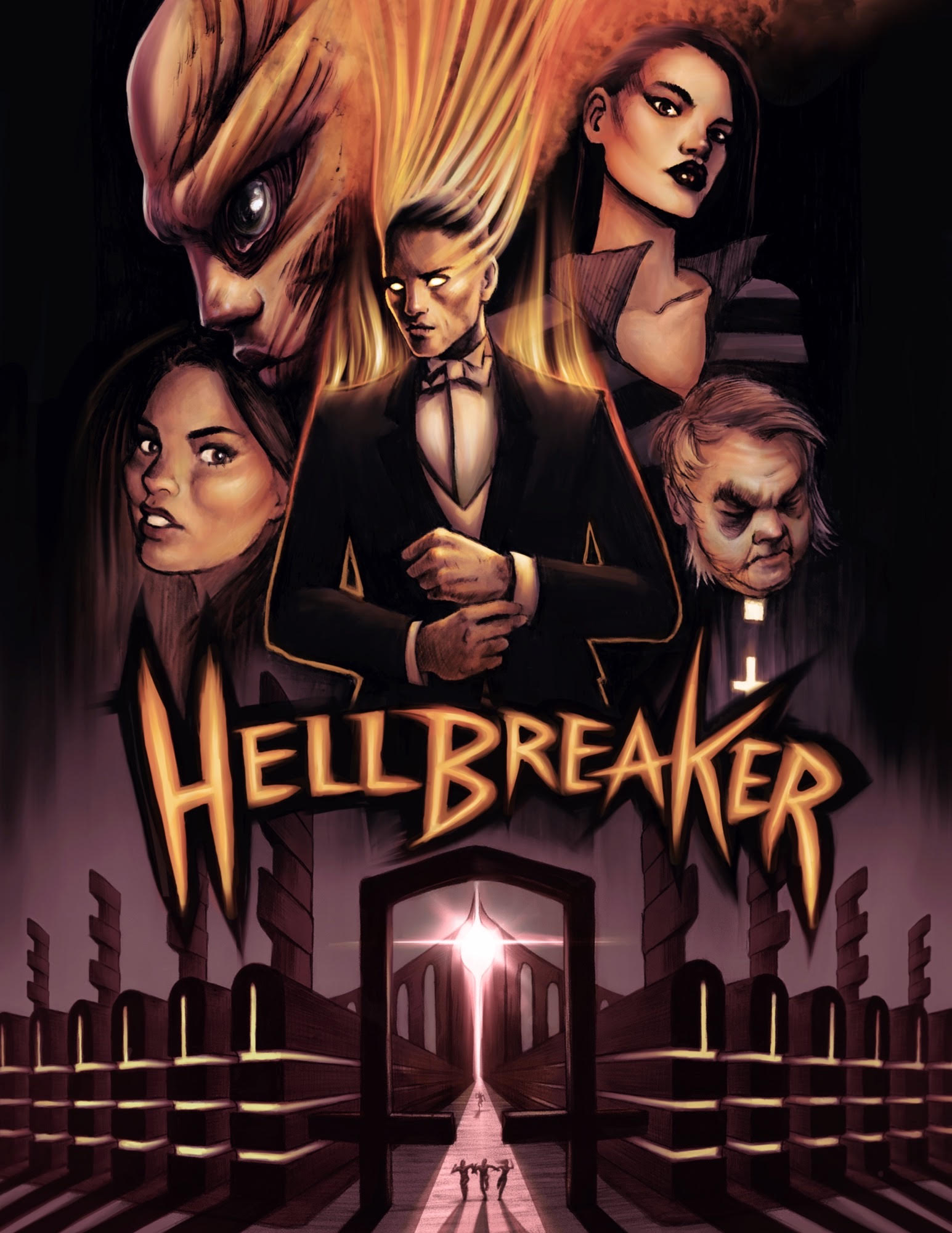 The long-term strategy of our Spacewarp project has always been for all creators to eventually produce collections of their own stories, so we’re achieving that sooner rather than later. We’ve started with Hellbreaker, though it was a difficult choice with five equally exciting rivals. Our plan is to then do the same with Xecutioners,
SF1, Fu-tant, Slayer and Jurassic Punx.

We can also return to Spacewarp anthologies as things settle down. In effect, the Spacewarp #1 was a launch pad and sampler for introducing individual titles. Future anthologies will be a useful jumping on point for new audiences.

This time, we’re going to run a Kickstarter campaign for Fire in the Blood (yep, we’re late to the party!). I’d previously excluded it as a marketing and fundraising tool, because it was a lot of extra work for us and I wanted to be sure market forces responded positively to a ‘kids comic’ as opposed to an ‘adult comic’.

But the newsstand percentages – and other sales figures – show we’ve now proven our case.

Plus, there are two huge benefits to using Kickstarter: it gives us access to a unique community of supporters that love comics. There’s some overlap with our existing readers, but a lot of new folk to reach, so that’s definitely worth pursuing. And it enables us to build a rich comics project, with lots of goodies and extras, which is great fun.

We know that our comic has to be almost complete before we launch the Kickstarter campaign, so I’ll get into that later in the year.

Finally – it bears repeating – thanks to all the artists, letterers, designers, advisers, editorial and our distributor for making Spacewarp happen and boldly going where comics have not gone in a very long time. And introducing a new generation of readers to British adventure comics.

So that thanks is especially for you, THE READERS who bought Spacewarp, and encouraged us in our efforts.

We’d never have made it without you!