I recently received some questions from Catherine, a PhD candidate studying scary kids’ stories (cool, huh?), who is producing a sample Misty-inspired comic as her final project. She wanted to know how comics are produced and this prompted me to explain some of the inner workings of the creative process. I call it the Formula.

I guess what I’d like to know is what happens between the initial inspiration and the publication of the comic.

3. Once that’s okayed, write all the episodes.

4. Or if unsure of the art, wait to see character sketches or the first episode drawn.

5. Edit the story against the art.

6. The editor may then make further changes if something isn’t clear or maybe needs censoring – eg swearing

How could I conduct a bigger poll (you mentioned you conduct a straw poll) to back up my obsession?!

Getting reader feedback is crucial and it’s a difficult and subjective business.

I’ve used a variety of methods over the years:

1. Traditionally there were the reader vote coupons, which were a very accurate view of which stories worked. An editor would tell you whether your story was popular in the vote chart and even which episodes they liked the most. They were so important they were sometimes rigged when there were differences of opinion between publisher and editor and assistant editor over which stories and artists should be in the comic. But – on 2000AD – after a few years a split developed between a minority of fans who liked the more cult artists and stories, and the majority of readers, who favoured the more classic stories. It was the latter who generally used the voting system. Fans would make their views known at conventions, signings or in letters and eventually their views became more important.

2. The forums are one valuable source today and also comic websites and conventions. Plus readers letters.

3. But for a mainstream or young adult market, that feedback is probably too specialised or too adult. So in 2012 I did a straw poll of seven local 8-11 year olds to see if they would be interested in Misty-style stories today. The results were very positive, see below for some quotes. That feedback is good enough for me, although reaching that young market is a different challenge and maybe worth a separate article. 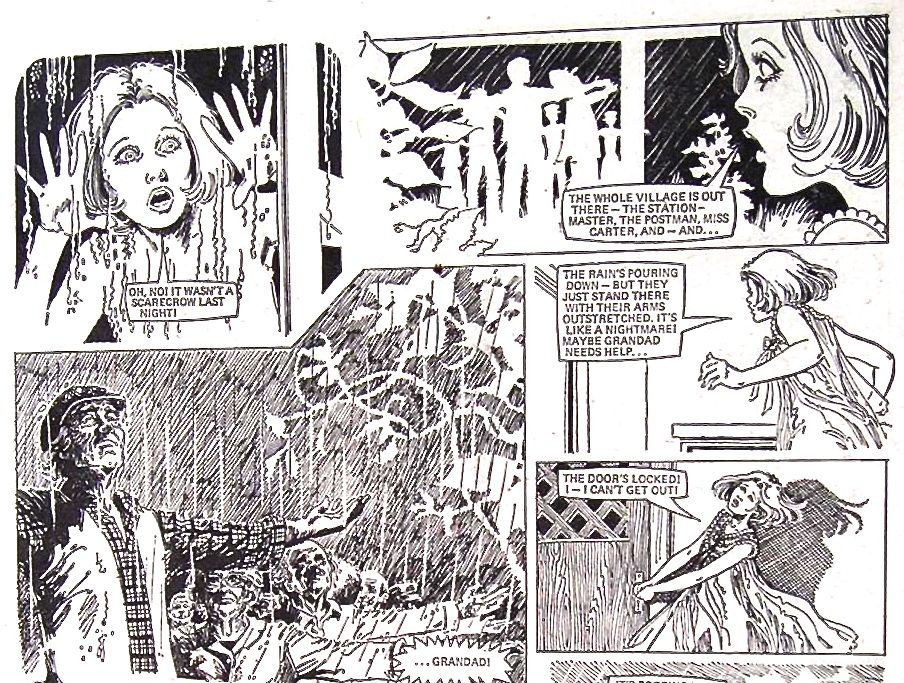 4. When I started 2000AD I arranged for a rough first issue to be shown to a class of eleven year olds. The response was very positive, which was just as well because it was too late to make any major changes! But I think we did make a few minor alterations. It’s worth saying that focus groups should not replace an editor’s personal vision. Feedback is important, but you’re not writing by committee. Creating a comic is not a democratic process!

Demographics also play a role in analysing reader feedback. So today a Misty story might be read by the original reader for nostalgia who might also introduce their daughters to the story. Then there’s the challenge of reaching a new generation of young adults who would also enjoy the stories if they knew where to find them. That’s down to marketing – a separate exercise.

Personal bias is the single biggest danger to watch out for in analysing reader polls and in creating comics. It’s the readers voice that is paramount, not the creators. The creators must come second to their audience.

But often today it’s the other way around and this has led to the decline of mainstream comics, a massive fall in comic circulation and the rise of low circulation comics.

Thus Guardian/North London teacher-types seem determined to impose their middle class values on kids comics with ‘nice’ comics, which few children I know want to read. Hence the Best of Misty some years ago bombed because it was full of nice, boring, safe, middle class, crap stories. It was the ‘Worst of Misty’ and I know Misty readers despised it. Young adults want to be challenged with tough, scary, cutting edge stories. Similarly, there was a magazine called Aquila put together by teachers that espoused the values of Eagle. I imagine it struggled to find an audience, but if those teachers had actually listened to kids – rather than deciding what was good for them – it might have worked.

It’s also possible to allow personal preference for cool stories to get in the way of readers preferences too. I knew it would take some time for cool Judge Dredd to catch on with 2000AD readers, so in the meantime I gave them M.A.C.H.1, a six million dollar man, who was more accessible, and was the number one story for the first couple of months.

This personal preference problem applies to girls comics as well. So when I worked on Romeo, a romantic companion story paper to Jackie, we were fed up with the traditional romantic artwork of artists like Badia, Galvez and Romero. It just seemed corny and old fashioned to most of us on the editorial staff. So we welcomed a new British artist who brilliantly depicted modern, cool British teenagers in a tough biker story. We were wrong, wrong, wrong. The readers far preferred the traditional heroine with big hair and doe eyes because it was dreamy, escapist and romantic. That was a lesson I never forgot. You have to change readers perceptions in order to modernise comics but gently and in sympathy with their preferences.

Similarly on Battle, John Wagner, creator of Dredd, and I wrote a great Rat Pack story. Beautifully drawn by Ezquerra, it had well-researched techno detail and a relatively sophisticated story. To our chagrin it wasn’t that popular. The next week, having run out of time, we quickly threw together in an afternoon a really crappy Rat Pack story set in a Gestapo torture cell with every medieval torture cliche imaginable. Worse, it was drawn by a B list artist, the only one who was available in the time. To our astonishment it was hugely popular with the readers. It was a harsh reminder that the readers may have different, lower or simpler expectations to us,

So it’s vitally important to really study the market, the demographic and what readers are looking for. The answers may surprise us and may not always be what we want to hear. But they pay our wages so we must listen to them. That’s how I’ve managed to stay in business.

We gave 7 kids aged 8-11 years four girls comics stories to read: Four Faces of Eve, Moonchild, Glenda’s Glossy Pages and a one-off, Roots. We wanted to see if these stories were still entertaining and exciting for a contemporary readers.

The response was overwhelmingly positive: It was also interesting to discover that the slightly dated style the fashions, and the black & white art (rather than full colour) did not appear to be an issue at all, and certainly weren’t barriers to enjoying the stories.

A few quotes from the children:

“I loved how it was building up and how they discovered her powers after a while. I would like to read more of those sorts of comics. There haven’t been any boy characters yet and I think if you added one or two boys (schoolboys) it would make the story absolutely perfect.”

“It proves that it isn’t only boys who are naughty, it’s girls as well.”

The Four Faces of Eve

“It’s really exciting, and it always leaves a mystery at the end of each page.”

“It was very interesting with all the mysteries and questions […] I think it would be perfect for a comic as, after every episode, there is a cliff-hanger which I think lots of people love!”

“I liked it because it’s a story for girls and it’s really imaginary, not all completely girly.”

“I liked it a lot because it’s very weird.”

“It was quite scary but also very exciting, the people out in the rain was very exiting.”