I’ve just finished a preliminary read of these two incredible, beautifully printed volumes produced by Irmantas Povilaika. I can assure you they are works of absolute perfection. Here we can see just how fantastic Ken’s work was, especially when he was not held back by the dreary, conservative forces that have so often reigned supreme in British comics. These volumes are grotesque, heart-warming and absolutely hilarious. A celebration of Odham’s indulgent humour, which is infinitely to be preferred to the often dull, pseudo-funny comics from Fleetway. The Fleetway ‘Fun Factory’ followed these Odham’s masterpieces and, incredibly, somehow Ken’s work still thrived in that formulaic, largely unfunny desert.

I was the lead writer on Frankie Stein in those later Fleetway years, when the character was drawn by Bob Nixon. (I was also the lead writer on Kid Kong and Bumpkin Billionaires.) So, for me, it is a real thrill to see Ken’s original version collected. I appreciate just how much better it is than my own offerings on Frankie, back in the day. I remember talking to the Fleetway editor Bob Paynter about Ken and asking why he couldn’t come back to his own character. I’d have happily sacked myself if Ken had returned and wanted to write the scripts, too. Unfortunately, it is quite normal in the world of British comics for writers and artists, then and now, to be parted from their creations which are then passed on, without any financial remuneration, to others who publishers feel are more suitable, or at least more compliant. (It happened to me recently on my character Rico – Judge Dredd’s clone brother. Rico was handed over to another writer for three text novels. The first I heard about it was seeing an advert for Rico novels on Facebook) Thus Bob felt Frankie would be so much safer in mine and Bob Nixon’s hands. He told me how ‘Ken needed watching’ otherwise he could go ‘too wild’. Issues such as moral rights and creative integrity don’t enter into it in the world of British comics.

But now, at last, I have the chance to enjoy these ‘unsafe’ originals and what a delight they are. See for instance the scene when Frankie cackles when the mad professor is smashed in the face by the Ram-Bam surprise box. ‘Har-Har-Har! Ain’t that a scream, Micky? You should-a seen ol’ Madam Macabre when it fractured the resident undertaker’s bonce! She cackled so hard, all her warts shot off and her hump flew inside out!’ Here are fabulously lurid scenes such as Frankie devouring an entire bike because the professor equipped him with an ostrich’s stomach. And a politically incorrect sequence where Frankie wants some fur-lined boots and walks down the street with a cat miaowing in each boot. Or a scene where Frankie beats his own head because he realises he has a frog’s brain and that’s why he’s so darn stupid. 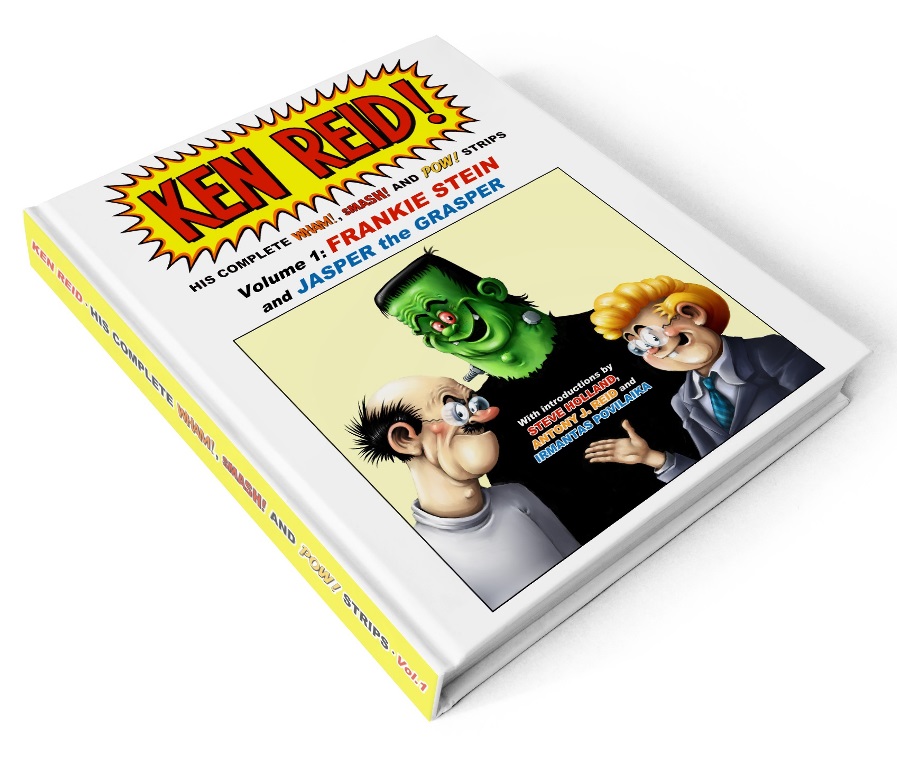 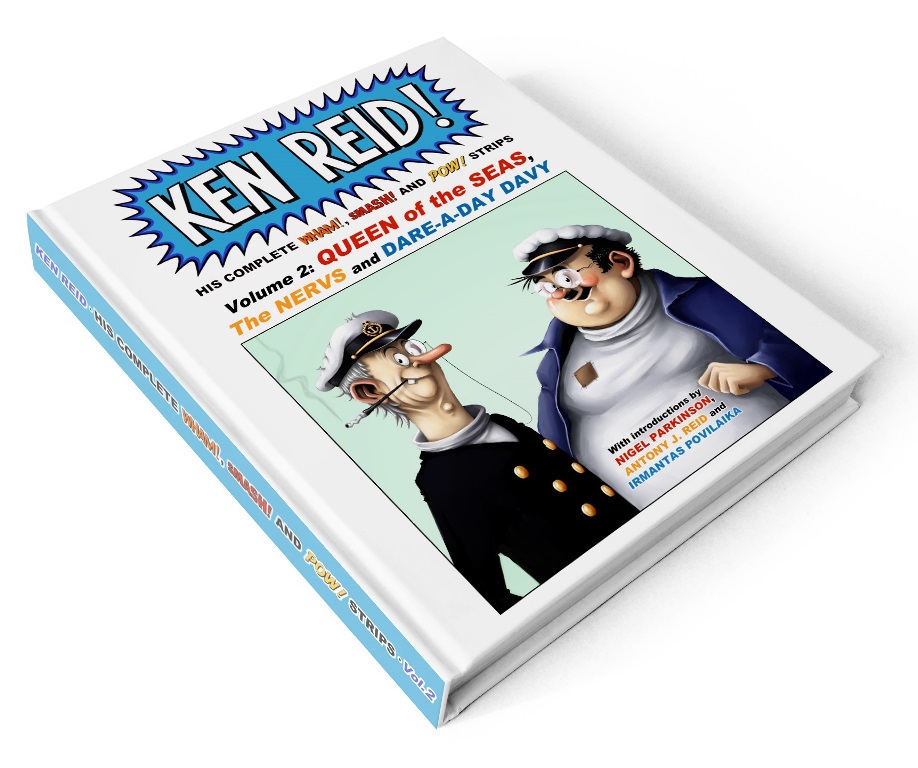 There’s an innocent black comedy about Frankie which is Ken’s unique signature and makes his original version so timeless and so memorable.

Jasper the Grasper and Queen of the Seas are also sublime. I’m looking forward to perusing Queen closely  later. Ken’s love of boats is well known and, as I doubt his Beano strip Jonah will ever be collected, Queen is a strong alternative for fans. There’s the same attention to detail and the same disasters!

Dare-a-day Davy is cut from the same cloth as Frankie Stein. It has some wonderfully foul ideas as Davy carries out the reader’s challenges every week. One story  actually had 26 pictures on a single page! Talk about giving the readers value for money. No wonder Ken had deadline and economic problems. One of my favourite stories is when a reader dares Davy to put glue on his mother’s lipstick. It sticks her lips together, resulting in her having a distended top lip as she confronts her son, prior to giving him ‘two dozen stingers’ on his backside.  Another dare I liked was ‘putting paint in the gravy when the mayor comes to lunch.’ The furious mayor tells Davy’s dad he will be evicted from his council house and Davy receives ‘twenty of the best’ as punishment.

These are windows on a working class world that mocks elders, betters and authority – yet retains a certain innocence, charm and tradition. I wonder if Ken could have depicted today’s harsher reality with the same lightness of touch? I believe he could. But would he have been allowed to? I doubt it. Thus there’s a great finale where Davy is carted off in a ‘Blackpool and district’s Bin for Barmies’ ambulance and ends up wearing a straitjacket alongside another lunatic who thinks  he is Napoleon. Or how about the  scene where Davy carries out a James Bond style karate chop on a block of solid oak. ‘Agh! Gad!’ ‘Later – after three bone specialists have reconstructed Davy’s hand and arm.’ The doctor comments as Davy leaves hospital, ‘I still think it would have been kinder to have put him quietly to sleep!’  These scenes are, sadly, far too strong for today’s pc, watered-down humour kids comics.

And strongest of all – The Nervs, featuring the fantasy people that run around inside Fatty’s Tum. In one story there is a blockage in his tum so drums of ‘undigested grub’ are piling up. The problem is solved when sausage and mash are ejected out of Fatty’s ears!  In another story, Fatty gets an eye infection, so his ‘Aunty Biotic’ arrives and gives his eye a good scrub. Unable to see where he’s going, he falls down a sewer and ‘half the town’s waste-matter oozes in through his pores!’

Absolute genius. This was a strip that was banned by Fleetway when they took the comic over from Odhams because the managing editor thought it was disgusting. Kevin O’Neill and myself pay tribute to Ken and relate what happened at the time in our dark comedy text novel Serial Killer, where we call the artist Ken Royce. Writing it was our catharsis for all our wretched years working in the Fleetway Fun Factory.

Ken really was the Rolls Royce of cartoonists and these two de-luxe volumes are the ultimate collections of his work. To me, he was the Ronald Searle of comics and needs remembering as such. These collections go a long way to Ken receiving the national and international  recognition he deserves.