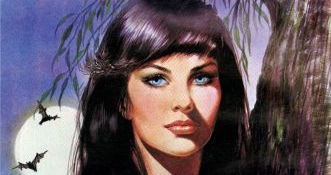 So delighted with the imminent reprint of Misty by 2000 AD, and the huge interest it’s generated. I’ve just done an interview with Samira Ahmed for BBC Radio 4’s art and culture show Front Row for broadcast tonight at 7.15pm (6 Sept 2016). And The Herald has a great in-depth Q&A with me on the subject (Graphic Content: Pat Mills tells the behind-the-scenes story of 1970s girl horror comic Misty).But of course, that interest in Misty (and girls’ comics in general) has always been there. I first wrote the below post in October 2012 as a digression on a series of posts I wrote on Judge Dredd, back when the idea that Misty would actually get a decent reprint seemed like an impossible dream. In terms of reader comments, the Misty post is probably one of my most popular blog posts.

So here we are in 2016, and 2000 AD have done a fantastic job of reprinting two popular Misty stories: Moonchild (written by me, art by John Armstrong), and Four Faces of Eve (by Malcolm Shaw and Brian Delaney).

Coincidentally, I’m in the middle of writing the first text novel in a series with Kevin O’Neill that could be described as a darkly humorous alternative history of UK comics publishing in the 1970s. And right this very week I’m writing the fictional account of how Misty was created. You could say, it’s my own vision of how Misty could have been.

The novel series is called Read Em And Weep.  Book one is called Serial Killer. Did I mention that it’s also a thriller?

If you’re a fan of murder mysteries, flawed and eccentric characters, 70s nostalgia, insider knowledge on creating comics, childhood revenge, and film noir (it’s got a lot of noir!), you’ll probably like Read Em And Weep: Serial Killer. It’s due out in February 2017 and book 2 will be published later the same year.

I’ll be releasing more info over the next few months (look out for a cover reveal at the end of October), so click here if you want to stay in touch and get the latest news. 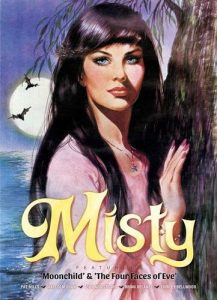 The girls comic that boys would secretly snaffle after their sisters had finished reading it.

Read Em and Weep it is!
Great and exciting news Pat!

And wonderful to see some Misty stories finally in collected form. Hope this new book is the first of many. Just seeing the cover made me go all misty eyed. Ahem!