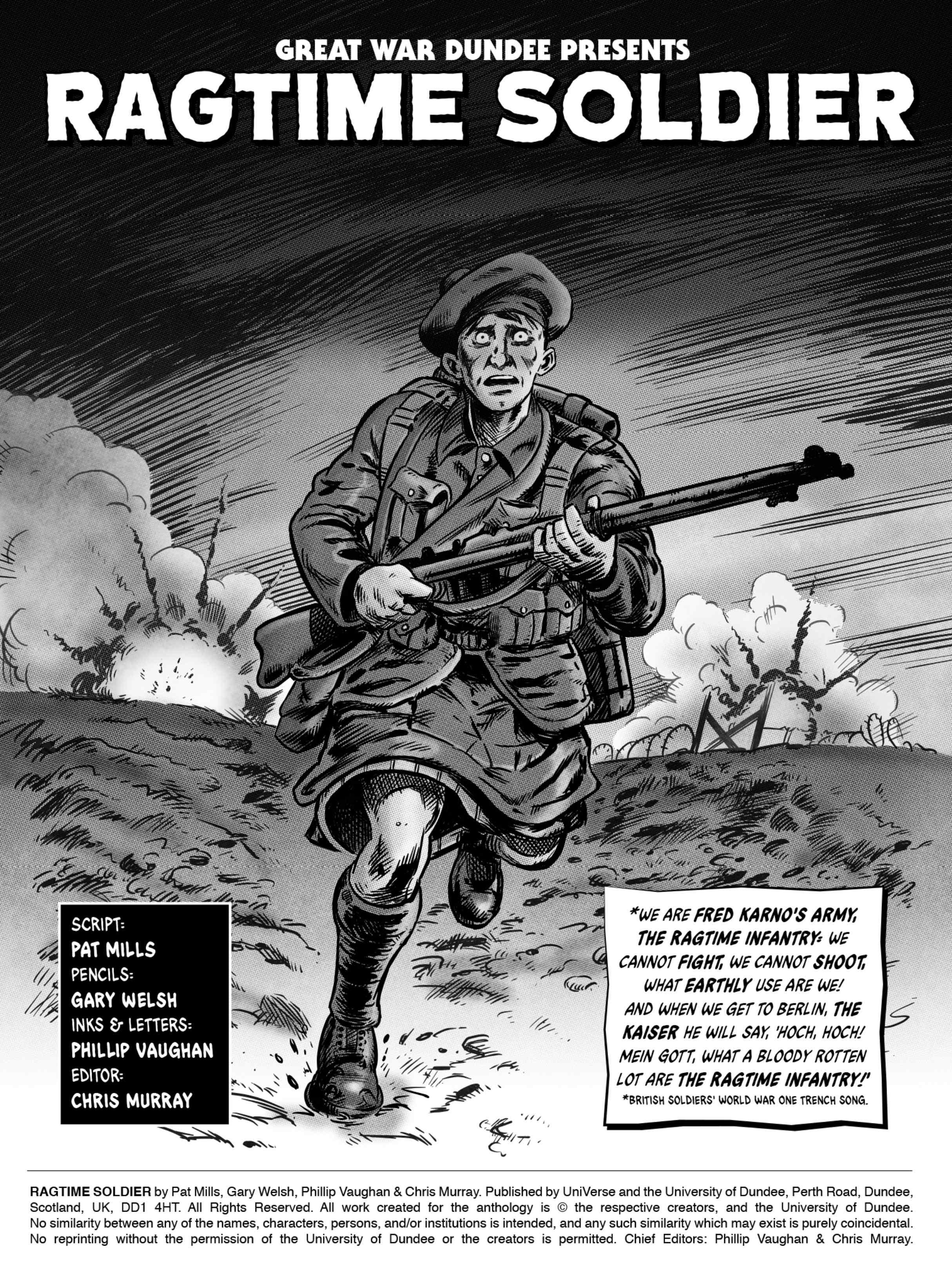 The illustration above will form the first page of my 11 page story Ragtime Soldier. Fantastic art by Gary Welsh and Phil Vaughan! As you can see, it’s very much in the tradition of my long-running anti-war saga Charley’s War. Gary and Phil have clearly been inspired by the brilliant art of Joe Colquhoun on Charley’s War to produce their own take on the Great War. Our story focuses on the Battle of Loos where Scottish losses were heavy. And Dundee’s in particular.

Robbie McTaggart is a talented player of Ragtime music, the rebellious new music loved by teenagers; hence why the troops called themselves ‘The Ragtime Infantry’. It was the hot music of its day and therefore was hated by parents and the older generation.

It was like the soldiers were calling themselves ‘The Rock ’n Roll Infantry’.

Robbie is also a member of Dundee’s legendary Black Watch – the Fighting Fourth – who went over the top to the battle cry of ‘Marmalade!’

It’s a story with a twist because it also deals with an incredible event after the war when a member of the War Resistance movement sensationally beat Winston Churchill in the Dundee election and became Member of Parliament.

We hope Ragtime Soldier will form the start of a series about Robbie McTaggart’s adventures at the Battles of Loos, the Somme, Ypres and in the grim Aftermath of the war.

More news when the comic appears in September. And, meanwhile, here’s what Phil Vaughan, one of the organisers and artists on Ragtime Soldier had to say:

The comic is part of a Heritage Lottery funded project about the Great War Dundee and the strip will coincide with the end of the project. The launch will be at the V&A Dundee on Friday 20th September. Pat will be the guest of honour.

It will kick off around lunchtime and there will be talks and a keynote by Pat. The Commando comic team have also agreed to participate. It’s an all ages event/comic and we are looking to highlight some unknown (or unpublicised) stories about WW1. This is why we approached Pat for the Ragtime script: we wanted to have a Charley’s War vibe to the lead comic strip. We are looking to expand the 11 pager to a full graphic novel at a later date and are currently looking at other funding streams. There will be other backup strips in the Great War Dundee comic, which will be given away free at the event, and also an extensive ‘making of’ section at the backend, as Pat’s research and development is second to none.

Artist Ian Kennedy has agreed to provide the front cover.

Phil Vaughan and Chris Murray at the University of Dundee are acting as editors for the publication, which we will print and publish through the uni’s imprint UniVerse, but we are looking to get it to as wide an audience as possible, so there will also be a free PDF version available to download.