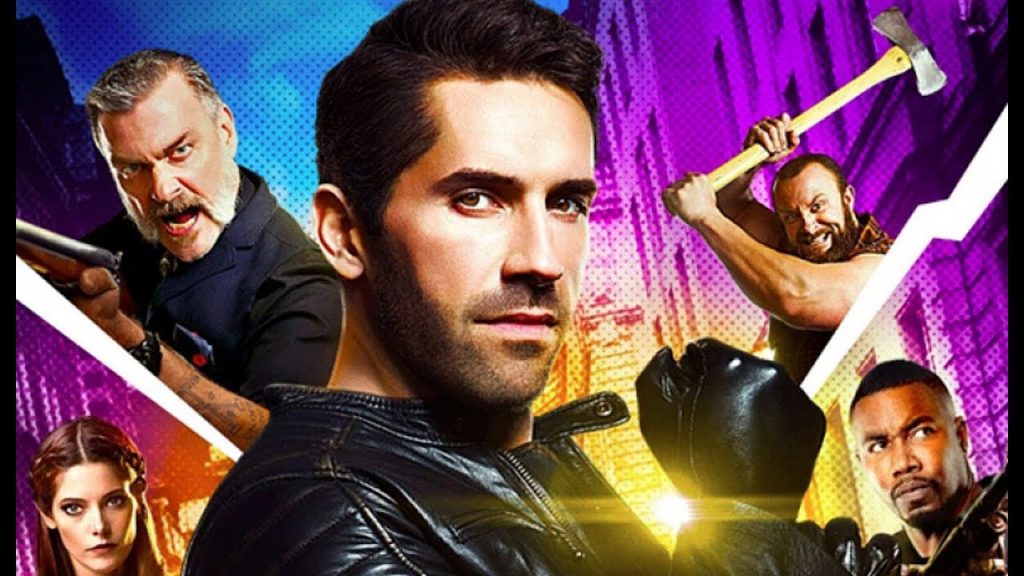 My wife, Lisa, and I sat down last night to watch Accident Man

And it could so easily have been otherwise. So let me give you a quick insight into the alternative. Accident Man

has had a lot of movie interest over the years and has been optioned several times. One American film company who optioned the character wanted to make him an insurance accident investigator because, the producer told me, ‘insurance fraud is a subject American audiences really love’. I looked unconvinced, so my agent added, ‘And, you know, hit men are so eighties’. Another film company commissioned an established screenwriter who produced a well-written but rather dull screenplay for a major studio; it had no humour and featured simplistic banana skin and skateboard accidents. Another film company, headed by a famous movie producer, and this was just a very few years ago, wanted to option the character provided that Mike Fallon could now be a retired hit man who only kills bad guys. Along, of course, with just about every other Hollywood hit man these days.

So it’s because it’s a low budget movie it can be true to its roots, because Scott Adkins has retained creative control and kept it faithful to the comic book that he loved from when he read it as a kid. That simply wouldn’t have been possible with a Hollywood blockbuster; they’d have screwed it up in one or more of the ways I’ve described above. And this baffles me, because there’s Tarantino and Curb Your Enthusiasm and other HBO series out there: Americans are really damn good at black comedy, IMHO better than the Brits a lot of the time, but somehow they seem to have a blind spot where black comedy killers like Mike Fallon are concerned. Tarantino, of course, excepted. So you can understand why Lisa and I cheered when we actually heard the lines in the movie: ‘none of that Yank bollocks, we’re British here.’

What’s so impressive about the film is the way the writers – Scott and Stu Small – rightly and sympathetically expanded and developed the characters and tied the plot together so well, and so tightly. They added topicality, with references to Brexit, Afghanistan and Iraq. I loved what they did with the elastoplast killer, the contrasting personas of special forces killers, Stu and Scott, and Jane the Ripper. And there is nothing ‘mockney’ about their British take. Mike even has a British motorbike. Yes! They are writing from the heart and with a sure knowledge of their subject. Thus they had a scene with graphic, clearly authentic detail about smackheads, and just how an ingenious and truly horrible accident would be devised. This suggested the writers had researched their new, additional material as carefully as Tony and I did when we devised the original.

Favourite scene/s? It had to be the flashback to the origins of Accident Man, based, in part, on a comic scene where my writing partner, Tony Skinner, was the driving force. I still remember us laughing our heads off as we wrote it. The pacing and the stylish directing were sublime on Mike Fallon as a kid. With a soundtrack of The Jam’s Town Called Malice and That’s Entertainment, a gang of kids bully a well-cast geeky young Mike, with murderous consequences. It’s the kind of British housing estate scene they do so well on Misfits. This one was equally good. It was followed by ‘60s-style, surreal, field training ‘accidents’ with shop dummies going up in smoke. And then there was Mike’s mentor, Big Ray, who is cleverly under-played in the scenes where he ‘interviews’ this annoying brat who has been following him around and gathering evidence that he’s a murderer. British thugs, when they’re done well, like Big Ray, are surely the most sinister in the world, more subtle and low-key than the ubiquitous Russian thugs, but equally violent. And so very humorous.

There was further excellent direction in the sequence where Mike imagines how the love of his life was murdered. That was so cleverly handled. And Charlie, his lesbian love rival, was beautiful, stylish and perfectly cast. We really feel our heart strings being torn when the shallow Mike Fallon has to cope with tragedy and deep emotional loss and is so clearly out of his depth. And we really ache – like him – for revenge.

With such a cool film produced on a shoestring budget, but with so much love, and knowing how truly awful the alternatives could easily have been, it seems churlish to criticise it. But, in an effort to be objective, I think the comedy in the third act could have been strengthened. Thus Milton (called Clive in the comic books) was, once again, very well cast, but lacked the comedy lines of Clive. Tony and I based Clive on the arseholes in our comic industry (see my book Be Pure! Be Vigilant! Behave! 2000AD & Judge Dredd: The Secret History). Clive is a victim, a masochist who likes to screw up, because he secretly wants to be beaten up. Maybe the screenwriters weren’t familiar with this rather specialised breed and therefore our Clive/Milton, understandably, wouldn’t have worked for them. For whatever reason, they played Milton straight and this made the exposition harder going. The comedy would have kept up the momentum.

With a substantially larger budget, a script doctor/editor could have sorted that and put in a little more sexiness in the third act to balance a sexy scene in the first act. They could also have found a way to keep the ecologically-orientated Charlie right through to the end, and more proactive, without obstructing Mike. Possibly by referring back to a scene in the comic book where our version of Charlie seduces ‘Mr Big’. And I think our master-villain, a Japanese martial artist, had more character than the film’s Mr Big. A script-doctor could have dealt with these issues and also tweaked the ending.

On the other hand, the film stayed well within politically correct confines, which the comic book possibly didn’t, and that may have been a factor in the way the third act rolled out. Even the superb final battle between the beautiful assassin Jane the Ripper and Mike was still surprisingly – yet attractively – PC. And what a truly great martial artist Amy Johnston is! She is a mega-star. That whole fight sequence between these two fantastic martial artists was right up there with Kill Bill. Maybe that’s why they didn’t have the fight with the Japanese Mr Big.

Also, I know from endless rewrites on screenplays myself, it can easily take four week’s work to get the third act to come out just right, without jeopardising and altering the existing material and adding significantly to the cost. My guess is that budget and time were against the creative team. And, frankly, we were in such good spirits and so on-side by the third act, neither Lisa nor I cared that much. We just loved this film version and are hoping there’ll be an Accident Man II.

So bravo, Scott! You did us proud! Congratulations on your achievement, not least assembling so many incredible actors and dazzling us with your martial arts.

If you haven’t seen the movie, do check it out. Here’s a clip of yet another highlight – the sniper scene:

is on sale in the US and Europe right now, and in the UK from 16th April.

And for those who’ve now seen the movie and/or read the comic, and are looking for more of that very British action black comedy, can I recommend the companion story to Accident Man

, that appeared alongside it in Toxic! Entitled Psychokiller, it’s also written by Tony Skinner and myself. Superbly drawn by Dave Kendal, it’s now available as a graphic novel, digitally from Comixology or as a softcover from Amazon.

Black comedy is a genre I’m still attracted to. Hence my current projects: books one and two of my thriller series, Read ‘Em and Weep: Serial Killer and Good Night, John-boy. These text novels are also full of black comedy sequences with a similar tone to Accident Man and (of course) they feature a whole lot of murder and mayhem.