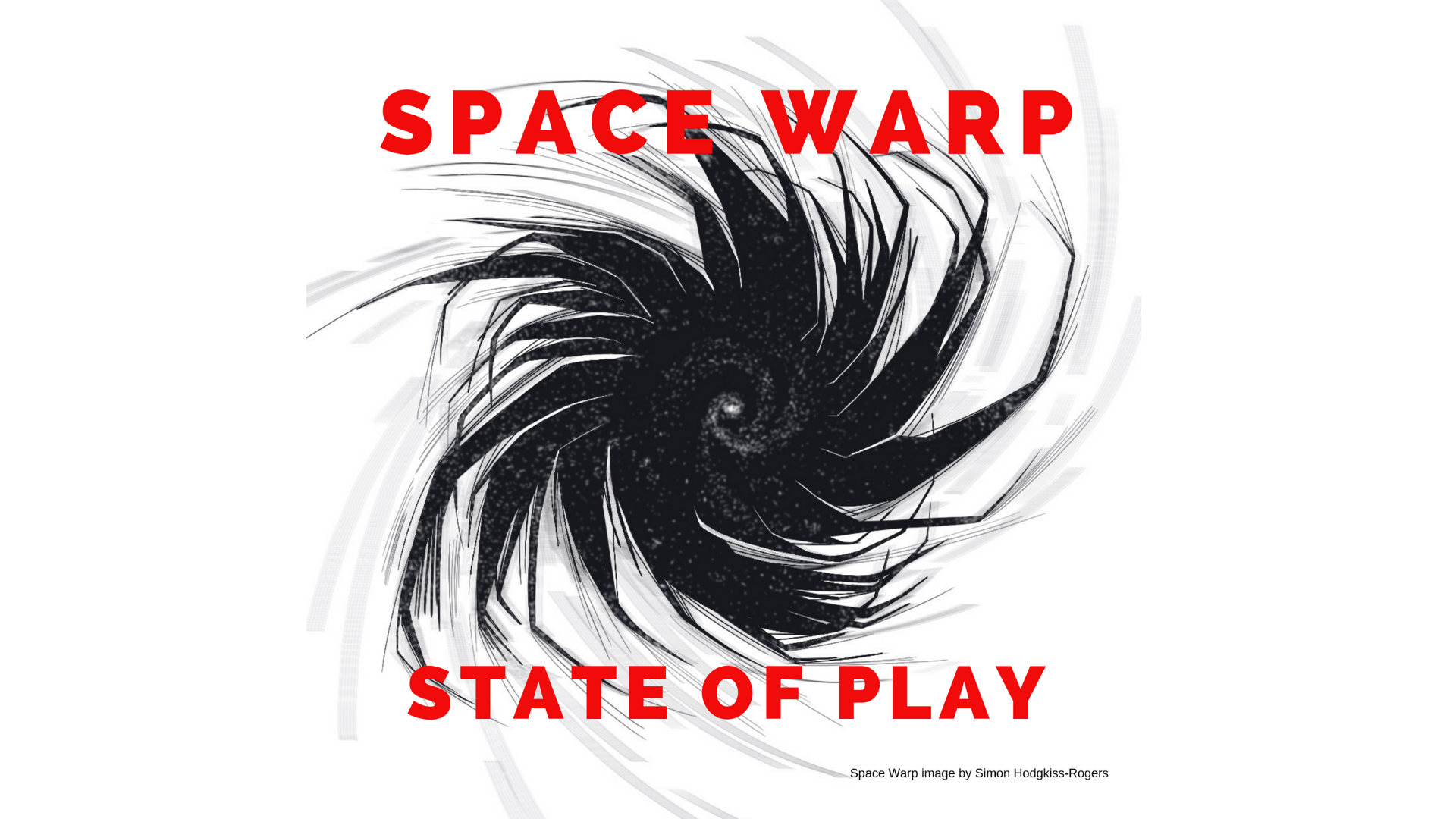 Thought I should give everyone a quick update of where we’re at on Space Warp. I’m working on the final draft of Hellbreaker this week, then all six stories will be ready for artists!

Many thanks for all the many submissions (which I really appreciate) and your enthusiasm and good wishes for the project. Some artists are getting close but no one’s there yet. So there’s still plenty of time to try out for them.

Most artists are going for SF1 – definitely the most difficult story but with the strongest element of fantasy. Several are trying for Slayer. And so far I’ve had one submission on Futant (previously Agent Impossible), which was interesting. The character was fine, the storytelling was first rate, but it didn’t have the x-factor I was looking for.

On submissions, there are some styles to avoid which I’ve mentioned before, but it bears repeating.

Always go for a focal point on the page

There’s been a surprising number of submissions of what used to be called by D.C. Thomsons the ‘Front Seat of the Stalls’ style. For example, middle distance, safe layouts, good storytelling. Sure, it’s clear and it does the job.

Trouble is, it’s not very exciting and it’s definitely NOT for Space Warp.

What I’m looking for is early 2000AD style, which was dynamic and ‘in your face’: Mike McMahon on Dredd and ABC Warriors, Brian Bolland, Carlos Ezquerra, Dave Gibbons and Kevin O’Neill.

All of them have strong inking styles, over the top, larger than life ‘in your face’ characters, humour and they all have the OMG, WTF, ‘wow’ factor. They all went at least ‘one step beyond’ what was expected of them and their stories were drawn with PASSION.

And – invariably – the characters make EYE CONTACT with the readers and draw them into the drama (so important).

That PASSION can be achieved again and below are a few examples from Space Warp to prove it.

Firstly, Simon Hodgkiss-Rogers was so passionate about Slayer that he did three images for it just for fun! Don’t worry – Slayer is still available; I shall find a way to use his great images elsewhere, probably in a prologue page.

But they show his inking style and strong designs for the crusaders which are very different yet equally powerful to other artists’ work in the same genre. Warhammer, for instance. 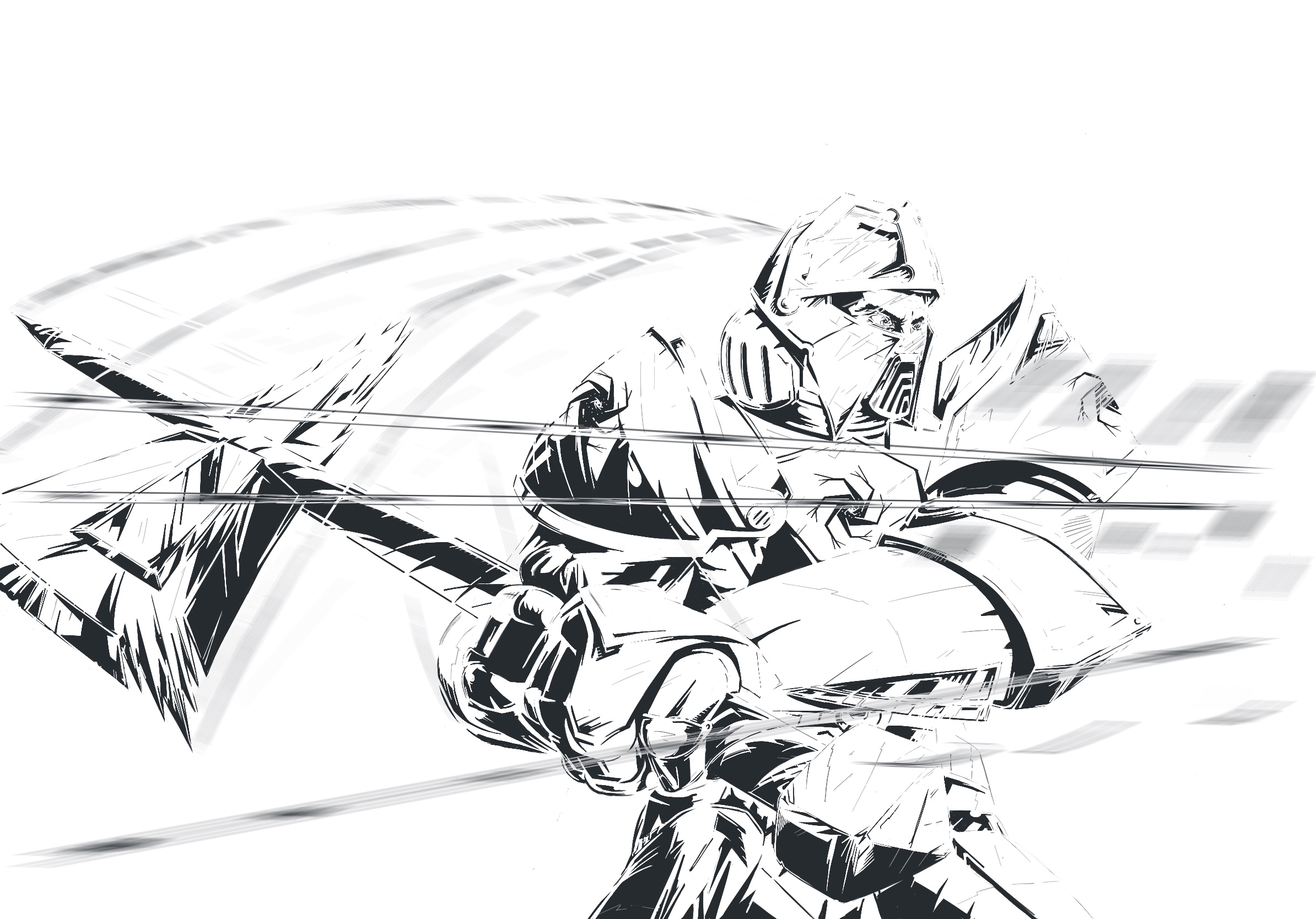 If you’re thinking of trying out for Slayer, your designs should be different to Simon’s.

Dull comics are all too often the end result when publishers buy all rights and pay pathetic royalties or none at all. Whether they admit it to themselves or not, so many artists – understandably – stop caring about their work and just knock it out for the money to pay the mortgage, hoping for something better to come along.

Then there’s Gareth’s work on Xecutioners. You’ll see from an earlier post  (Space Warp Video Diaries 2) my excited reaction to his impressive and very professional designs for the characters. Combined with his equally impressive website (well worth a look) he looks like a natural for that story. 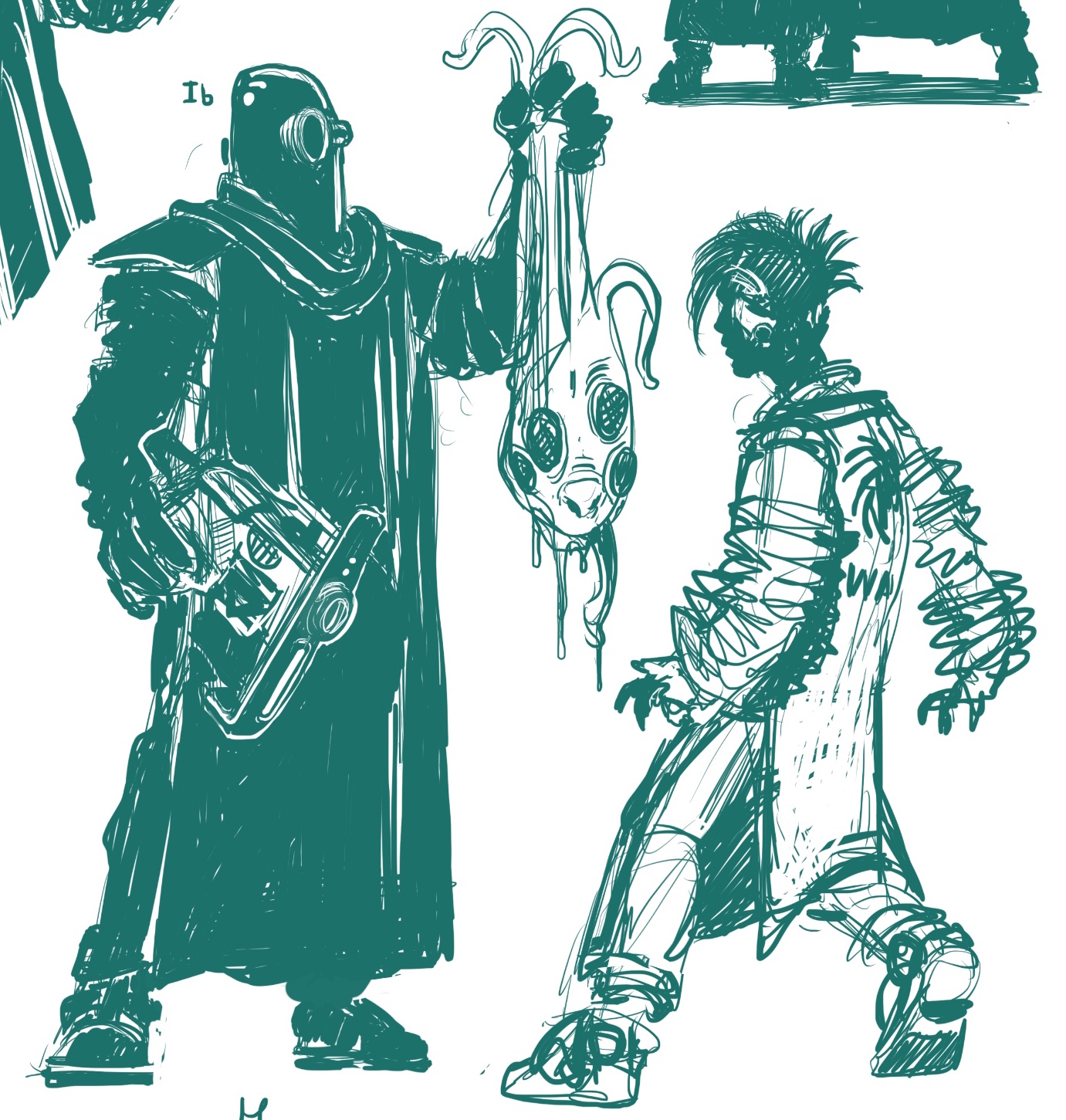 I hope these thoughts and examples help, and thanks again to everyone who has submitted so far and others who are pondering about doing so. Go for it!

Right – I’d better get back to Hellbreaker! For some reason, it’s taking a week or so longer than the other stories. Probably because it’s very high concept and working out the various characters and visualising Hell took some time! And because it’s particularly important to get high concept stories right. Not to rush them.

Same goes for the art – I know it’s hard, but please don’t rush your submission! And please do find your personal PASSION for the story. If the passion’s not there, it’ll show in your art. You honestly can’t fake it.

More info in my earlier posts on the stories, how to submit, FAQs, etc, can be found on the Space Warp hub page.

Look forward to seeing what you come up with!