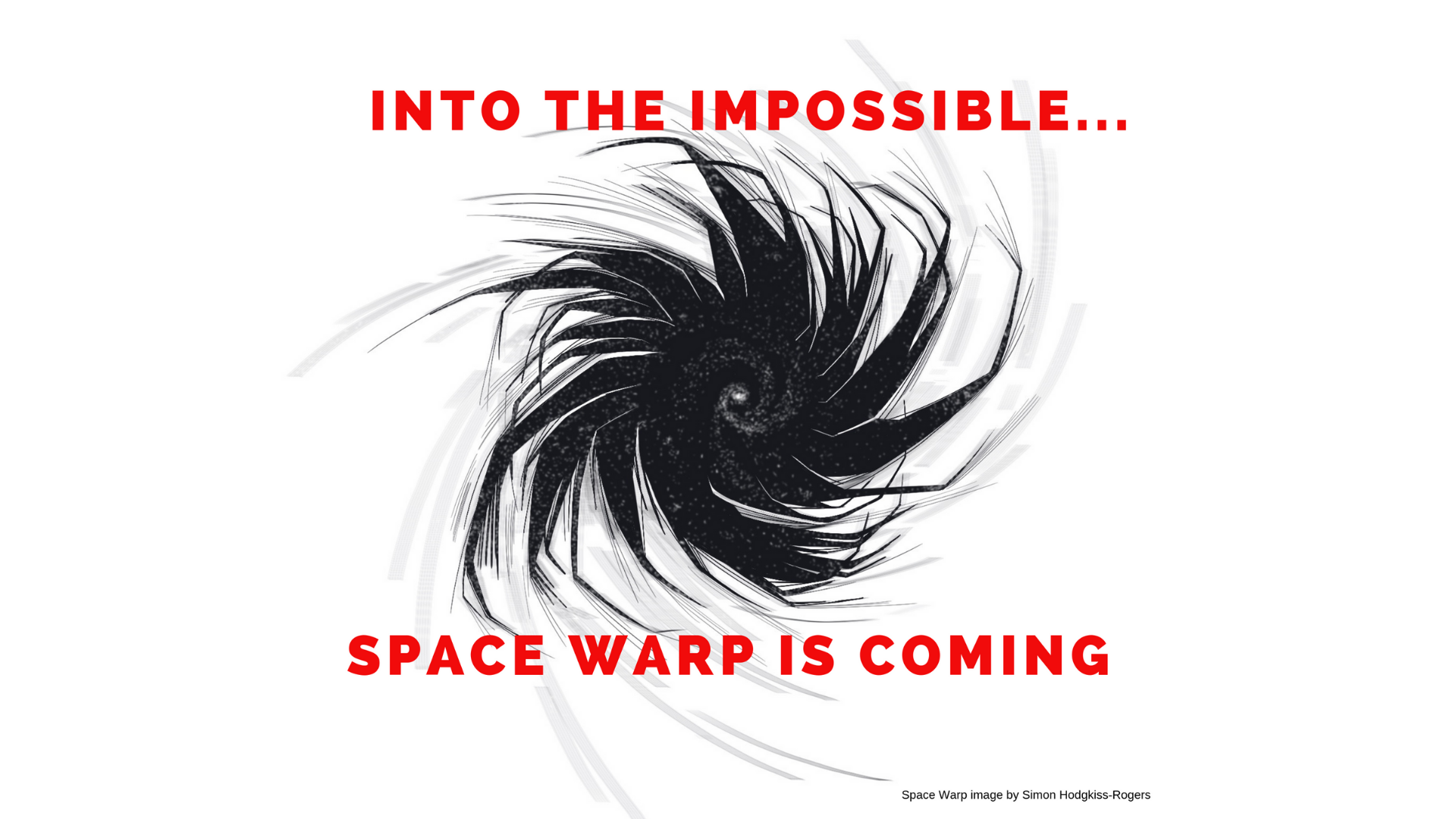 I know from talking to past readers, fans and potential new readers that what they would dearly love to see is a new British anthology comic.

The anthology comic comes from a long and exciting tradition, which British readers have enormous affection for. And so do I. It’s part of our culture, yet it’s been slowly slipping away from us. Because it has been beyond British publishers’ abilities to produce a new and successful anthology comic in decades.

The real reasons for this are the various problems I’ve previously described – in particular publishers buying all rights – problems that don’t apply to Space Warp, because the artists and writer retain copyright and control of their work.

I’m not set up to produce the stories on a week in, week out basis, like 2000AD.

However, I can produce Space Warp One as a print on demand/digital anthology. All the stories will work as standalones, with satisfying endings. No cliff-hangers!

After a suitable interval of say, six months, I could envisage a second one-shot print on demand comic: Space Warp Two.

We could continue with the same stories or combine them with a second, new wave of stories that didn’t make the first selection.

It will depend on reader feedback, sales, artists’ commitments and the talent that emerges.

And after that, who knows?

So let’s look at how the stories and art can be monetized.

The good news is that there is a lot of potential, and there are multiple revenue streams. But it all depends on the quality of the product.

First, there’s the comic itself, via royalties, detailed below.

Then, I know of at least two publications that could be interested in reprinting the stories from Space Warp One.

For example, the forthcoming French Gryyym magazine is going to reprint two of my six-page American Reaper stories (art by Fay Dalton) for an excellent fee. Our Space Warp stories will be the same high standard in black and white.

Other publishers could be interested in funding and publishing a collected edition of a particular story that appeals to them.

But we won’t know the full range of possibilities until we’re out there and have something to show to an audience.

So completing a six-page story is the way forward. When six artists have done that, we have a comic.

I will probably show just one story fully lettered here on the Storyteller blog. The rest of the stories will appear here unlettered until they feature in the Space Warp comic.

The Space Warp comic will be around 6 stories x 6 pages, plus cover and editorial pages.

As it’s a smaller package: 40+ pages, with multiple artists, it is easier and quicker to produce, with far less demands on the artist than a single story, collected edition.

All an artist has to draw is six pages.

I know that I’m asking for work that will take time to recoup royalties on, but as writer and editor, I am sharing my lifetime’s knowledge of story and strip art in a mentoring role to new artists. I have a track record of finding new talent. For some artists, it’s been a valuable master class that’s gotten them into 2000AD and beyond. For others, it’s been an equally valuable, but rather bruising exercise!

To make the figures attractive, on Space Warp One, we’ve dropped the publisher’s cut for the first 2000 units sold.

So it’s simply 50% to writer, 50% to artists (pro rata according to number of pages). After costs have been deducted for lettering, masthead and logo, cover design layout, and any paid marketing/advertising.

After 2000 sold copies, the publisher will then take a cut on further sales. This is likely to be a third of royalties, as we do with Psychokiller (see below).

The print price is likely to be £8, although this is something we’re still thinking about, because we want it to be financially viable for the artists. So it may be a little higher, particularly if we end up with more than 36 pages of strip art.

The digital edition will be priced much lower, so it falls within a kid’s pocket money range. Feedback from our beta readers agreed that many kids will happily read on their tablet or phone.

Profits shared between creators are based on the number of pages they have drawn. Apart from the cover artist, who receives extra page points for their all-important illustration. If the artist does their own lettering and provides the logo to their story, that would be factored in, too.

Provisionally, on sales of 2000 copies, Space Warp will yield a royalty to an artist of around £100 a page.

It could take a while for us to reach that figure and for the money to come in. But we’ve found with our other titles that sales continue, year on year, on all our publications.

Our estimates are deliberately cautious and conservative. However, this is just number crunching at this stage, and cover price may go up, sales may go up or down. We are also at the beginning of a journey here. So it’s important to remember that these figures are not set in stone.

There will be a minimum royalty payment threshold of £50 to keep our administration costs down.

We will do further number crunching as the project develops.

The artist retains copyright on their work and they can sell their original art.

There’s also a good market for artists selling character sketches at conventions or poster/pin-up prints of their work.

If you want to know more about indie royalties payment schedules, we’re posting a page of FAQs soon that includes details on this.

If you’re taken on as a Space Warp artist, you can offer private commissions of your characters, which is a great way to supplement your income, particularly in the early stages before royalties start to come in. More on this in Space Warp FAQs, coming soon.

I want Space Warp to have proportions as close to the original classic British 2000AD as possible. The paper quality and proportions will be similar to our graphic novel reprint Psychokiller, described below.

So the print edition of Space Warp will not be the smaller American comic size, or proportions.

Comic shops will be able order from us, and we will generate a print run, as we do for Psychokiller, Carlos Ezquerra’s Judge Dredd Colouring Book, and our novels and non-fiction.

Copies supplied to comic shops will be saddle stitch, which means stapled like a classic comic book. The edition sold via Amazon will be perfect bound, which means glued with a spine, like a book. Apart from the binding, there is no difference between the two versions.

Currently, the two main platforms for digital sales are Comixology and Amazon Kindle. But there are many other platforms, including our own storefront via Gumroad (we use this for direct sales of the PDF of Carlos Ezquerra’s Judge Dredd Colouring Book).

We’ve found that digital sales are particularly strong in the U.S. for Requiem Vampire Knight, which we offer on Kindle and on Comixology. The single volumes sell very well as does the digital boxed set (volumes 1-4). But we also get sales from all around the world.

There are also several comic subscription sites: Comixology Unlimited is probably one of the most popular in the U.S. In the UK, Comichaus is gaining traction. The first four volumes of Requiem Vampire Knight are enrolled in CU. Potentially, they can showcase an artist’s work so it appears globally.

There is the option of running individual Space Warp stories as complete story collections that could be published by Millsverse on the same platforms we use for the comic, in both print and digital format. Just as we’ve done in the past with our other titles.

We know that this option is not going to be possible for every artist, as it’s a long job.

But I anticipate at least one artist will go for it, particularly if there’s a good response to Space Warp One.

So here’s the relevant information:

First, check out Millsverse’s print on demand reprint of collected story Psychokiller on Amazon for the paper size, format and the reproduction quality. It’s 72 pages for £12.99. The full colour strip art is actually around 56 pages and Dave Kendall included an excellent bonus art gallery of horror to add extra value. The total royalty earned on this is around £3.85 per copy.

We would probably charge £13.99 for a similar collected edition of a Space Warp story.

But to make the deal more attractive, we changed it on PsychoKiller to a third to publisher, a third to writer, a third to artist. We would do the same on Space Warp collected editions.

The Psychokiller print edition sells in UK comic book shops and via Amazon. It sells digitally. And of course it can be sold at conventions. Different percentages and prices apply there.

We also use the same print on demand services for Carlos Ezquerra’s Judge Dredd Colouring Book in black and white.

Psychokiller was a reprint from Toxic! Our print on demand edition looks as good as traditional paper comics and doesn’t involve dealing with comic distributors who charge for advertising or a capital outlay for printing and storing paper copies.

The labour involved is assembling the pages, uploading the files, laying out the covers and ensuring everything is optimised for POD so they’re approved by the printers. That’s something we – or rather Lisa, my technically-orientated wife and indie publisher – has managed very successfully on all our various Millsverse books. And then, most importantly, publicizing it on social media, blogs, comic media etc. This is why we’re waiving the publisher fee for the first 2000 sales (to ensure artists get more royalties sooner), but then taking a third of the royalties later. It takes a lot of work to sell a comic!

On which subject more later in Part Three, the concluding section of Storyteller.

If there are enough submissions, and enough sales on Space Warp One there could be a case for a hardback Space Warp Annual, where stories might be longer and preliminary sketches, abortive versions, interviews, etc., could be included. And royalties divided between creators in the way I’ve described.

And just to get this out of the way: we’ve looked carefully into crowd-funding as an alternative and we know it would work, but it’s not a road we want to take as it’s too labour-intensive. And we don’t want to delegate it to anyone else to do. The way we’ve outlined is better and simpler for all of us.

Next up: Terms and Conditions, Social Media, Marketing and Copyright.