For my assassin novel, I’ve come across a truly brilliant real-life villain. A genuine Flashman. A hunting, fishing, shooting, lying monster. An absolute cad and a bounder. For me, he’s up there with Torquemada. My only concern is will people appreciate he’s genuine? Even though I’m going to name him, rather than use an alias, so there’s no doubt. His behaviour is so outrageous, he could easily be seen as a ‘comic book villain’. I’ll have to risk it. What makes him worse is, I really like the guy, which is probably very unhealthy. In my defence, I will say we all love great villains and this one is no exception. He’s the chap I mention in my inciting incident post, where the hero assassin can’t shoot him because he’s his boss. And also because my protagonist has a sneaking regard for him, which echoes my own: his wit, his dark sense of humour and his ruthlessness. I can’t wait to write him later this year.

Slough Feg in Sláine is one of my all-time favourite villains. He’s a reader favourite, too. There’s even an American heavy metal band named after him. In pre-internet days I spent a fortune on the Four Ancient Books of Wales, notably the Book of Taliesin, trawling through them, carefully noting the bard’s unique speech pattern. I didn’t want any golem speech pattern rip-offs in Sláine. These ancient tomes inspired Feg’s memorable phrases such as ‘Eyes without life, sundered heads, these are pleasing words to me.’ And ‘Am I not a candidate for fame?’ 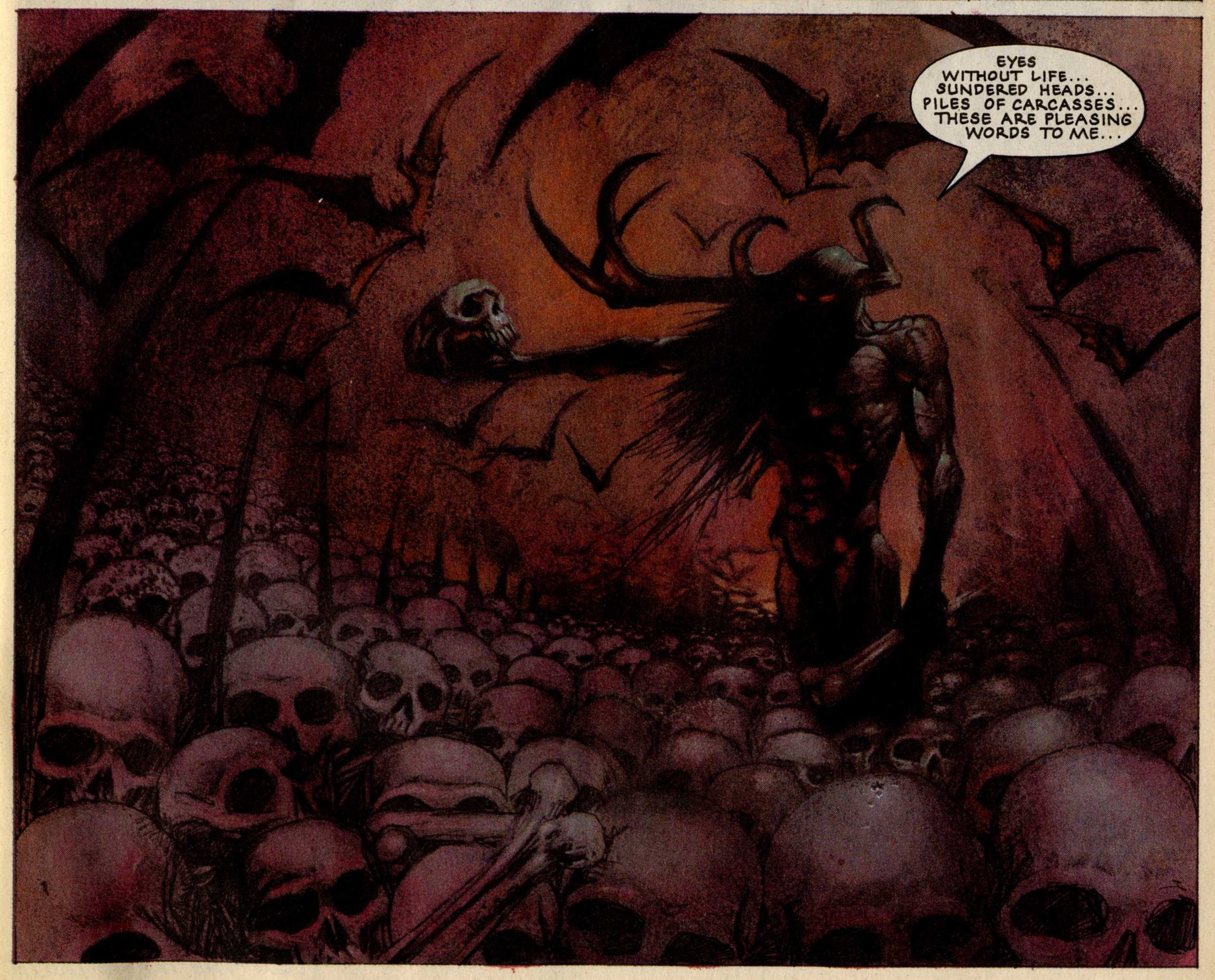 Of course all villains have to look good, so they need an original, even a unique design and here the writer is totally at the mercy of the artist who can make or break a villain. I always wanted Slough Feg to look like the sorcerer drawn on the wall in the Cave of Trois-Freres. The oldest sorcerer in the world, he is so memorably unique and, seemingly, impossible to draw. I don’t care for bog standard, ‘off the peg’, evil sorcerers, as so often depicted in Conan, so I really pushed for this image. But no Sláine artists got him right, to my satisfaction at least. All too often he seemed like a strange Womble. I still regret not asking Angela Kincaid, my ex-wife and co-creator of Sláine, to design him. Because she had a knack for making my ‘impossible’ requirements look possible – and even easy, including easy for other artists to copy. Somehow, she would have entered the soul of the sorcerer and brought this monster to life. Take her depiction of Sláine and her design for Finn’s mask – they’re both spot on and follow my directions to the letter. That’s the mark of a true creator. Simon Bisley’s Feg in the Horned God is a truly fantastic villain, but he’s still a traditional one and he’s still not that guy on the wall of the Cave of Trois Freres. Ah, well. Sometimes it’s too much to ask.

Modern day real life villains can be drab by comparison. Take Tony Blair for example – all he has going for him is the phony sincerity of a double glazing salesman, so few writers are likely to cast him as a fictional villain. I personally would have no idea how to do it. And yet his war crimes in Iraq mean he really should be included in a pantheon of villains. I hope someone can manage it.

I do think there is a case for knowing your villain personally or at least carefully researching him. An obvious villain was/is Aleister Crowley. But great writers have beaten us to him. He appears as Mocata in Dennis Wheatley’s The Devil Rides Out. And Oliver Haddo in The Magician by Somerset Maughan. And doubtless many more novels beside. But he does feature in Requiem as Black Sabbat and I think Olivier, the artist, has depicted him beautifully. I read a lot of Crowley’s life and writings to characterise him, focussing especially on his relationship with Leah Hirsig, the ‘Ape of Thoth’. 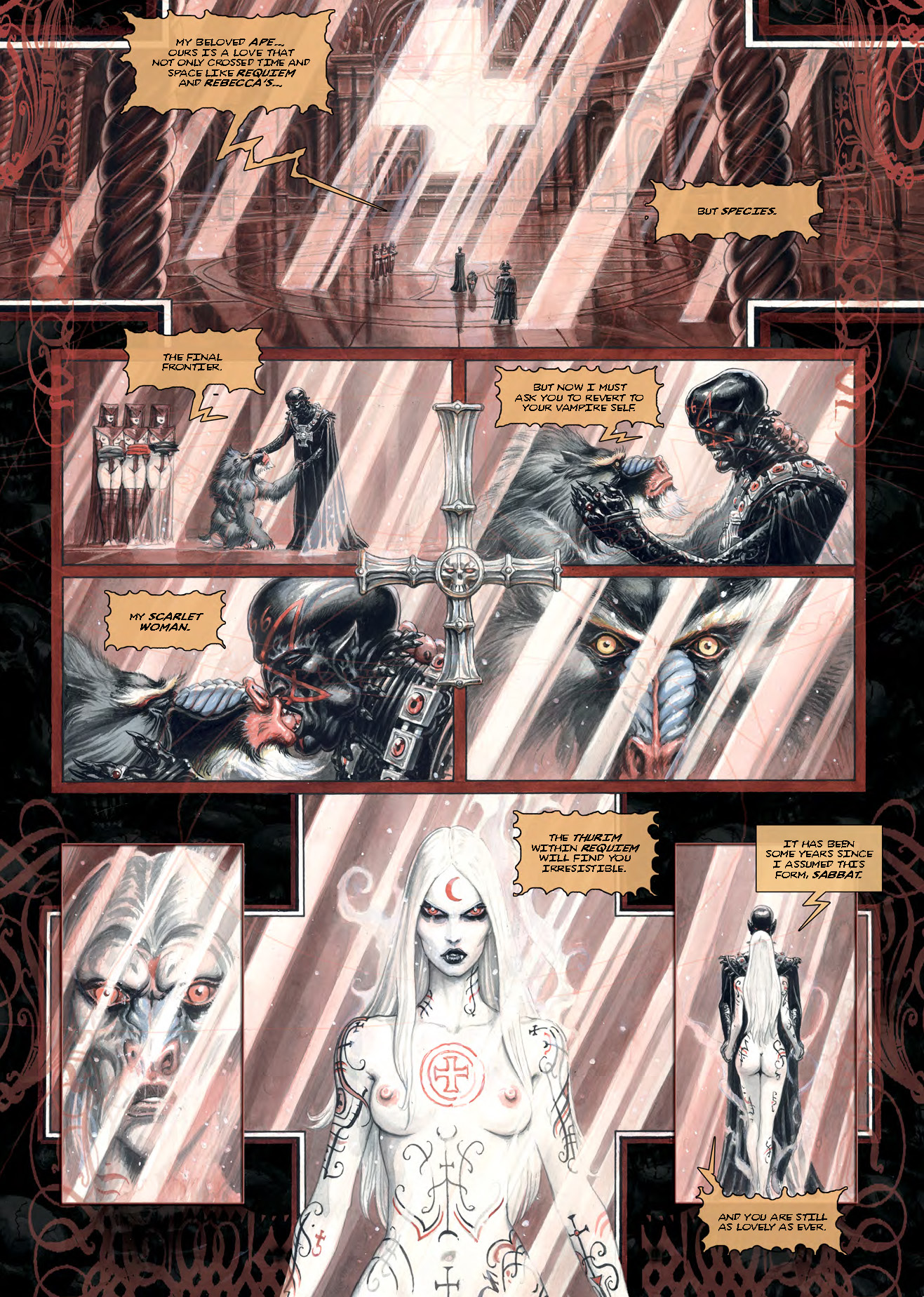 Anglo-Catholic Tom Driberg was named as Crowley’s successor and I’ve researched him exhaustively because there were many dubious characters like Driberg milling around in my youth. I thought it would be cathartic to use him as a villain, an amalgam of all the similar authority figures I came across: arrogant, predatory and upper class. A look at his Wikipedia entry will show you the potential of Driberg. Unfortunately, he’s also revered by the literati, and those who knew his numerous misdeeds have closed ranks and have never written about them, so I’ve had to give up on him.

Another great choice for a villain, theoretically, would be Baron Zaharoff, the infamous merchant of death. But he knew that only too well in his lifetime and destroyed any incriminating evidence writers could draw upon. As one author of a how-to book put it, ‘Writers are thieves. We steal people’s lives.’ But Zaharoff is burglar-proof. Yes, Troy Kennedy Martin did a great job characterising him, albeit briefly, in Reilly, Ace of Spies, where he was brilliantly portrayed by Leo McKern. And he also features as the greedy industrialist Sir Marcus in Graham Greene’s A Gun For Sale. ‘A plausible villain for those days,’ Greene said. But, because he didn’t know him personally, and there was so little information available, even to someone as well-connected as Greene, Zaharoff doesn’t come over as powerfully as the lesser villains in A Gun For Sale. Greene clearly knew them well and they absolutely leap off the page. By comparison, Sir Marcus is just okay.

After reading several biographies of Zaharoff, I gave up on him too. I couldn’t get a sense of who he really was. Eventually, after considering some alternatives, like Hiram Maxim, the inventor of the machine gun, I found a suitable and rather colourful, not to mention horrible, merchant of death who other authors seem to have missed and who I think will be a very suitable target for my assassin. The challenge will be showing a good side to him; thus far he is everything I detest and I have to watch that. I must find other aspects to his character, so he doesn’t come over as a one-note stereotype.

No consideration of villains would be complete without referring to flawed characters rather than arch villains. Yet their flaws and their destructive impact on the protagonist means they should also be classed as villains, despite their often likeable personalities. In John Le Carré’s A Perfect Spy, the protagonist’s father is such a character: the charismatic conman Rick Pym. Both Sláine’s parents are equally dysfunctional. I covered them recently in Sláine: The Brutania Chronicles and showed how their aberrant and irresponsible behaviour left a deep scar on Sláine, just as Rick badly affected his son, the perfect spy.

In Read Em and Weep, we feel tremendous sympathy for Dave Maudling’s father, especially for the way his wife treated him. But then in Goodnight John-Boy, we discover there is a darker side to him, too. As Dave’s Irish mother reveals to him:

‘How does this sound? He’d quote Charles Kingsley, author of The Water Babies, on the Famine. “I am haunted by the human chimpanzees I saw along that hundred miles of horrible country…to see white chimpanzees is dreadful; if they were black, one would not see it so much.” When Peter got drunk, he’d call me his “white chimpanzee”.’
Dave was stunned.
‘Would you like to hear more about Africa?’
‘No.’
‘He was as proud as a whitewashed pig mixing with the nobs in Government House. Celia Miles. The Honourable Celia, daughter of a Viscount with her Woman’s Hour voice, skin like lumpy porridge, hands like cold clams and Mr Punch jaw and horsey face, but, because she’d gone to Cambridge, he just couldn’t keep his hands oﬀ her.’
‘I really don’t want to know about dad’s infidelities.’
‘Why not?’
‘Because yours are enough.’

Both Dave’s parents are flawed and left a deep scar on him. Villains should be multi-facetted, not just cardboard cutouts, which comic villains traditionally used to be. The more we can see their point of view, the more memorable they’re likely to be.

Judge Death certainly has a coherent and memorable point of view. And there is an appeal about Torquemada with his hatred of aliens which surely touches a nerve of recognition in all of us. I very much doubt that intelligent alien life will be benign and kindly towards human beings. That’s just a comforting fairy tale in the original Dan Dare and Spielberg’s Close Encounters of The Third Kind. But in the remote possibility that aliens do turn out to be good guys, they won’t last long at the hands of humans, given our track record. So, loathsome as Torquemada is, he does, potentially, bring out the xenophobe in us. It’s why I would endlessly mock him – just in case readers grew too fond of him and his foul but populist message: Be Pure! Be Vigilant! Behave!

I decided a very long time ago that if I was going to remain in comics, I would have to explore the real nature of evil and feature people who are true villains, not just the usual comic cardboard cut-outs, not just pantomime villains in dark cloaks with manic laughs who I find insufferably boring. That search for the true nature of evil found its pinnacle in Third World War and the real causes of world hunger. The corporations responsible know exactly what they are doing and the consequences of their policies and are far worse than the usual bad guys we see on screen, in novels or in comics. In the course of Third World War and Finn, I found a way to make the corporate bosses come alive and be every bit as engaging as the standard psychopaths and terrorists who I believe are deliberately designed to distract us from the truth. Generally, comics avoid such controversy and go for ‘safe’ villains.

There was considerable opposition to Third World War from my fellow professionals, even though it worked at the box office commercially. I guess they felt this direction in comics was a threat to the safe escapism of science fiction and fantasy. Ground down by endless negativity, I sometimes wondered if I had indeed gone too far. I voiced these doubts at a recent talk I did in Gibraltar, quoting the episode where I featured the Nestlé baby formula scandal and the associated deaths, a scandal which is ongoing to this day. Not the usual subject matter for a boys comic! And quite difficult at the time as Nestle was a major advertiser for the publishing house. I talked to an organiser of the Nestle boycott and gained some insights into what makes these corporate villains tick. To my surprise, the audience said they remembered the episode and had no problem with it as I’d found an entertaining way to put their villainy across. So I take heart from that; not least because I don’t see myself as part of a professional circle that makes entertainment their only goal. For me, there always has to be more. So I hope when Third World War and Finn are finally reprinted, it will demonstrate ways it can be done and more genuine villains will follow. The field is wide open. There’s a lot of the bastards out there.

Next week, I look at where comics began – with ‘8 – 14 age group comics’. The audience we deserted but is still out there.