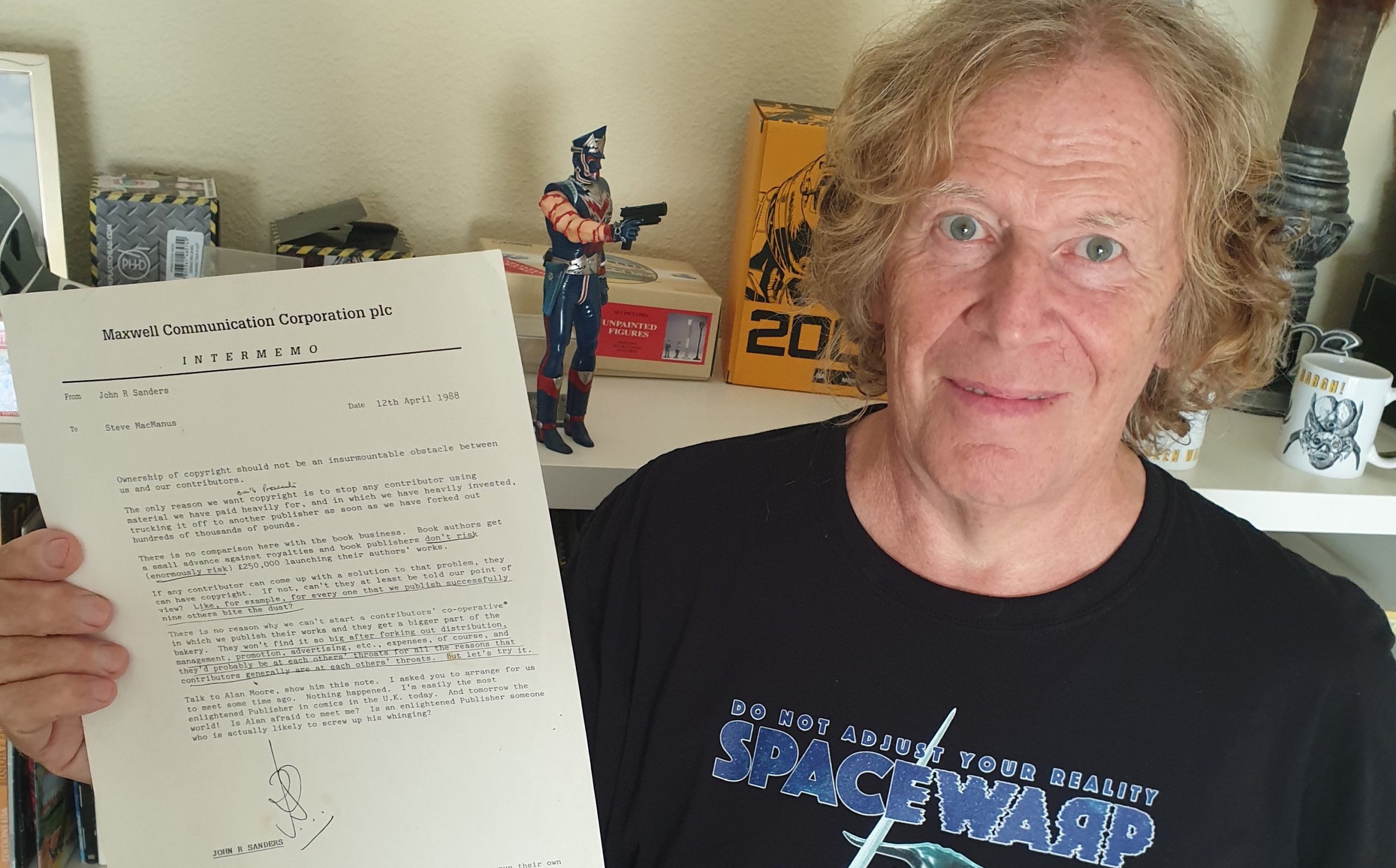 You may have seen me on the Cartoonist Kayfabe YouTube Show, talking about my new comic SPACEWARP and reading out the most astonishing memo from a 2000AD Publisher.

I’ve got a scanned image of it at the end of this post for you to peruse at your leisure.

In my view, this memo was a landmark moment in the history of British comics. It’s never appeared anywhere before, AFAIK, and tells you a great deal about what we as British comic creators have to put up with, then and now.

As you will see, there is a total disdain for creators, and it demonstrates the highly successful publisher’s technique of ‘divide and rule’, which has been the curse of British comics.

There are many other examples I could give you from the early days of 2000AD right through to the present day. Because if creators are ‘at each other’s throats’, then it conveniently keeps the heat off the publisher.

But it’s insulting to claim that wanting a better rights deal is ‘whinging’. It’s not, of course. Alan was absolutely right to try and get a better deal for himself. Good for him!

In the same way, then and now, I’m similarly referred to as a  ‘troublemaker’ or a ‘whinger’ because I continue to speak out against a dated publishing system.

Here’s my recollection of the events. Doubtless I’ve summarized the finer details, but these are most certainly the broad brushstrokes.

The memo was sent to me by Steve McManus because he was canvassing opinions on how we as freelances would feel if only one of us 2000AD writers and artists got copyright.

He rang me up after sending me the memo and said that there had been a further development.

John Sanders was now prepared to give Alan copyright on Halo Jones because he was such a hot property and they wanted to keep him. In fact, McManus had actually already promised copyright to Alan.

So what did I think of that?

I said that was fantastic! Kudos to Alan for daring to stand up for his rights! Well done!

But John Wagner, Carlos Ezquerra, myself and many others who had made 2000AD a huge success for over ten years, right through till 1988, the date of the memo, were surely also deserving cases? And we should ALL similarly have copyright on our work.

Anything else would be unfair. Right?

That was the answer McManus was looking for from me.

I believe he was looking for a Fall Guy. So he could say, ‘Well, Pat says that’s not fair…’

As a result of my response, and perhaps others, too, McManus or Sanders (you figure out which one) felt all contributors would demand copyright, and we would be very pissed off if only one creator got it. So it ended up with none of us getting it.

And Alan would, presumably, not have been very happy about the offer being withdrawn.

In fact, it’s history repeating itself. Some years earlier I was actually given copyright on my stories for 2000AD for around two months, and then it was abruptly withdrawn, almost certainly because other creators had, quite rightly, asked for the same deal.

During those two months I wrote Terra Meks, on which I still own the story copyright. Rebellion can only reprint it with my permission, which I have happily allowed them to do. It’s why it’s such a high-quality story, as well as high quality art, because I own the rights to the script.

Nothing’s changed since that memo. In fact, in some respects, the situation is worse today. So like so many other 2000AD artists and writers before me – including Alan – I was left with no choice but to leave. To finish off my work on the comic I love dearly and turn out the lights.

As the Creator of 2000AD it’s been the hardest decision for me to walk away from my creation. But it had to be done.

Because I’m so tired of my legitimate complaints being ignored or dismissed as ‘whinging’. Or whatever they call it today.

So, instead, I’ve produced SPACEWARP, where creators finally own their own work and get a proper share of the profits. That’s the reason the standard is so high.

High standards are not economically viable if you sell all rights to your story and receive token or no royalties.

Early sales returns show SPACEWARP is working. And the five-star reviews indicate it’s pressing the same buttons as early 2000AD, which is what so many readers tell me they wanted.

A comic for readers of ALL ages, rather than adults.

SPACEWARP is an important step in changing British comics for the better. I hope it will encourage others to do the same.

And you, the readers, are central to changing things. Because the power lies in your hands alone to make those changes possible.

Thanks for your fantastic support of SPACEWARP.

As promised, here’s a close up of that memo: 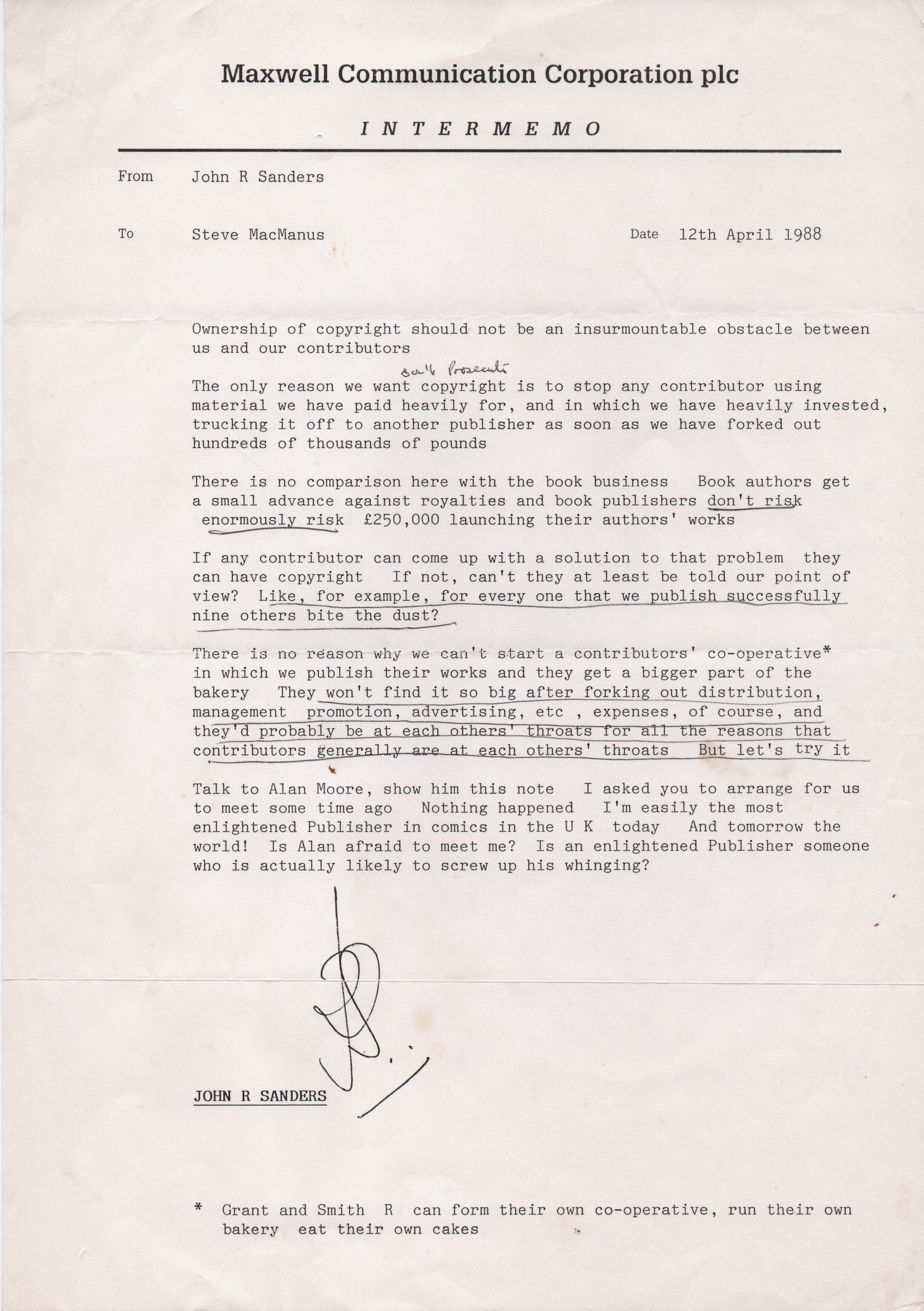