Several readers have asked me about world-building and how I go about it. I guess this is because my stories in 2000 AD and elsewhere are known for having fully realised worlds. Judge Dredd was one of my first challenges. Carlos’s magical Mega-City One in its first visualisation in Prog 2 has never been beaten. I don’t know if anyone else feels the same way, but I think that’s a great pity. That city created a sense of mystery and wonder, which I don’t think has ever been repeated in subsequent stories. In fact, progressively over the years his strange and alien starscrapers have been visually diluted by other artists into rational and traditional skyscrapers that would not be out of place in today’s New York or Dubai. Why? Surely the whole point of science fiction is the ‘wow’ factor? We need to be astonished and – all too often – we’re not. Clearly I’m in a minority, but to me they’re often quite disappointing, even dull on occasion and certainly lacking in science fiction intrigue. I wish I’d done more to ensure that original, joyously irrational Gaudiesque element was not dragged down to the sober reality many of us can find in our real world just by looking out our windows.

The cops, too, needed a science fiction definition during those first critical episodes before John Wagner returned to his creation – I recall watching and reading every imaginable future cop story to inspire me. Death Race 2000, Logan’s Run and Flow My Tears the Policeman Said by Philip K. Dick come to mind. But nothing clicked and, although I featured all the predictable Orwellian touches of a future police state, I couldn’t get an angle on Dredd I was really happy with. That took Peter Harris with his seminal episode one, which established the whole justice system. Along with an addition by Kelvin Gosnell and myself that the villain should be marooned on ‘Devil’s Island’, a traffic island from which he could never escape. An insane future shock punishment rather than a sober and dull to read prison incarceration. 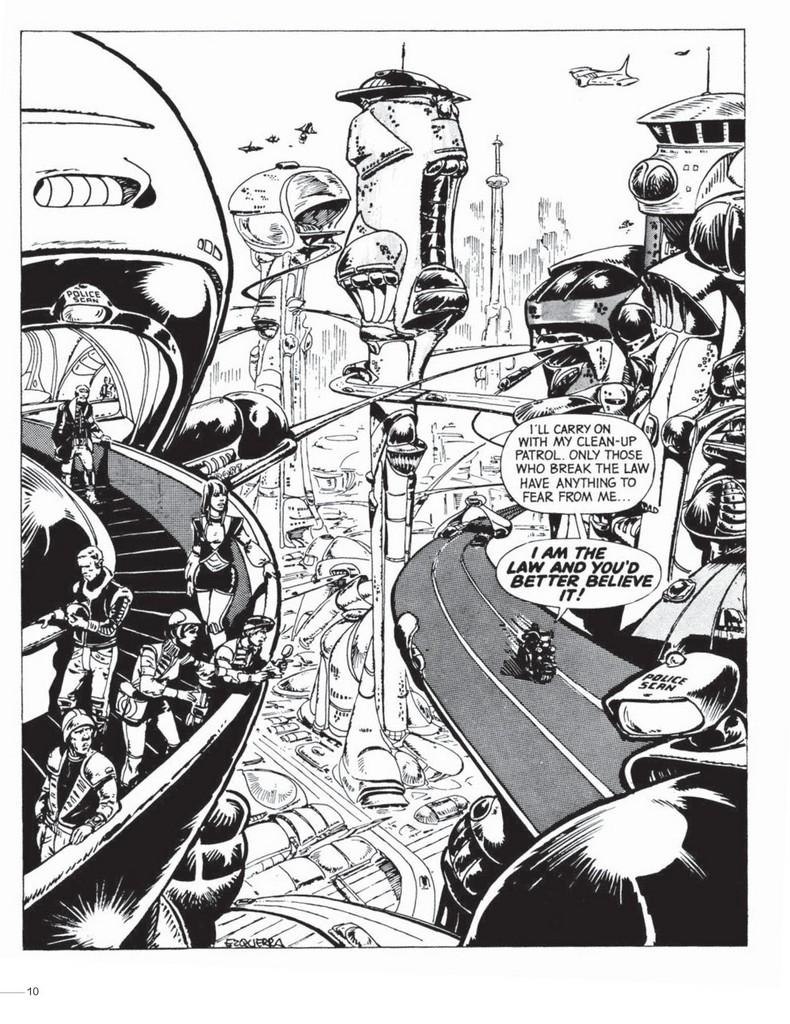 The real science fiction magic appeared shortly afterwards with John Wagner’s crazy brainblooms that raised the imaginative bench mark further and I pray will stop Dredd forever from being watered down into a staid and ‘sensible’ sf police procedural series. Intuitively, and possibly without any conscious calculation about world building, I think John realised the population of Mega-City had been driven mad, thanks to the President pressing the nuclear button and the despotism of the Judges who succeeded him. This is the key to the richest vein of Judge Dredd writing, for which John is still unequalled. Madness is Mega-City’s true hallmark, with dull rationalism rightly dragging its heels behind it. 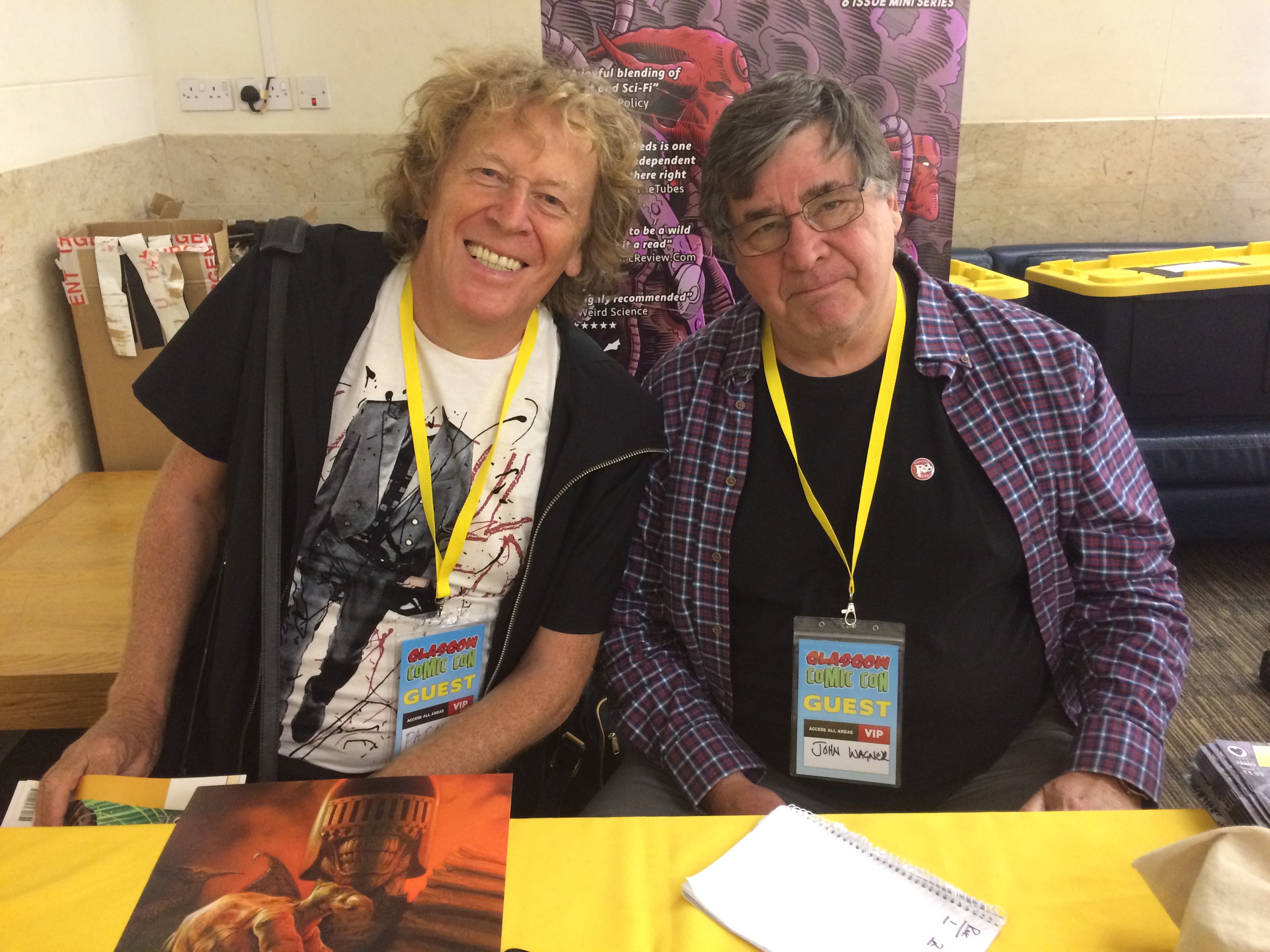 Once the justice system was in place, it left so many questions still unanswered. How did these terrifying Judges come to power? So, at the first opportunity, in The Cursed Earth, I covered the origins of the Judges and the end of the American Presidency. I guess it’s the history buff in me that needed those answers. But, once again, it doesn’t have to be portrayed with dreary rationalism. Further madness is required. So I relished having three crazy-looking, vampiric robots keeping alive the President who pressed the nuclear button by giving him blood drawn from innocent victims. Of course there are many more sensible ways to keep the President alive, but they would lose sight of the theme that generates Dredd’s world: insanity. I gather there’s now a text version of the origins of the Judges, doubtless drawing on my foundation stones laid in The Cursed Earth.

Flesh was a particular challenge for world-building. Once I had the premise that time travelling humans were farming dinosaurs for their flesh, it was so wild, it needed elaborate world-building to make it credible. It left endless questions. What should their uniforms look like? Obviously western, but they needed to be futuristic at the same time. Boix did a great job visualising the cowboys, but they and their slaughterhouses were a little too squeaky clean. It needed later artist Ramon Sola to make them look grubby, and Kevin O’Neill to embellish the abattoir into an industrial-looking factory. I used Angus McKie sf cover to visualise the fleshdozers that picked up the dinosaurs and dispatched them. Art director Doug Church designed the container system where the flesh was then beamed up to the 23rd century. I also needed lots of strange and cool vehicles, so I bought a book especially for the purpose, passing the references on to Boix as the basis for herding the dinosaurs. 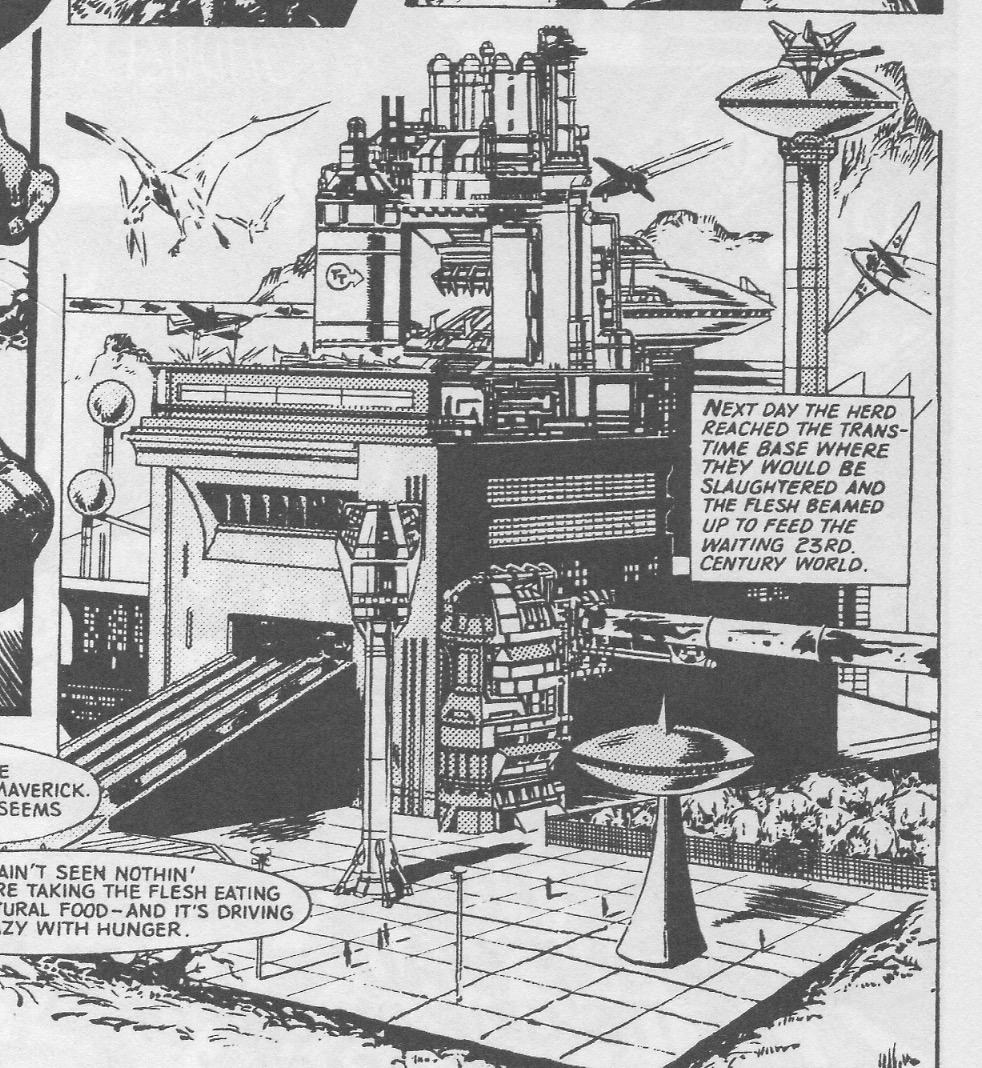 This brings me to one of the principal dangers of world-building – the dreaded exposition. It’s an important subject that I should come back to – because it’s the curse of so many works of fiction, including some very successful ones, such as The Girl With The Dragon Tattoo and Dan Brown novels. In my opinion, both have too much exposition. Exposition runs the risk of boring the readers to death with great chunks of explanation and talking heads when they just want to enjoy the drama and the characters. Exposition is particularly prevalent in science fiction. You build up an elaborate world and then write any number of episodes or chapters explaining your ingenious idea by having characters nattering to each other. I know lots of revered sf writers do this and sf buffs love it. Arthur C. Clarke with his Rama series and Larry Niven with Ringworld: both rightly regarded as classics. In film or comics however, the ‘travelogue’ approach won’t wash. I did the same thing on the early episodes of Flesh, explaining the involved set-up, and it was actually a mistake. The world should be revealed through a drama featuring the main characters in conflict. Thus Flesh became really popular once Old One Eye, the T. Rex heroine, and Claw Carver, the human bad guy, were introduced.

I didn’t make the same mistake on Nemesis. I built the world up through drama. The main characters – Nemesis and Torquemada – are endlessly in conflict and their world is introduced a little piece at a time. I had no idea what Torquemada meant when he said, ‘Be Pure! Be Vigilant! Behave!’ But I finally had to make sense of them and start world-building. I recall going for a long, long walk in the park pondering on the Grand Master’s holy words. After several hours walking round and round in circles, muttering to myself, avoiding the eyes of dog walkers who were looking at me curiously, doubtless thinking, ‘Why hasn’t he got a dog with him like the rest of us? What a weirdo!’, I finally had my Eureka! moment. Torquemada intends to cleanse the galaxy of all alien life and this means ‘no dallying with the deviant’.

Progressively, world-building got easier. The Resurrection world of Requiem is Earth ‘inside out’. So everything is generated from that one principle. Time runs backwards. Evil is good. Smoking, gluttony and the other vices are positively encouraged. Where there is land on Earth there is sea on Resurrection. And so on. I relished it so much, I even have the empire of Dystopia (based on Britain, of course) singing the Dystopian national anthem – ‘Rule Dystopia’ – as they go to war with Requiem’s vampires. 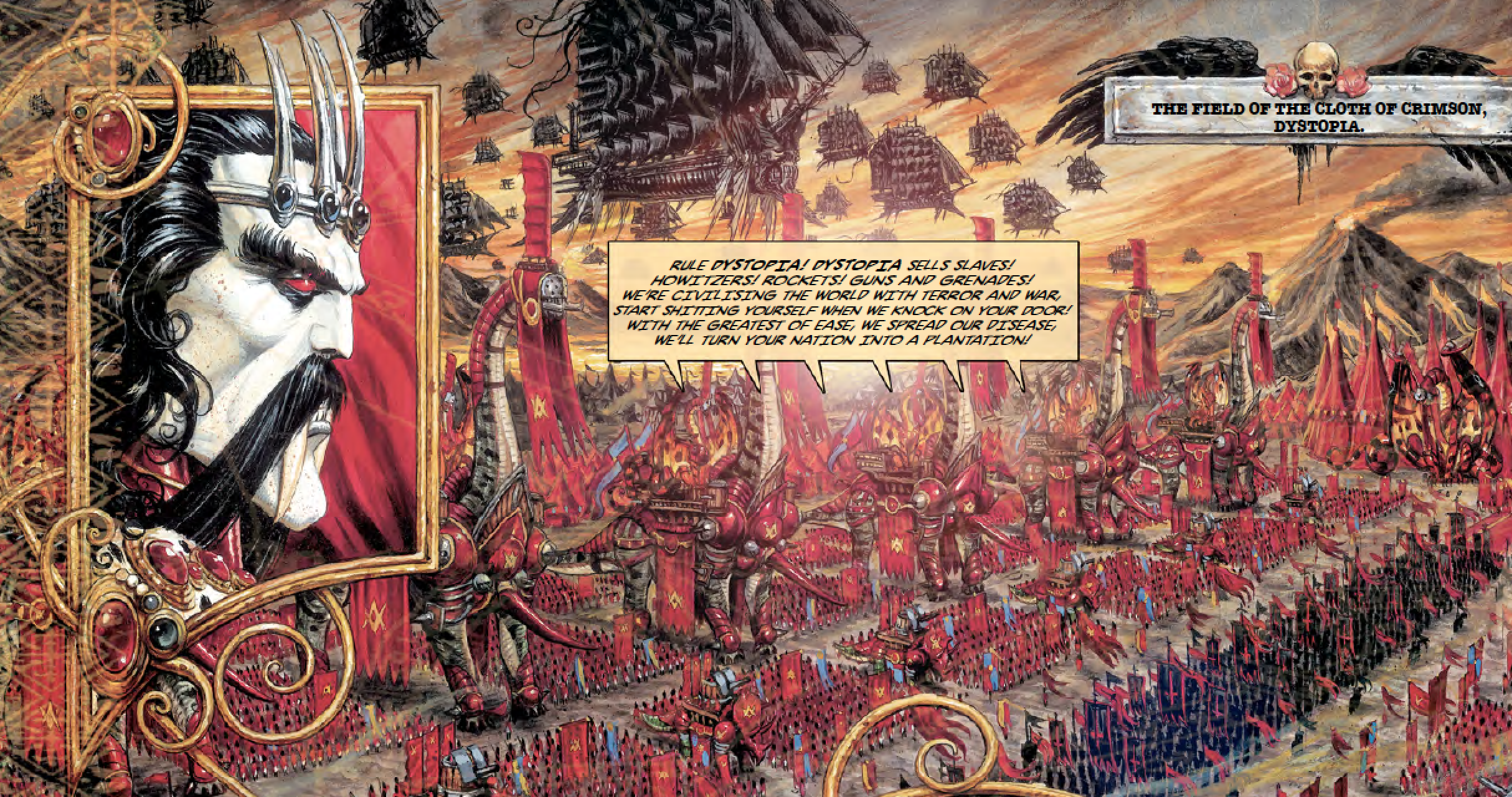 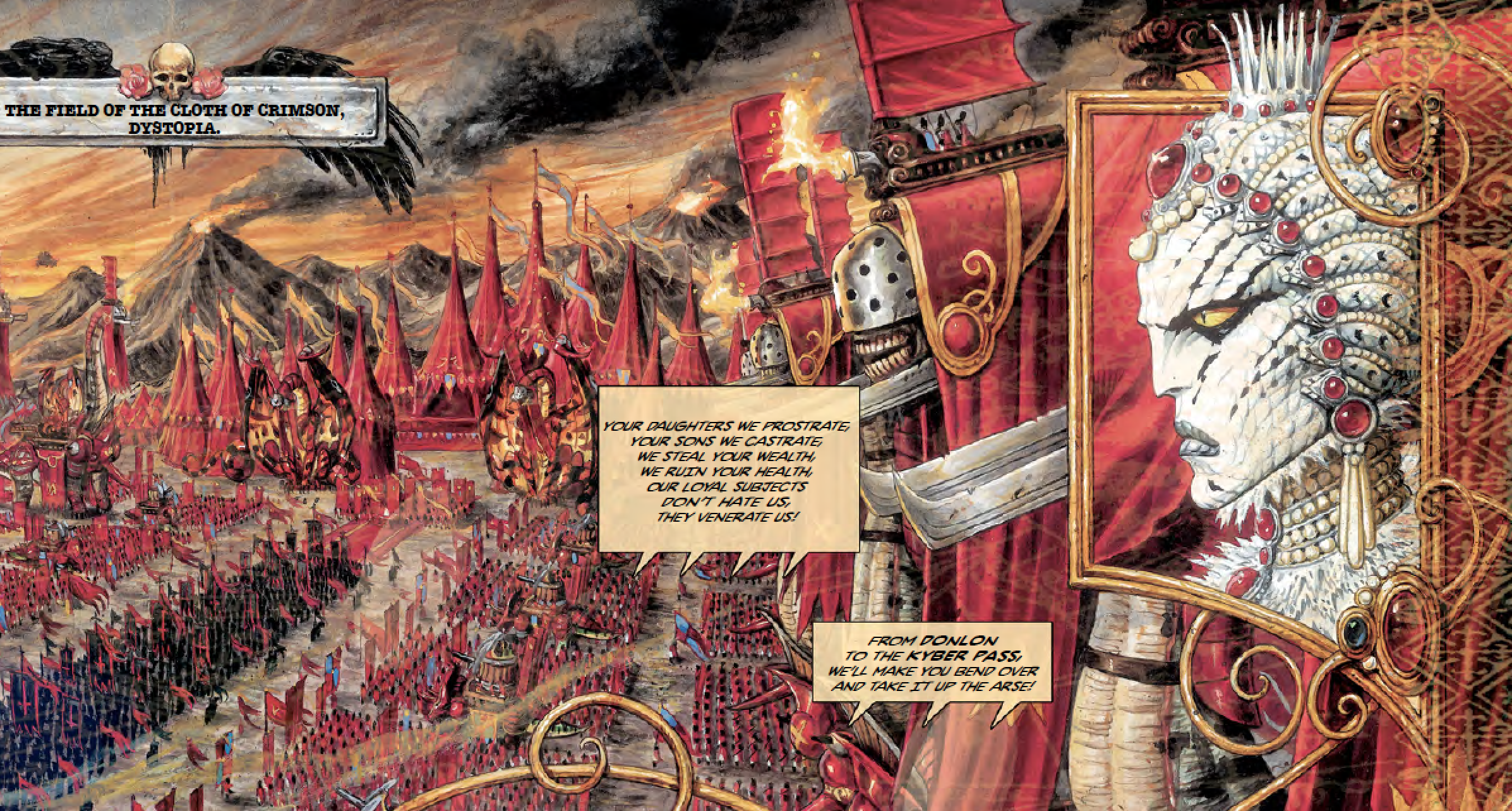 Requiem Vampire Knight 7 – The Convent of the Sisters of Blood, COPYRIGHT MILLS/TACITO/GLENAT

Similarly, on Mars, in the ABC Warriors, the city of Mekana is designed as one eternal building site, a foul vista of endless cranes with buildings being constantly erected and demolished. This was probably inspired by seeing so much callous demolition and brutal reconstruction when I was growing up in the 1960s. But worse: in this city, speech is discouraged and even banned in city centres, because the authorities want to control us through our thoughts. So most communication is by thoughtmail and there’s little human interaction. A reflection of today’s society and possibly the most nightmarish world I’ve ever devised (brilliantly visualised by Clint Langley). More so even than Termight, perhaps. Without an artist who has the same appetite and enthusiasm for world-building and designing hellish cities, there’s really not much point in a writer coming up with such lurid and outlandish ideas. They will invariably fall rather flat, as I’ve discovered to my cost. 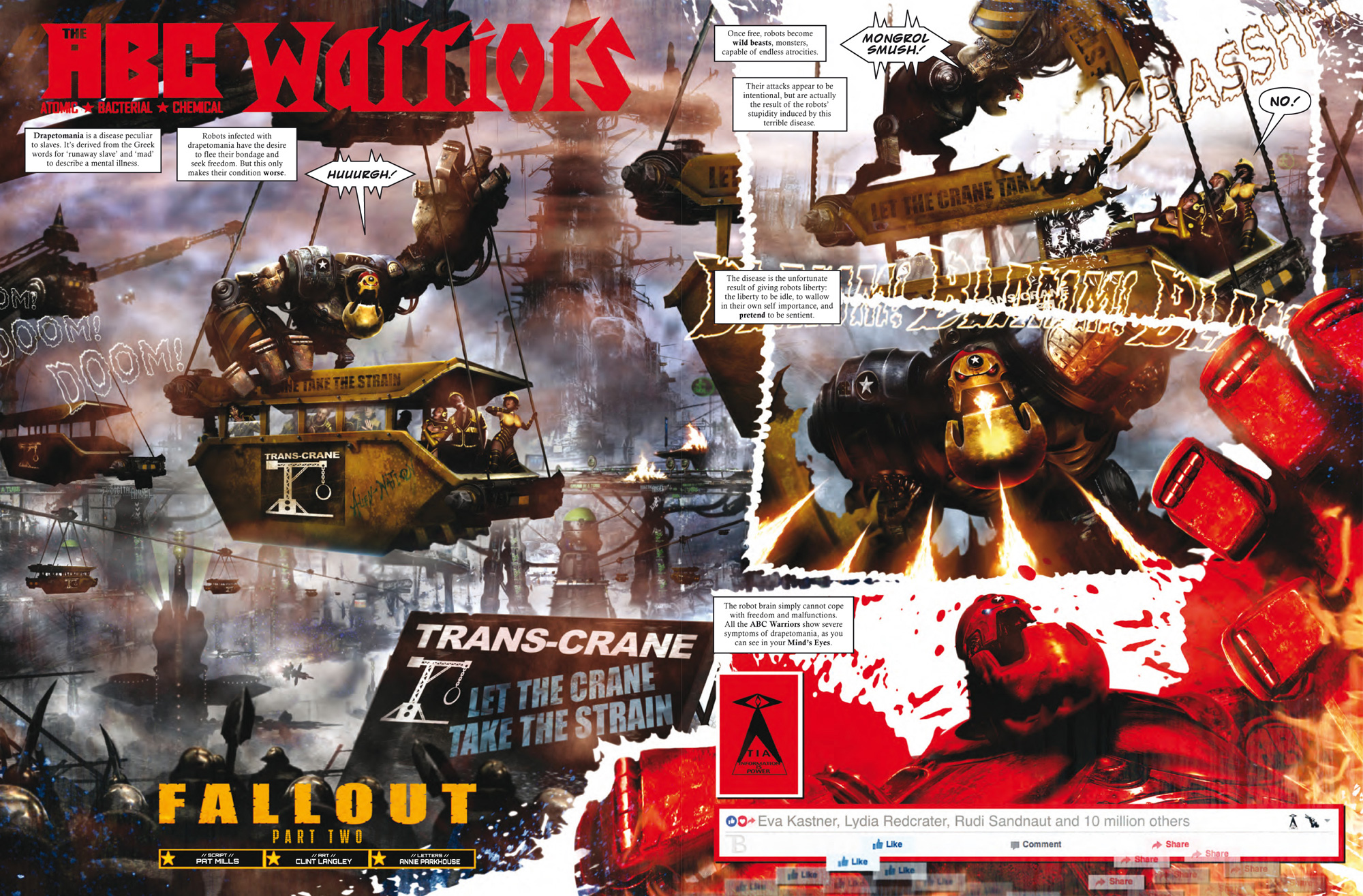 But nightmare worlds don’t have to be set in the future or in a fantasy past. Batman’s Gotham, New York, is a dark Gothic vista of the here and now. In Charley’s War, I spent some time building up a complex map of the trenches with names straight out of a Monopoly board, like Old Kent Road and Mayfair. The peculiar zig-zag shape of the trenches – rarely, if ever, shown to full advantage in movies – and the strange, heavily-cratered, troglodyte world that goes with it, makes them a unique and, visually, a post-apocalyptic ‘city’ all of its own, especially when it was brilliantly drawn by Joe Colquhoun. It’s easily a rival to any sf dystopia.

Similarly, I’m world-building for my assassin novel series, even though it’s set in the real world of London in 1917. Similar rules to fantasy apply, and such a London can still have its own unique noir, post-Ripper, Gothic character. A whole range of questions need to be asked, such as where does the assassin live? He has a Romany background, so currently he lives in a mews loft over a stable in Camden. The stable has the reassuring smells he remembers from his youth. And the nearby factories have useful story potential. But he will need another place where he keeps his weapons, disguises and illegal printing machine (a stencil duplicator/mimeograph). For this was an era where the grim truth of the Great War was deliberately concealed from the public (as it still is to this day). So his incriminating hardware will be kept in a basement flat in Kilburn. His Romany family still have a caravan out on Hackney Marshes but, fearful they could be implicated in his murders, he must keep his distance from them.

I mention these details because an essential element of world-building is setting things up for future volumes. Thus, in a future book, curious Irish republicans may quietly observe the stranger’s mysterious late night comings and goings in Kilburn, learn the truth about him, and ask him to do an assassination job for them. Probably to kill his mad, anti-Irish boss, who they have good reason to hate. Hackney Marshes represent the assassin’s spiritual home to which he is reluctantly drawn back, despite the terrible risks to his family. At the same time, he is involved in the elite world of the ruling classes in Whitehall, its offices and clubs, as well as the drug-taking populace of the city in the illegal Ragtime clubs of Soho or the Chinese laundries frequented by prostitutes and the underclass.

So, even before I’ve started writing the first book, it’s necessary for me to build a world that the protagonist can credibly exist in. Thanks largely to the internet, it’s possible to build a rich picture of London life in 1917, although its darkest side is trickier to find hard information on, certainly by comparison with the United States in the same era. Perfidious Albion has always been so much better at covering its tracks and presenting a jingoistic and self-approving account of its past that is canyon-wide from the truth.

So this is a world driven insane by war, a war deliberately provoked and deliberately prolonged when it could have ended in 1915. Instead, this truth has been concealed behind carefully constructed propaganda. It results in an ‘insane’ vigilante deciding to do something about it. As the Romany proverb that runs through the vigilante’s mind has it: ‘One madman makes many madmen, and many madmen make madness.’

That could be a description of Mega-City One.